Evonne Fay Goolagong Cawley (born 31 July 1951), known as Evonne Goolagong in her earlier career, is an Australian retired professional tennis player. Goolagong was one of the world's leading players in the 1970s and early 1980s and was the highest-ranked female Australian player on tour following the retirement of Margaret Court. At the age of 19, Goolagong won the French Open singles crown and the Australian Open doubles championships (with Margaret Court). She won the ladies' singles tournament at Wimbledon in 1971. In 1980, she became the first mother to win Wimbledon in 66 years. Goolagong would go on to win 14 Grand Slam tournament titles: seven in singles (four at the Australian Open, two at Wimbledon and one at the French Open), six in women's doubles, and one in mixed doubles. She represented Australia in three Fed Cup competitions, winning the title in 1971, 1973 and 1974, and was Fed Cup captain for three consecutive years. After retiring from professional tennis in 1983, Goolagong played in senior invitational competitions, endorsed a variety of products, worked as a touring professional, and held sports-related leadership roles. Goolagong was named Australian of the Year in 1971. She was appointed as a Member of the Order of the British Empire in 1972 and as an Officer of the Order of Australia in 1982. Goolagong was inducted into the Sport Australia Hall of Fame in 1985 and the International Tennis Hall of Fame in 1988. She leads the Goolagong National Development Camp for Indigenous boys and girls, which encourages Indigenous youth to stay in school.

Born Evonne Fay Goolagong, she is the third of eight children from an Australian Aboriginal (Wiradjuri) family. Her father, Ken Goolagong, was an itinerant sheep shearer and her mother, Melinda, was a homemaker. Evonne was born in Griffith, New South Wales, and grew up in the small country town of Barellan. Although Aboriginal people faced widespread discrimination in rural Australia at this time, Goolagong was able to play tennis in Barellan from childhood thanks to a local resident, Bill Kurtzman, who saw her peering through the fence at the local courts and encouraged her to come in and play. In 1965, Vic Edwards, the proprietor of a tennis school in Sydney, was tipped off by two of his assistants, travelled to Barellan to take a look at the young Goolagong, and immediately saw her potential. He persuaded Goolagong's parents to allow her to move to Sydney, where she attended Willoughby Girls High School. Here, she completed her School Certificate in 1968 and was at the same time coached by Edwards and lived in his household, with Edwards becoming her legal guardian, coach and manager.

Beginning during her playing days, Goolagong endorsed many products and appeared in numerous television and print commercials, extending these further once she retired from competitive play. Her various commercials included ''KFC'' (in which she appeared with her husband Roger), ''Geritol'' and ''Sears'', where she also promoted her own sports clothing brand 'Go Goolagong'. A one-off return to competitive action came at the 1985 Australian Indoor Championship organized by the ITF, but Cawley lost her only match. In 1988, she was inducted into the International Tennis Hall of Fame. In 1990, Goolagong began to play in senior invitational competitions, returning to Wimbledon to compete in the inaugural ladies senior invitational doubles, alongside compatriot Kerry Melville Reid. Goolagong spent some time as a touring professional at the Hilton Head Racquet Club in South Carolina before returning to Australia. Goolagong was a member of the Board of the Australian Sports Commission from 1995 to 1997 and since 1997 has held the position of Sports Ambassador to Aboriginal and Torres Strait Islander Communities. She was appointed captain of the Australian Fed Cup team in 2002. In 2003, she was winner for the Oceania region of the International Olympic Committee's 2003 "Women and Sports Trophy". She also runs an annual "Goolagong National Development Camp", with the aim of encouraging Aboriginal children to stay in school through playing competitive tennis. 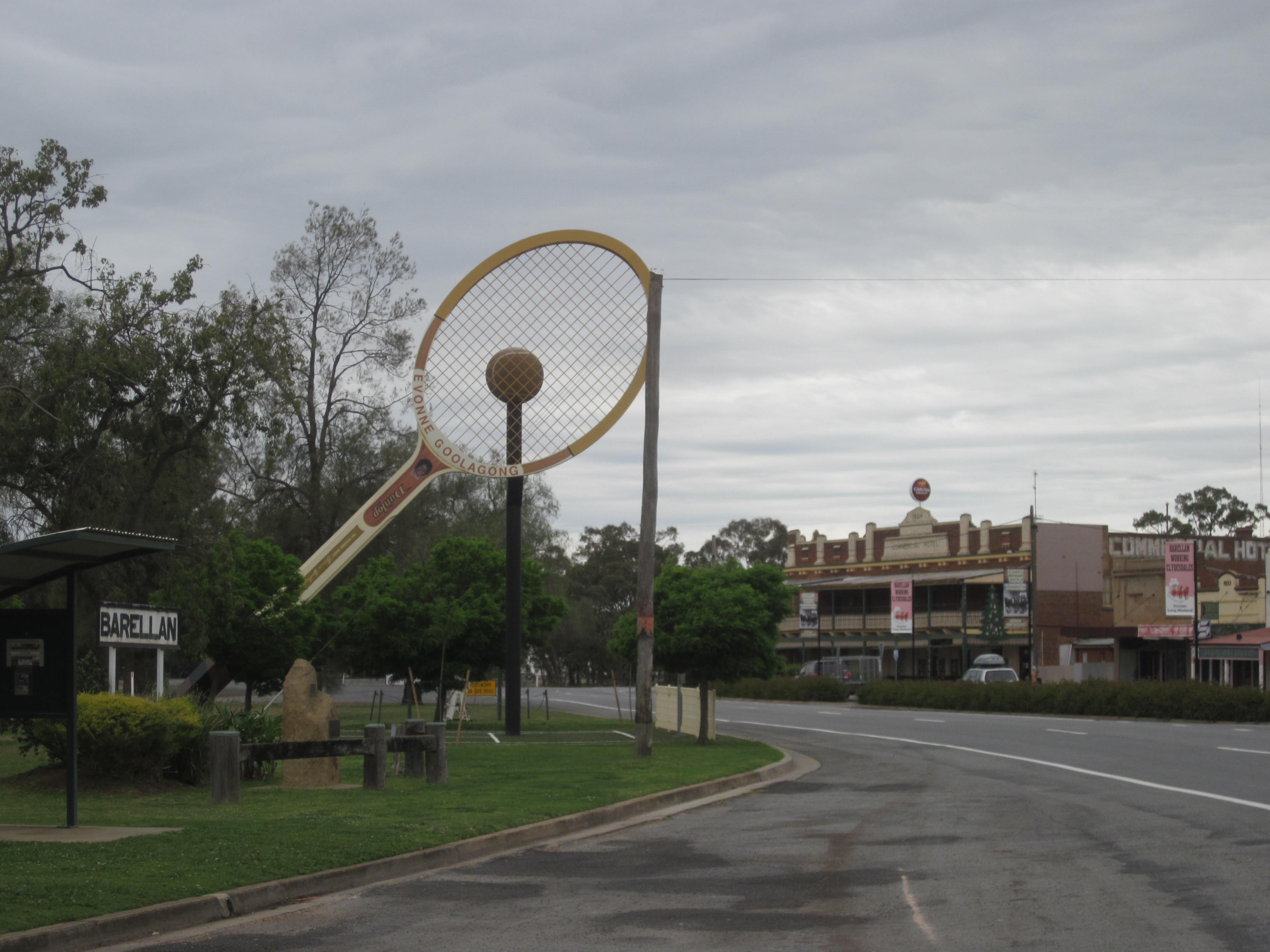 Goolagong was awarded Australian of the Year in 1971. She was appointed a Member of the Order of the British Empire in 1972 and made an Officer of the Order of Australia in 1982. In 1985 she was inducted into the Sport Australia Hall of Fame. In 1988, Goolagong was inducted into the International Tennis Hall of Fame. In 2018 she was advanced to a Companion of the Order of Australia "for eminent service to tennis as a player at the national and international level, as an ambassador, supporter and advocate for the health, education and wellbeing of young Indigenous people through participation in sport, and as a role model". In 1972, she played in a segregated South African tournament. To spare her the discrimination experienced by non-whites, the South African authorities classified her as an honorary white. In 1978 and 1980, she was awarded the WTA Sportsmanship Award. The Evonne Goolagong Cawley Trophy, awarded to the female champion at the Brisbane International, is named in her honour. In 1993, the State Transit Authority named a RiverCat ferry in Sydney after her. This rivercat travels daily from Parramatta to Circular Quay. The National Museum of Australia holds the Evonne Goolagong Cawley collection of memorabilia. This includes her 1971 and 1980 Wimbledon singles trophies, the trophy from her 1974 doubles win and two racquets used in these tournaments. The museum's collection also includes a signed warm-up jacket and a dress with a bolero style top designed by Ted Tinling in the early 1970s. In 2001, Goolagong was inducted into the Victorian Honour Roll of Women for her achievements as a tennis player. A long replica of a tennis racquet used by Goolagong has been built in Evonne Goolagong Park in Goolagong's hometown of Barellan. Goolagong unveiled the exact scale model of the wooden Dunlop racquet during Barellan's centenary celebrations on 3 October 2009. In February 2016, Goolagong and ten other Australian tennis players were honoured by Australia Post as the recipients of the 2016 Australia Post Legends Award and appeared on a postage stamp set named Australian Legends of Singles Tennis. In April 2016, Goolagong was awarded an honorary doctorate from the University of South Australia in recognition of her distinguished service to the community. In June 2018, the International Tennis Federation (ITF) presented her with its highest accolade, the Philippe Chatrier Award for her contributions to tennis.

When Victor Edwards became her coach, Goolagong went to live with him and his family and he became her legal guardian as well as her coach and manager. Goolagong later revealed that Edwards made sexual advances to her. When she met former junior British tennis player Roger Cawley in 1971, her relationship with Edwards became strained; however, she was legally tied to Edwards, who controlled every aspect of her career and finances until her marriage to Cawley on 19 June 1975. Goolagong severed all contact with Edwards at this juncture, although he remained her official coach for Wimbledon 1975; during the tournament, Edwards sat on the opposite side of the players box from Roger Cawley at her matches, and he and his protegee were no longer on speaking terms. Cawley became her coach, hitting partner and manager from the time they married. Following her wedding, she settled in Naples, Florida. Goolagong's father Ken was killed in a car crash in 1974, shortly after Edwards had refused to release any of her money to purchase a new family vehicle when requested. Her mother Melinda died in 1983. Intrigued by meeting so many Indigenous Australian relatives for the first time at the funeral, the Cawleys bought a home in Noosa Heads, Queensland and settled there with their two United States-born children. Daughter Kelly (born 1977) helps run her tennis camps, and son Morgan Kiema Cawley (born 1981) was a National Soccer League player. Goolagong's brother, Ian Goolagong, was a gifted amateur tennis player who never pursued the sport professionally; however, he partnered with Evonne in the mixed doubles tournament at Wimbledon 1982 (the pair lost their only match).

In the arts and popular culture

A play based on the life of Goolagong Cawley called ''Sunshine Super Girl'', written and directed by Andrea James, was to have premièred with the Melbourne Theatre Company in 2020, but the event was cancelled owing to the COVID-19 pandemic in Australia. Instead, it premiered in Griffith, New South Wales, in October 2020 before a run at the Sydney Festival in January 2021, produced by Performing Lines.

Note: The Australian Open was held twice in '77, in January and December. Goolagong won the December edition. She was seeded fourth for the 1980 US Open Championships, but withdrew from the tournament before play began.

* These records were attained in the Open Era of tennis. * Records in bold indicate peer-less achievements.

* Margaret Osborne duPont and Althea Gibson also hold these records; however, they attained those in the pre-Open Era. * The Australian Open was held twice in 1977, in January and December. Goolagong Cawley did not play in the January edition but made the final in the December tournament.