Eureka College is a private liberal arts college in Eureka, Illinois, that is related by covenant to the Christian Church (Disciples of Christ). Enrollment in 2018 was approximately 567 students. Eureka College was the third college in the United States to admit men and women on an equal basis. It has a close connection with alumnus Ronald Reagan, who graduated in 1932 with a degree in economics. In 2010, Eureka College was designated as a national historic district by the National Park Service. 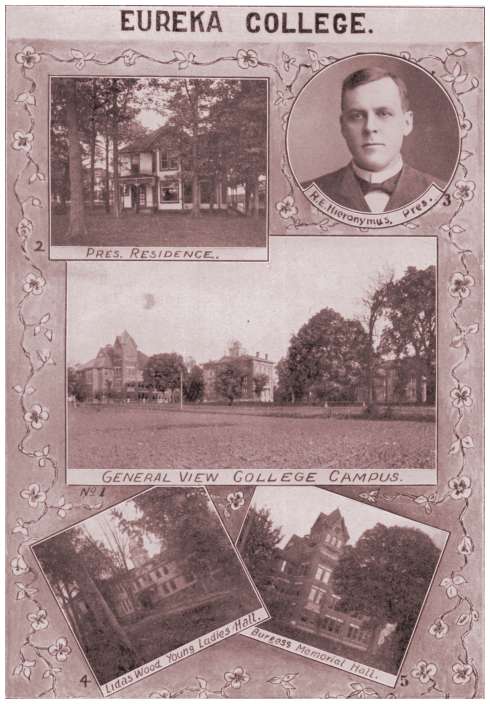 The college was founded in 1848 by a group of abolitionists who had left Kentucky because of their opposition to slavery and was originally named the Walnut Grove Academy. It was chartered in 1855. When the school was founded, it was the first school in Illinois (and only the third in the United States) to educate women on an equal basis with men. Abingdon College merged with Eureka in 1885.

Eureka College is the smallest college or university in American history to graduate a future U.S. President with a bachelor's degree. Among its alumni throughout history are forty-two college and university presidents, seven Governors and members of U.S. Congress, and the 40th President of the United States, Ronald Wilson Reagan, class of 1932. Ronald Reagan is the only president born, raised and educated in the state of Illinois. Reagan's relationship with his alma mater began in 1928 when he entered as a freshman from Dixon, Illinois, at age 17. Following his graduation on June 10, 1932, with a joint major in economics and sociology, Reagan returned for visits on twelve recorded occasions. He served on the board of trustees for three terms, stayed connected to his fraternity Tau Kappa Epsilon, communicated with his football coach and mentor Ralph "Mac" McKinzie, and helped support fund-raising drives including with his own financial commitments to the college. Reagan gave three commencement addresses at Eureka College in 1957, 1982 and 1992. He dedicated the Melick Library building in 1967 and the Reagan Physical Education Center in 1970. When he died in 2004, Eureka College was one of three officially designated recipients of memorial gifts by his family. In 1982, President Reagan told a Eureka College audience, "Everything that has been good in my life began here." He made similar statement at several other public speeches. Eureka College has created programs related to Reagan, with a goal of enhancing the educational experience for its students: * In 1982, Eureka College established the Ronald W. Reagan Leadership Program with President Reagan's blessing and assistance to provide scholarships, having awarded 128 four-year full tuition scholarships to designated Reagan Fellows. * In 1994, Eureka College established a museum named after Reagan to hold and interpret many items which he donated to the college during his lifetime, under the leadership of founding curator Dr. Brian Sajko. * In 2000, Eureka College dedicated the Reagan Peace Garden with a gift from central Illinois philanthropists Anne and David Vaughan to commemorate his important commencement speech at Eureka College in which Reagan called for nuclear arms reductions between the Soviet Union and the United States. * In 2008, Eureka College's president, J. David Arnold, launched a new effort known at "Reagan Forward" to build on the Reagan legacy with the unanimous backing of the board of trustees. * In 2008, Eureka College launched the Ronald W. Reagan Society to raise support for the college as a living legacy of Ronald Reagan and a national monument to American opportunity his story represents. * On March 27, 2009, Eureka College hosted former President of the Soviet Union Mikhail Gorbachev, the man of whom President Ronald Reagan famously demanded "Mr. Gorbachev, tear down this wall," in reference to the Berlin Wall that held citizens of East Berlin captive by threat of violence by the Communists. President Gorbachev visited the section of the Berlin Wall on display in the Reagan Peace Garden on campus. President Arnold gave President Gorbachev an honorary degree during a convocation in which students asked the former Soviet leader questions. * On March 31, 2009, Eureka College gave Nancy Reagan an honorary degree from her husband's alma mater at a private ceremony in the private quarters of the Ronald Reagan Presidential Library in Simi Valley, California. * On November 9, 2009, Eureka College celebrated the 20th anniversary of the fall of the Berlin Wall with speaker General P.X. Kelley USMC (Ret.). * Throughout 2010–11, Eureka College organized the Ronald Reagan Centennial Celebration whose honorary chairman was Governor Jim Edgar of Illinois. * On May 14, 2011, Eureka College held its 150th commencement coinciding with the year-long Ronald Reagan Centennial Celebration, and former Speaker of the U.S. House of Representatives Newt Gingrich delivered the commencement address. * January 13–15, 2011, Eureka College hosted an academic conference entitled "Reagan and the Midwest," designed to emphasize the study of the roots of Ronald Reagan. More than 15 scholars and authors attended including Martin Anderson and Annelise Anderson from the Hoover Institution at Stanford University, former United States Attorney General Edwin Meese III, journalist Fred Barnes, author Craig Shirley, author Peter Hannaford, and Midwest scholar Andrew Cayton. * In 2011, Eureka College dedicated the Mark R. Shenkman Reagan Research Center and College Archives within the Melick Library on campus. Funded by its namesake, the center is collecting and maintaining every book and doctoral dissertation ever written about Ronald Reagan as a resource for scholars, students, and public. * On March 28, 2012, Eureka College named James A. Baker III as an Honorary Reagan Fellow of Eureka College at a dinner ceremony hosted by the Ronald W. Reagan Society at the Union League Club of New York. * In celebration of the 103rd anniversary of Ronald Reagan's birthday, February 6, 2013, Eureka College announced a $1 million gift from the estate of President Reagan's brother Neil Reagan (Eureka College Class of 1933) and sister-in-law Bess. * On April 9, 2013, Justice Sandra Day O'Connor, the first woman to serve on the United States Supreme Court visited Eureka College where she was named an Honorary Reagan Fellow and gave a speech about her relationship with President Reagan. * The Honorable George P. Shultz, former U.S. Secretary of State, Treasury, Labor and Director of MBwas named Honorary Reagan Fellow at a Ronald W. Reagan Society ceremony in San Francisco in November 18, 2014.

The Ronald W. Reagan Museum, located within the Donald B. Cerf Center, contains a collection of objects and memorabilia largely donated by Reagan. The items are from his times as a student, actor, athlete, Governor of California and President of the United States. Admission is free.

* The Eureka College campus is . * Burrus Dickinson Hall, Administration building, is on the National Register of Historic Places. * The Chapel is the building where Ronald Reagan gave his first public speech. It is also on the National Register of Historic Places. * The Melick Library houses the Eureka College Archives. President Reagan gave a speech at its opening. * Sanders Hall, a four-story, 17,000 square foot academic building, opened on campus in 2014. The building is worth $6.7M and includes pristine classrooms, labs, and a student lounge. * The Reagan Athletic Complex (before 2015, known as the Reagan Physical Education Center or the Reagan Gym) was dedicated in 1970 by brothers Neil Reagan '33 and Ronald Reagan '32 and named in their honor. The center houses the basketball court, a swimming pool, weight rooms, and a state-of-the-art exercise center. In 1982, President Reagan announced the START treaty proposal in the Reagan Gym during the commencement address to the class of 1982. In 2015, The Bonati Fitness Center and Reagan Center Pool underwent renovation. These renovations included the rebuilding of the previously aged gym.

About 48% of the students at Eureka are women, while about 52% are men. 0.5% of the students are Native American, 0.35% are Asian, 8.5% are African-American, and 82% are white. 1.2% of the students are international, but 93.5% of the students are from the state of Illinois. The first-time, full-time bachelor's seeking student retention rate is 62% and the graduation rate cohort as percent of total entering students is 70%. The student-to-faculty ratio is 13 to 1. Eureka also offers one four-year, full-tuition scholarship to a student interested in pursuing ministry in the Christian Church (Disciples of Christ). Ministry Fellows receive two on-site mentorships exploring ministry, minor in Philosophy and Religion, are expected to live on campus, maintain a 3.0 GPA, fully participate in ECMF activities, and display exceptional leadership, spiritual growth and maturity.

Eureka College athletic teams, known as the Red Devils, participate at the NCAA Division III level. There are teams for men's and women's soccer, basketball, golf and track, as well as football, volleyball, baseball and softball. Eureka has competed as a member of the St. Louis Intercollegiate Athletic Conference since 2006. Eureka was a member of the Northern Illinois-Iowa Conference until the spring of 2006. Eureka College was also a member of the Illinois Intercollegiate Athletic Conference from 1910 to 1942. On September 1, 2012 Eureka College quarterback Sam Durley set an NCAA record with 736 passing yards in Eureka's 62–55 victory over Knox College. That beat the old record of 731 yards set by a Menlo College quarterback in 2000.