Click Here for Items Related To - Enabling Act of 1933


250px|Hitler's Reichstag speech promoting the bill was delivered at the Kroll_Opera_House,_following_the_[[Reichstag_fire..html" style="text-decoration: none;"class="mw-redirect" title="Reichstag_fire.html" style="text-decoration: none;"class="mw-redirect" title="Kroll Opera House, following the Kroll_Opera_House,_following_the_[[Reichstag_fire.">Reichstag_fire.html"_style="text-decoration:_none;"class="mw-redirect"_title="Kroll_Opera_House,_following_the_[[Reichstag_fire">Kroll_Opera_House,_following_the_[[Reichstag_fire. The_Enabling_Act_([[German_language.html" style="text-decoration: none;"class="mw-redirect" title="Reichstag fire">Kroll Opera House, following the [[Reichstag fire.">Reichstag_fire.html" style="text-decoration: none;"class="mw-redirect" title="Kroll Opera House, following the [[Reichstag fire">Kroll Opera House, following the [[Reichstag fire. The Enabling Act ([[German language">German: ') of 1933, formally titled ' ("Law to Remedy the Distress of People and [[Reich"), was a law that gave the [[Hitler Cabinet|German Cabinet—most importantly, the [[Chancellor of Germany|Chancellor—the power to enact laws without the involvement of the [[Reichstag (Weimar Republic)|Reichstag or consult with Weimar President Paul von Hindenburg, and to override fundamental aspects of the Weimar Constitution. The Enabling Act gave Hitler plenary powers and followed on the heels of the Reichstag Fire Decree. The decree abolished most civil liberties and transferred state powers to the German cabinet led by Hitler. The subsequent Enabling Act allowed the chancellor to pass and enforce laws without any objection. The combined effect of the two laws ultimately transformed Hitler's cabinet into a legal dictatorship and laid the groundwork for his totalitarian regime. The act passed in both the Reichstag and Reichsrat on 23 March 1933, and was signed by President Paul von Hindenburg later that day. The act would expire in four years pending a renewal from the Reichstag. The subsequent political repression from 1933 onward effectively made the Reichstag into the rubber stamp parliament that Hitler always wanted. The Enabling Act would be renewed twice and would be rendered null once the Nazis fell to the Allied powers in 1945. The law was enacted by the Reichstag (meeting at the Kroll Opera House), where non-Nazi members were surrounded and threatened by members of the SA and the SS. The Communists had already been repressed and were not allowed to be present or to vote, and some Social Democrats were kept away as well. In the end most of those present voted for the act, except for the Social Democrats, who voted against it. Contrary to popular belief, Adolf Hitler did not command a majority in the Reichstag as the majority of Germans did not vote for the Nazi party. Hitler through coercion, bribery, and manipulation removed any political obstacle while his coalition of conservative, nationalists, and Nazis built the Nazi dictatorship. The passing of the Enabling Act is significant in German and world history as it marked the transition from the democratic Weimar Republic to the totalitarian Nazi dictatorship. From 1933 onwards Hitler continued to consolidate and centralize power via purges and the Nuremberg Laws. The Hitlerian purges reached their height with the Night of the Long Knives. Once the purges of the Nazi party and German government concluded, Hitler had total control and authority to rearm and begin the political and military struggles that culminated in World War II.

After being appointed Chancellor of Germany on 30 January 1933, Hitler asked President von Hindenburg to dissolve the Reichstag. A general election was scheduled for 5 March 1933. A secret meeting was held between Hitler and 20 to 25 industrialists at the official residence of Hermann Göring in the Reichstag Presidential Palace, aimed at financing the election campaign of the Nazi Party. The burning of the Reichstag, depicted by the Nazis as the beginning of a communist revolution, resulted in the presidential Reichstag Fire Decree, which among other things suspended freedom of press and ''habeas corpus'' rights just five days before the election. Hitler used the decree to have the Communist Party's offices raided and its representatives arrested, effectively eliminating them as a political force. Although they received five million more votes than in the previous election, the Nazis failed to gain an absolute majority in parliament, and depended on the 8% of seats won by their coalition partner, the German National People's Party, to reach 52% in total. To free himself from this dependency, Hitler had the cabinet, in its first post-election meeting on 15 March, draw up plans for an Enabling Act which would give the cabinet legislative power for four years. The Nazis devised the Enabling Act to gain complete political power without the need of the support of a majority in the Reichstag and without the need to bargain with their coalition partners. The Nazi regime was unique compared to its contemporaries most famously Joseph Stalin because Hitler did not seek to draft a completely new constitution whereas Stalin did so. Technically the Weimar Constitution of 1919 remained in effect even after the Enabling Act. It lost force when Berlin fell to the Soviet Union in 1945 and Germany surrendered.

The Enabling Act allowed the National Ministry (essentially the cabinet) to enact legislation, including laws deviating from or altering the constitution, without the consent of the Reichstag. Because this law allowed for departures from the constitution, it was itself considered a constitutional amendment. Thus, its passage required the support of two-thirds of those deputies who were present and voting. A quorum of two-thirds of the entire Reichstag was required to be present in order to call up the bill. The Social Democrats (SPD) and the Communists (KPD) were expected to vote against the Act. The government had already arrested all Communist and some Social Democrat deputies under the Reichstag Fire Decree. The Nazis expected the parties representing the middle class, the Junkers and business interests to vote for the measure, as they had grown weary of the instability of the Weimar Republic and would not dare to resist. Hitler believed that with the Centre Party members' votes, he would get the necessary two-thirds majority. Hitler negotiated with the Centre Party's chairman, Ludwig Kaas, a Catholic priest, finalising an agreement by 22 March. Kaas agreed to support the Act in exchange for assurances of the Centre Party's continued existence, the protection of Catholics' civil and religious liberties, religious schools and the retention of civil servants affiliated with the Centre Party. It has also been suggested that some members of the SPD were intimidated by the presence of the Nazi Sturmabteilung (SA) throughout the proceedings. Some historians, such as Klaus Scholder, have maintained that Hitler also promised to negotiate a Reichskonkordat with the Holy See, a treaty that formalised the position of the Catholic Church in Germany on a national level. Kaas was a close associate of Cardinal Pacelli, then Vatican Secretary of State (and later Pope Pius XII). Pacelli had been pursuing a German concordat as a key policy for some years, but the instability of Weimar governments as well as the enmity of some parties to such a treaty had blocked the project. The day after the Enabling Act vote, Kaas went to Rome in order to, in his own words, "investigate the possibilities for a comprehensive understanding between church and state". However, so far no evidence for a link between the Enabling Act and the Reichskonkordat signed on 20 July 1933 has surfaced.

As with most of the laws passed in the process of ''Gleichschaltung'', the Enabling Act is quite short, especially considering its implications. The full text, in German and English, follows: Articles 1 and 4 gave the government the right to draw up the budget and approve treaties without input from the Reichstag. 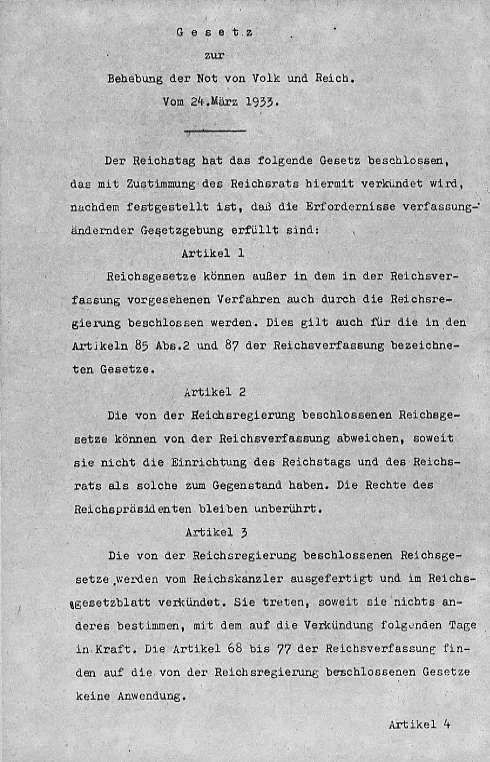 Debate within the Centre Party continued until the day of the vote, 23 March 1933, with Kaas advocating voting in favour of the act, referring to an upcoming written guarantee from Hitler, while former Chancellor Heinrich Brüning called for a rejection of the Act. The majority sided with Kaas, and Brüning agreed to maintain party discipline by voting for the Act. The Reichstag, led by its President, Hermann Göring, changed its rules of procedure to make it easier to pass the bill. Under the Weimar Constitution, a quorum of two-thirds of the entire Reichstag membership was required to be present in order to bring up a constitutional amendment bill. In this case, 432 of the Reichstag's 647 deputies would have normally been required for a quorum. However, Göring reduced the quorum to 378 by not counting the 81 KPD deputies. Despite the virulent rhetoric directed against the Communists, the Nazis did not formally ban the KPD right away. Not only did they fear a violent uprising, but they hoped the KPD's presence on the ballot would siphon off votes from the SPD. However, it was an open secret that the KPD deputies would never be allowed to take their seats; they were thrown in jail as quickly as the police could track them down. Courts began taking the line that since the Communists were responsible for the fire, KPD membership was an act of treason. Thus, for all intents and purposes, the KPD was banned as of 6 March, the day after the election.