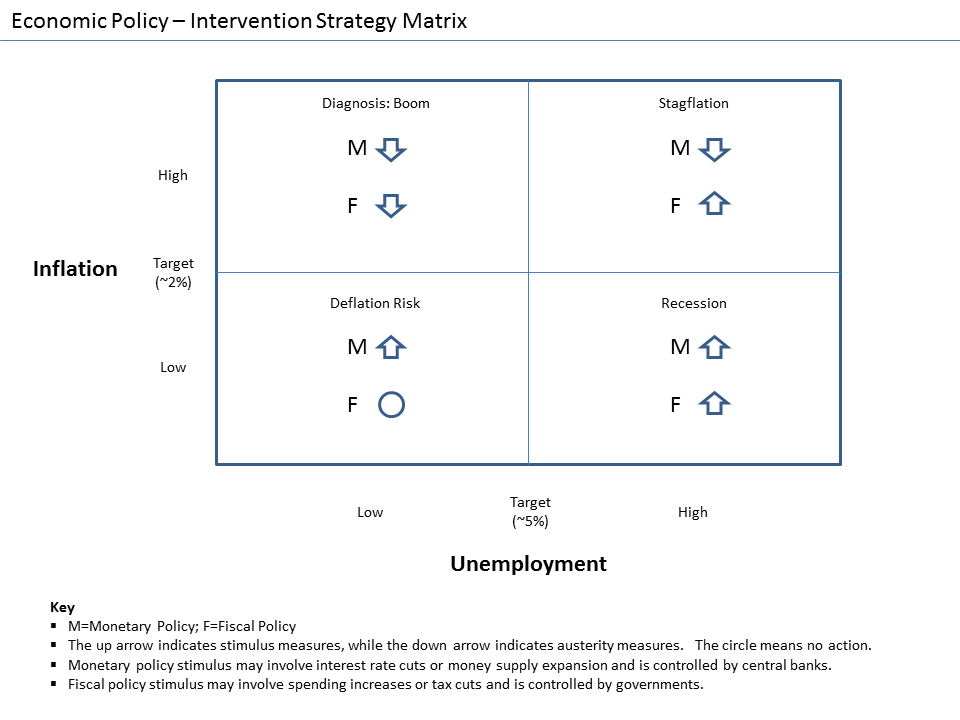 In economics, stimulus refers to attempts to use monetary policy or fiscal policy (or stabilization policy in general) to stimulate the economy. Stimulus can also refer to monetary policies such as lowering interest rates and quantitative easing. A stimulus is sometimes colloquially referred to as "priming the pump" or "pump priming".

During a recession, production and employment are far below their sustainable potential due to lack of demand. It is hoped that increasing demand will stimulate growth and that any adverse side effects from stimulus will be mild. Fiscal stimulus refers to increasing government consumption or transfers or lowering taxes, increasing the rate of growth of public debt. Supporters of Keynesian economics assume the stimulus will cause sufficient economic growth to fill that gap partially or completely via the multiplier effect. Monetary stimulus refers to lowering interest rates, quantitative easing, or other ways of increasing the amount of money or credit.

Milton Friedman argued that the Great Depression was caused by the fact that the Federal Reserve did not counteract the sudden reduction of money stock and velocity. Ben Bernanke argued, instead, that the problem was lack of credit, not lack of money, and hence, during the Great Recession, the Federal Reserve led by Bernanke provided additional credit, not additional liquidity (money), to stimulate the economy back on course. Jeff Hummel has analyzed the different implications of these two conflicting explanations. President of the Federal Reserve Bank of Richmond, Jeffrey M. Lacker, with Renee Haltom, has criticized Bernanke's solution because "it encourages excessive risk-taking and contributes to financial instability." Thomas M. Humphrey and Richard Timberlake concentrated in their book "Gold, the Real Bills Doctrine, and the Fed: Sources of Monetary Disorder 1922–1938" on the real bills doctrine as a causative factor in the Great Depression. It is often argued that fiscal stimulus typically increases inflation, and hence must be counteracted by a typical central bank. Hence only monetary stimulus could work. Counter-arguments say that if the output gap is high enough, the risk of inflation is low, or that in depressions inflation is too low but central banks are not able to achieve the required inflation rate without fiscal stimulus by the government. Monetary stimulus is often considered more neutral: decreasing interest rates make additional investments profitable, but yet only the most additional investments, whereas fiscal stimulus where the government decides the investments may lead to populism via public choice theory, or corruption. However, the government can also take externalities into account, such as how new roads or railways benefit users who do not pay for them, and choose investments that are even more beneficial although not profitable. Supporters of Keynesian economics are typically strongly in favor of stimulus. Austrian economic school and Rational expectations economists are typically against stimulus.