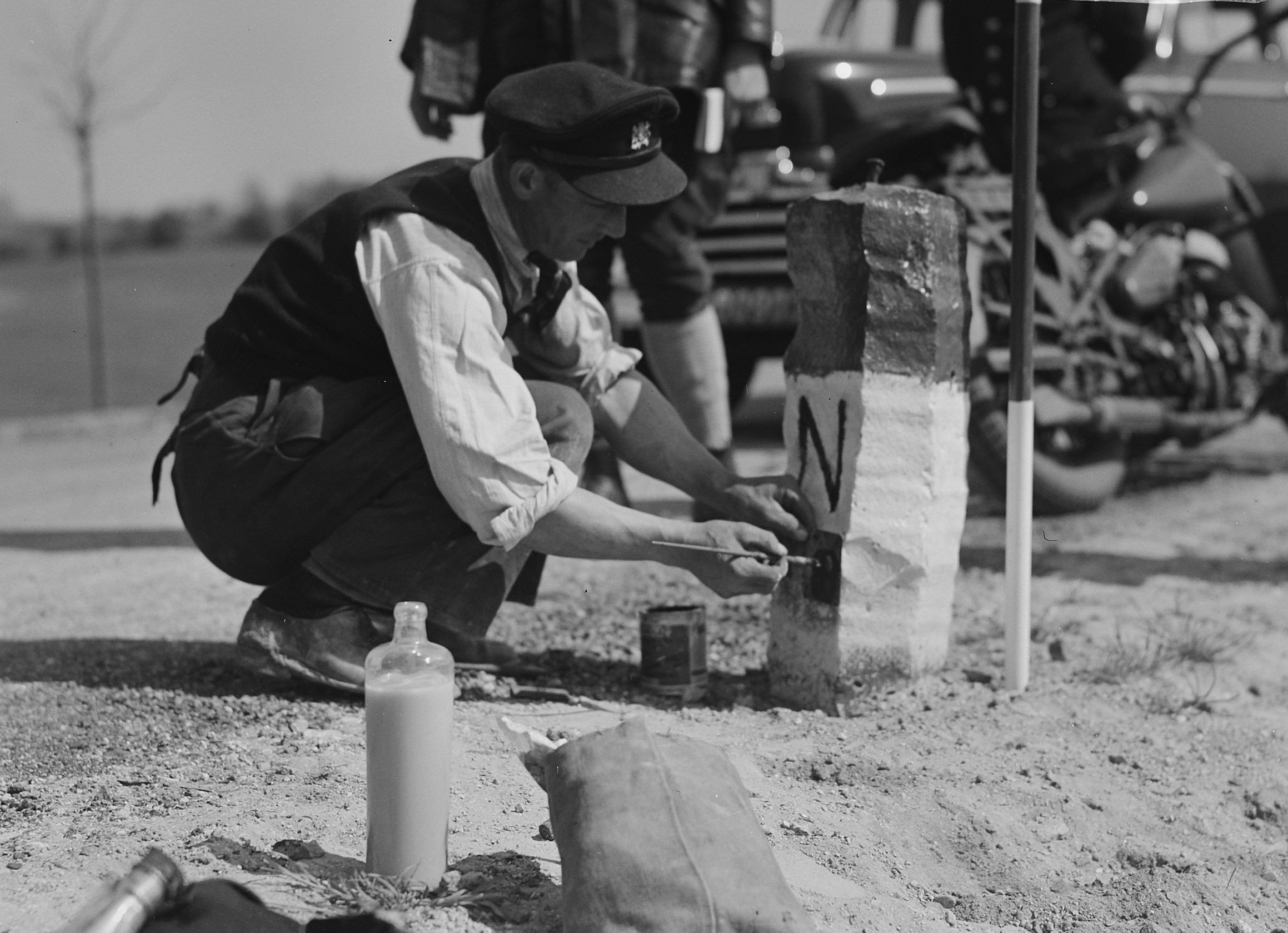 At the end of World War II, plans were made in the Netherlands to annex German territory as compensation for the damages caused by the war. In October 1945, the Dutch state asked Germany for 25 billion guilders in reparations. In February 1945 it had already been established at the Yalta Conference that reparations would not be given in monetary form. The plan which was worked out in most detail was the one made by , and hence became known as the Bakker-Schut Plan. In its most ambitious form, this plan included the cities of Cologne, Aachen, Münster and Osnabrück, and would have enlarged the country's European area by 30 to 50 percent. The local population had to be either deported, or, when still speaking the original Low German dialects, Dutchified. The plan was largely dropped after the U.S. rejected it. Eventually, an area of a total size of was allocated to the Netherlands. Almost all of this was returned to West Germany in 1963 after Germany paid the Netherlands 280 million German marks. Many Germans living in the Netherlands were declared "enemy subjects" after World War II ended and put into an internment camp in an operation called Black Tulip. A total of 3,691 Germans were ultimately deported.

In the first year following the liberation of the Netherlands in May 1945, dozens of pamphlets and brochures were published that focused on the integration of Western Germany into Western Europe and propagated annexation of territory of the former German Reich, preferably without the accompanying German population. Several highly placed persons, including then Foreign Minister Eelco Nicolaas van Kleffens, put forth their own ideas regarding annexation in these publications. Opinions varied widely as to how much territory should be annexed. Some people only wanted a few border corrections, others drew the new border past Hamburg. The proponents of annexation joined in several local committees. On 19 June 1945, the Hague committee to examine the question of Dutch territorial expansion was founded. During a meeting of this committee on 12 July 1945, it was decided to split the committee into the ''Study Group Territorial Expansion'' (Studiegroep Gebiedsuitbreiding), chaired by Ph.J. Idenburg, and the ''Action Committee'' (Comité van Actie), which had as its primary function the education of the Dutch population about the expansion plans. Six days later, the latter committee was renamed the ''Dutch Committee for Territorial Expansion''. It was chaired by former Finance minister Johannes van den Broek. On 25 August 1945, Minister Van Kleffens founded the ''State Commission for the Study of the Annexation Question'', which was charged with writing a final report regarding the annexation question by May 1946. The Study Group Territorial Expansion set up many groups that reported about their findings. The final judgment of the State Commission would be largely based on the results of this study group. The Dutch Committee for Territorial Expansion published on the progress of the study group by giving out brochures and giving lectures. The annexation question however led to intense discussions, which led certain groups to go their own way and among other things found the Annexation Committee of the Foundation for Agriculture.

Bakker Schut was the president of the National service for the National Plan, secretary of the Dutch Committee for Territorial Expansion, and a member of the State Commission for the Study of the Annexation Question and of the Study Group Territorial Expansion. In his expansion plan, he suggested to annex a large part of northwestern Germany. All the land west of the line Wilhelmshaven-Osnabrück-Hamm-Wesel would be added to the Netherlands, as well as the land east of Limburg, where the border followed the Rhine until close to Cologne, then diverging towards Aachen in the west. In the A Variation of the plan, among others the large cities of Aachen, Cologne, Münster, Oldenburg and Osnabrück were annexed. Bakker Schut called this the Weser border and ended his writings with the slogan ''Nederland's grens kome aan de Wezer'' (The border of the Netherlands be at the Weser). In a smaller plan B, the west-Rhineland cities Cologne, Mönchengladbach and Neuss were not annexed. In a third option, plan C, the proposed annexation was much smaller. It included an area west of Varel, the entire Emsland, and the area around Wesel until near the former Duchy of Cleves.

Areas to be annexed

500px|The Bakker-Schut Plan. To the left is the Netherlands, to the right is the part of [[Germany post WW II known as [[Lower Saxony and [[North Rhine-Westphalia. The coloured areas in the middle are the parts proposed for annexation by the Netherlands. The areas which were to be annexed according to the Bakker Schut Plan were the following then existing districts and cities.

Bakker Schut was aware that it was difficult to claim this area on historical grounds, due to the long-time German rule of the territory, and the historically German speaking population. Hence, he justified the annexation using arguments like increased power and greater security for the Dutch state. He furthermore considered the annexation as compensation for war damages and as a part of the population policy to be followed. Contrary to what might be expected, after an inventory he considered the natural resources of the territory to be annexed as insufficiently important to motivate annexation. In his view, even a transfer of the entire Ruhr Area would not be sufficient to pay for the damages.

A big point of discussion in Bakker Schut's expansion plan was the proposed forced migration of the original German population. Millions of Germans would have to be expelled to the remaining German territories, ostensibly because it was feared that increasing the Dutch population from 9 to 11 million people could cause trouble in providing everybody with food. A pamphlet titled ''Oostland - Ons Land'' (East land - Our land) contained a complete schedule for the expulsion of the population, starting with all inhabitants of municipalities with a population of at least 2,500, all former members of the NSDAP and related organizations, and all inhabitants who had settled in the area after 1933. In special cases, the inhabitants could request to be naturalized, for instance if they had made efforts for the Dutch state during the war, if they usually spoke Low Saxon instead of High German, if they had no family members up to the second degree that lived in Germany, or if they wished to become Dutch. <!-- Almost all these names are and were existing Low German and/or Dutch place names (Monniken-Glaabbeek may be an exception); they were not invented for the annexation plan as suggested by including it here in this article </big>

It was also already determined which Dutch names the cities and areas in the territory to be annexed would get. The table below gives a small sample of the suggested name changes. }; short: Ausgleichsvertrag, i.e. treaty of settlement) made in the Hague on 8 April 1960, in which West Germany agreed to pay 280 million German marks for the return of Elten, Selfkant, and Suderwick, as ''Wiedergutmachung''. The territory was returned to West Germany on 1 August 1963, except one small hill (about ) near Wyler village, called Duivelsberg/Wylerberg which was annexed by the Netherlands.