Dogri (Dogra: , Devanagari: डोगरी; Nasta'liq: ; pronunciation: ) is a Northern Indo-Aryan language spoken by about five million people in India, chiefly in the Jammu region of Jammu and Kashmir. It is also spoken in the state of Himachal Pradesh, and in northern Punjab region, other parts of Jammu and Kashmir, and elsewhere. Dogri speakers are called Dogras, and the Dogri-speaking region is the Jammu region. Dogri is now considered to be a member of the Western Pahari group of languages. Unusually for an Indo-European language, Dogri is tonal, a trait it shares with other Western Pahari languages and Punjabi. Dogri has several varieties, all with greater than 80% lexical similarity (within Jammu and Kashmir). Dogri is one of the 22 official languages of India. It was added in the 8th schedule of the constitution in 2003.

Dogri was originally written in Dogra Akkhar script which is an adaptation of Takri Script. It is now more commonly written in Devanagari in India, and in the Nastaʿliq form of Perso-Arabic in Pakistan and Pakistani-administered Kashmir. The Dogra Script was standardised from Chambeali Takri Script during the Dogra rule. This script was then called "''Namme Dogra Akkhar'' " (Dogra: ). 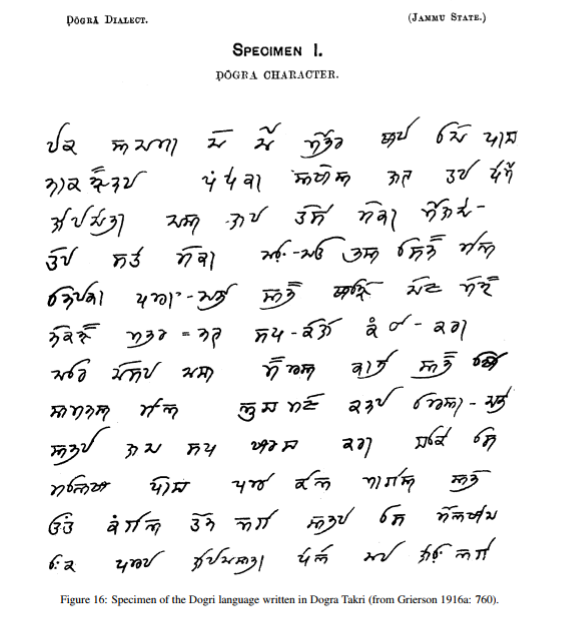 The Greek astrologer Pulomi, accompanying Alexander in his 323 B.C. campaign into the Indian subcontinent, referred to some inhabitants of Duggar as "a brave Dogra family living in the mountain ranges of Shivalik." In the year 1317, Amir Khusro, the famous Urdu and Persian poet, referred to Duger (Dogri) while describing the languages and dialects of India as follows: ''"Sindhi-o-Lahori-o-Kashmiri-o-Duger."''

Intellectuals in the court of Maharaja Ranbir Singh s/o Gulab Singh of Jammu and Kashmir, described 'Duggar' as a distorted form of the word 'Dwigart,' which means "two troughs," a possible reference to the Mansar and Sruinsar Lakes. The linguist George Grierson connected the term 'Duggar' with the Rajasthani word 'Doonger,' which means 'hill,' and 'Dogra' with 'Dongar.' This opinion has lacked support because of the inconsistency of the ostensible changes from Rajasthani to Dogri (essentially the question of how Doonger became Duggar while Donger became Dogra), and been contradicted by some scholars. Yet another proposal stems from the presence of the word 'Durger' in the Bhuri Singh Museum (in Chamba, Himachal Pradesh). The word Durger means 'invincible' in several Northern Indian languages, and could be an allusion to the ruggedness of the Duggar terrain and the historically militarized and autonomous Dogra societies. In Himachal, Dogri is majorly spoken in Hamirpur, Barsar, Una, Chintpurni, Kangra, and Bilaspur regions. In 1976, the experts attending the Language Session of the 'All India Oriental Conference' held in Dharwad, Karnataka, could not reach consensus on the 'Dwigart' and 'Durger' hypotheses, but did manage agreement on a Doonger-Duggar connection. In a subsequent 'All India Oriental Conference' held at Jaipur in 1982, the linguists agreed that the culture, language and history of Rajasthan and Duggar share some similarities. It was also suggested that the words 'Duggar' and 'Dogra' are common in some parts of Rajasthan. Specifically, it was asserted that areas with many forts are called Duggar, and their inhabitants are accordingly known as Dogras. The land of Duggar also has many forts, which may support the opinion above. An article by Dharam Chand Prashant in the literary magazine Shiraza Dogri suggested that ''"the opinion that the word 'Duggar' is a form of the word 'Duggarh' sounds appropriate."'' The Turkish ''Döğer'' is also the name of a Turkmen Oğuz tribe originating in Central Asia and also found amongst the Kurds. In Turkey one of the towns named after them can be written as Doker, Duger, Döker and Düğer.

In modern times, a notable Dogri translation (in the Takri script) of the Sanskrit classic mathematical opus ''Lilavati'', by the noted mathematician Bhaskaracharya (b. 1114 AD), was published by the Vidya Vilas Press, Jammu in 1873. As Sanskrit literacy remained confined to a few, the late Maharaja Ranbir Singh had the ''Lilavati'' translated into Dogri by Jyotshi Bisheshwar, then principal of Jammu Pathshala. Dogri has an established tradition of poetry, fiction and dramatic works. Recent poets range from the 18th-century Dogri poet Kavi Dattu (1725–1780) in Raja Ranjit Dev's court to Professor Ram Nath Shastri and Mrs. Padma Sachdev. Kavi Dattu is highly regarded for his ''Barah Massa'' (Twelve Months), ''Kamal Netra'' (Lotus Eyes), ''Bhup Bijog'' and ''Bir Bilas''. ''Shiraza Dogri'' is a Dogri literary periodical issued by the Jammu and Kashmir Academy of Art, Culture and Languages, which is a notable publisher of modern Dogri literary work, another being the ''Dogri Sanstha''. Popular recent songs include ''Pala Shpaiya Dogarya'', ''Manney di Mauj'' and ''Shhori Deya''. The noted Pakistani singer Malika Pukhraj had roots in the Duggar region, and her renditions of several Dogri songs continue to be popular in the region. Some devotional songs, or bhajans, composed by Karan Singh have gained increasing popularity over time, including ''Kaun Kareyaan Teri Aarti''. Dogri programming features regularly on Radio Kashmir (a division of All India Radio), and Doordarshan (Indian state television) broadcasts in Jammu and Kashmir. However, Dogri does not have a dedicated state television channel yet, unlike Kashmiri (which has the Doordarshan Koshur channel, available on cable and satellite television throughout India)
The Straight Line
a digital news portal in Jammu took the initiative o
Dogri news reporting
by creating more than 700 videos in Dogri. Pragya Salhotra, their Dogri head helped in bringing Dogri to the mainstream by reporting on serious issues, doing satire as well as having discussions in Dogri. Her signature style “''Aaun Pragya Salhotra tunda mata mata malaar karni aan”'' was loved and adored by many. Official recognition of the language has been gradual, but progressive. On 2 August 1969, the General Council of the Sahitya Academy, Delhi recognized Dogri as an "independent modern literary language" of India, based on the unanimous recommendation of a panel of linguists. (Indian Express, New Delhi, 3 August 1969). Dogri is one of the state languages of the Indian union territory of Jammu and Kashmir. On 22 December 2003, in a major milestone for the official status of the language, Dogri was recognized as a national language of India in the Indian constitution. In Pakistan, the language (under the name "Pahari") continues to thrive, but is not known to have received official patronage to date. The Alami Pahari Adabi Sangat (Global Pahari Cultural Association) is a Pakistani organization dedicated to the advancement and progress of the language. In 2005, a collection of over 100 works of prose and poetry in Dogri published over the last 50 years was made accessible online at the Central Institute of Indian Languages (CIIL), Mysore. This included works of eminent writer Dhinu Bhai Panth, Professor Madan Mohan Sharma, B.P. Sathai and Ram Nath Shastri.

"One Hundredth Amendment," news report on the recognition of Dogri as a national language.
Modifications to Devanagri to represent Dogri tones