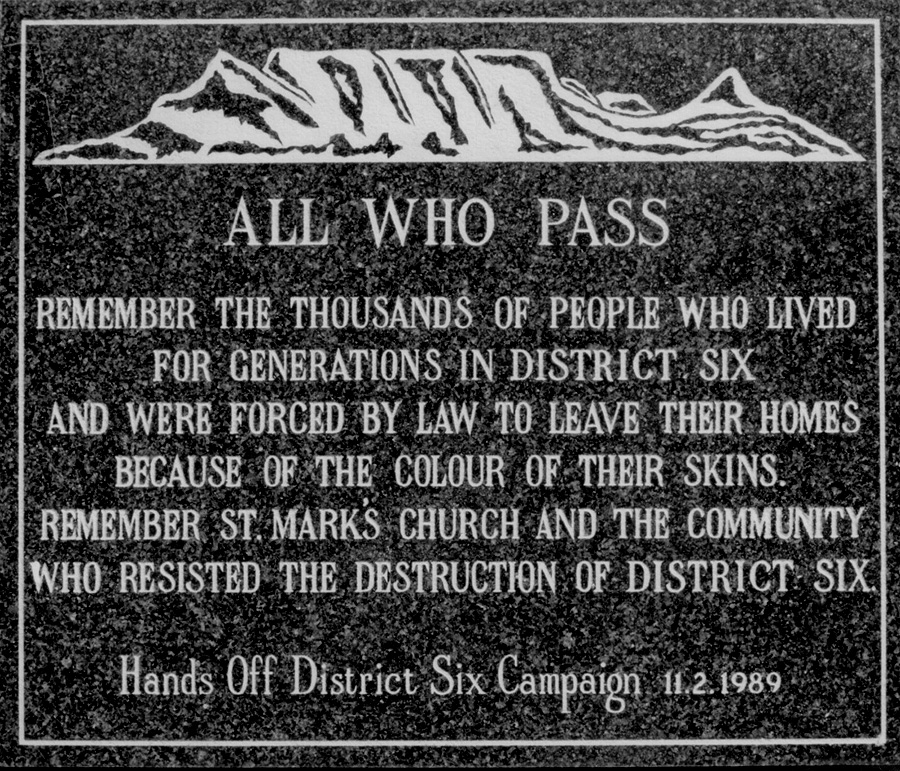 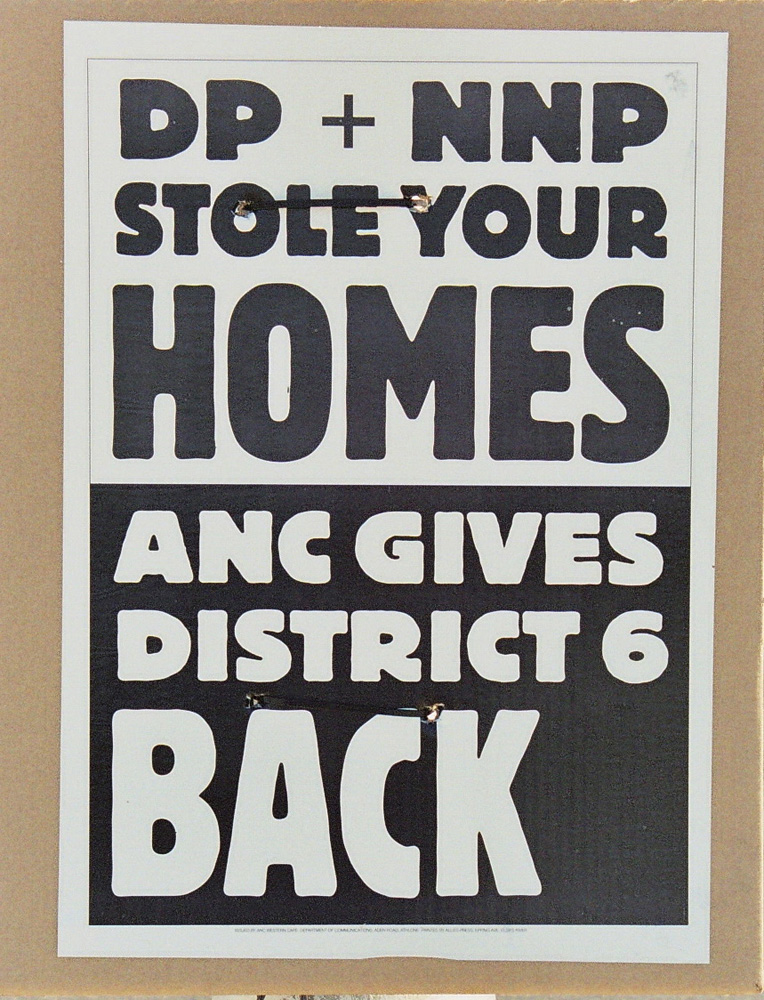 District Six (Afrikaans ''Distrik Ses'') is a former inner-city residential area in Cape Town, South Africa. Over 60,000 of its inhabitants were forcibly removed during the 1970s by the apartheid regime. The area of District Six is now partly divided between the suburbs of Walmer Estate, Zonnebloem, and Lower Vrede, while the rest is undeveloped land.

The area was named in 1867 as the ''Sixth Municipal District of Cape Town''. The area began to grow after the freeing of the enslaved in 1833. In the 1960/70's large slum areas were demolished as part of the apartheid movement which the Cape Town municipality at the time had written into law by way of the Group Areas Act (1950). This however did not come into enforcement until 1966 when District Six was declared a 'whites only' area, the year demolition began. New buildings soon arose from the ashes and flourished. The District Six neighbourhood is bounded by Sir Lowry Road on the north, Buitenkant Street to the west, De Waal Drive on the south and Mountain Road to the east. By the turn of the century it was already a lively community made up of former slaves, artisans, merchants and other immigrants, as well as many Malay people brought to South Africa by the Dutch East India Company during its administration of the Cape Colony. It was home to almost a tenth of the city of Cape Town's population, which numbered over 1,700–1,900 families. After World War II, during the earlier part of the apartheid era, District Six was relatively cosmopolitan. Situated within sight of the docks, it was made up largely of coloured residents which included a substantial number of coloured Muslims, called Cape Malays. There were also a number of black Xhosa residents and a smaller numbers of Afrikaners, English-speaking whites, and Indians. Government officials gave four primary reasons for the removals. In accordance with apartheid philosophy, it stated that interracial interaction bred conflict, necessitating the separation of the races. They deemed District Six a slum, fit only for clearance, not rehabilitation. They also portrayed the area as crime-ridden and dangerous; they claimed that the district was a vice den, full of immoral activities like gambling, drinking, and prostitution. Though these were the official reasons, most residents believed that the government sought the land because of its proximity to the city centre, Table Mountain, and the harbour. On 2 October 1964 a departmental committee set up by the Minister of Community Development met to investigate the possible replanning and development of District Six and adjoining parts of Woodstock and Salt River. On June 1965, the Minister announced a 10-year scheme for the re-planning and development of District Six under CORDA-the Committee for the Rehabilitation of Depressed Areas. On 12 of June 1965, all property transactions in District Six were frozen. A 10-year ban was imposed on the erection or alteration of any building.

Interview with museum director on history of District Six, purpose of museum

Community Video Education Trust: a digital archive of 90 hours of videos taken in South Africa in the late 1980s and early 1990s including women of Lavender Hill talking about removals from District Six (June 6, 1985) and Albie Sachs at District 6 on his return from exile (1991). Other raw footage documents anti-apartheid demonstrations, speeches, mass funerals, celebrations, and interviews with activists that capture the activism of trade unions, students and political organizations mostly in Cape Town.

Interview with District Six Museum founder about his life in District Six and his motivation to start the museum.