Click Here for Items Related To - Cuisine of Hawaii

The cuisine of Hawaii incorporates five distinct styles of food, reflecting the diverse food history of settlement and immigration in the Hawaiian Islands. In the pre-contact period of Ancient Hawaii (300 AD-1778), Polynesian voyagers brought plants and animals to the Islands. As Native Hawaiians settled the area, they fished, raised taro for ''poi'', planted coconuts, sugarcane, sweet potatoes and yams, and cooked meat and fish in earth ovens. After first contact in 1778, European and American cuisine arrived along with missionaries and whalers, who introduced their own foods and built large sugarcane plantations. Christian missionaries brought New England cuisine while whalers introduced salted fish which eventually transformed into the side dish lomilomi salmon. As pineapple and sugarcane plantations grew, so did demand for labor, bringing many immigrant groups to the Islands between 1850 and 1930. Immigrant workers brought cuisines from China, Korea, Japan, the Philippines, Puerto Rico and Portugal after arriving in Hawaii, introducing their new foods and influencing the region. The introduction of new ethnic foods, such as Chinese ''char siu bao'' (''manapua''), Portuguese sweet bread and ''malasadas'', Puerto Rican ''pasteles'', and the Japanese ''bento'', combined with the existing indigenous, European and American foods in the plantation working environments and in the local communities. This blend of cuisines formed a "local food" style unique to Hawaii, resulting in plantation foods like the plate lunch, snacks like Spam musubi, and dishes like the loco moco. Shortly after World War II several well known local restaurants opened their doors to serve "Hawaiian Food". Chefs further refined the local style by inventing Hawaii Regional Cuisine in 1992, a style of cooking that makes use of locally grown ingredients to blend all of Hawaii's historical influences together to form a new fusion cuisine.

When Polynesian seafarers arrived on the Hawaiian Islands in 300–500 AD, few edible plants existed in the new land, aside from ferns (''hāpuʻu ʻiʻi,'' whose uncoiled fronds are eaten boiled) and fruits that grew at higher elevations. Botanists and archaeologists believe that the Polynesian voyagers introduced anywhere between 27 and more than 30 plants to the islands, known as canoe plants, mainly for food. The most important of them was taro. For centuries taro, and the ''poi'' made from it, was the main staple of their diet, and it is still much loved today. In addition to taro the Polynesians brought sweet potatoes. These are believed to have come from Polynesian contact with the New World. The Marquesans, the first settlers from Polynesia, brought breadfruit and the Tahitians later introduced the baking banana. These settlers from Polynesia also brought coconuts, candlenuts (known in Hawaiian as kukui nuts), and sugarcane. They found plenty of fish, shellfish, and limu in the new land. Flightless birds were easy to catch and nests were full of eggs for the taking. Most Pacific islands had no meat animals except bats and lizards, so ancient Polynesians sailed the Pacific with pigs, chickens and dogs as cargo. Pigs were raised for religious sacrifice, and the meat was offered at altars, some of which was consumed by priests and the rest eaten in a mass celebration. The early Hawaiian diet was diverse, and may have included as many as 130 different types of seafood and 230 types of sweet potatoes. Some species of land and sea birds were consumed into extinction. 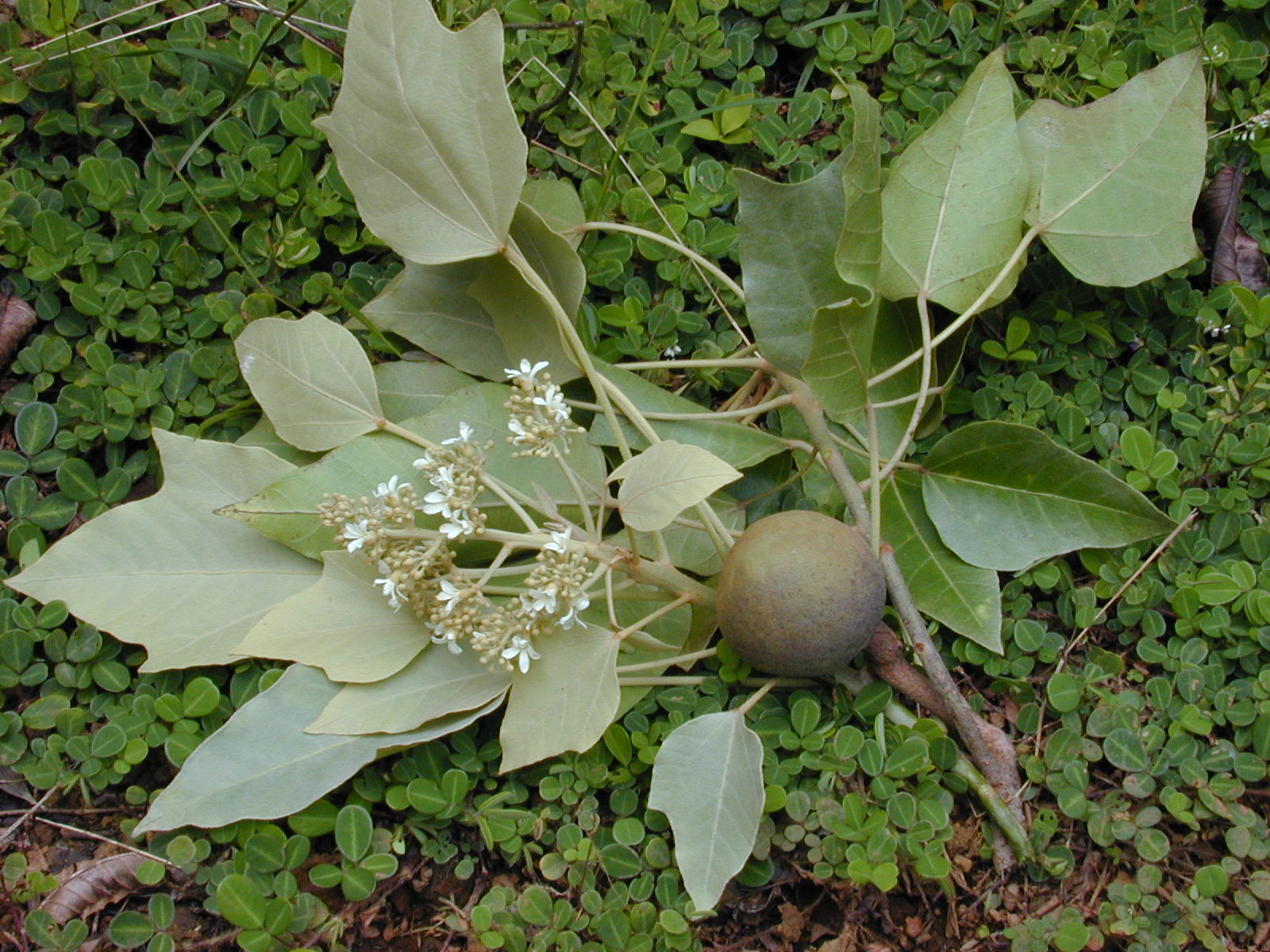 Sea salt was a common condiment in ancient Hawaii, and ''Inamona'', a relish made of roasted, mashed ''kukui'' nutmeats, sea salt and sometimes mixed with seaweeds, often accompanied the meals. At important occasions, a traditional feast, ''‘aha‘aina'', was held. When a woman was to have her first child, her husband started raising a pig for the ''‘Aha‘aina Mawaewae'' feast that was celebrated for the birth of a child. Besides the pig, mullet, shrimp, crab, seaweeds and taro leaves were required for the feast. The modern name for such feasts, ''lū‘au'', was not used until 1856, replacing the Hawaiian words ''‘aha‘aina'' and ''pā‘ina''. The name ''lū‘au'' came from the name of a food always served at a ''‘aha‘aina,'' young taro tops baked with coconut milk and chicken or octopus. Prior to cooking, pigs and dogs were killed by strangulation or by holding their nostrils shut, in order to conserve the animal's blood. Meat was prepared by flattening out the whole eviscerated animal and broiling it over hot coals, or it was spitted on sticks. Large pieces of meat, such as fowl, pigs and dogs, would be typically cooked in earth ovens, or spitted over a fire during ceremonial feasts. Hawaiian earth ovens, known as an ''imu'', combine roasting and steaming in a method called ''kālua''. A pit is dug into earth and lined with volcanic rocks and other rocks that do not split when heated to a high temperature, such as granite. A fire is built with embers, and when the rocks are glowing hot, the embers are removed and the foods wrapped in ''ti'', ginger or banana leaves are put into the pit, covered with wet leaves, mats and a layer of earth. Water may be added through a bamboo tube to create steam. The intense heat from the hot rocks cooked food thoroughly—the quantity of food for several days could be cooked at once, taken out and eaten as needed, and the cover replaced to keep the remainder warm. Sweet potatoes, taro, breadfruit and other vegetables were cooked in the ''imu'', as well as fish. Saltwater eel was salted and dried before being put into the ''imu''. Chickens, pigs and dogs were put into the ''imu'' with hot rocks inserted in the abdominal cavities. Men did all of the cooking, and food for women was cooked in a separate ''imu''; afterwards men and women ate meals separately. The ancient practice of cooking with the ''imu'' continues to this day, for special occasions.

In 1778, Captain James Cook arrived at the island of Niihau, leaving a ram goat, ewes, a boar, an English sow, and seeds for melons, pumpkins, and onions. In 1793, Captain George Vancouver brought the first cattle to the islands; longhorns from California were presented to King Kamehameha I. With no natural predators, the new cattle multiplied out of control; the king hired an American man named John Parker to capture and domesticate cattle. Many of the cattle were butchered and beef was introduced to Hawaiian cuisine. In 1813, pineapple was first cultivated in Honolulu by Don Francisco de Paula Marin, a Spanish botanist and advisor to King Kamehameha I. Although grape vines were introduced by Captain Vancouver around 1792, Marin is credited with the first Hawaiian vineyard in 1815 and planting the now rare Mission grape variety. Marin also brewed the first beer in 1812, and planted the first coffee crop in 1817, but his plantings failed. Marin, called "Manini" by the Hawaiians, experimented with planting oranges, limes, beans, cabbages, potatoes, peaches, melons, maize and lettuce. By the late 19th century, pineapple and sugarcane plantations owned and run by American settlers took over much of Hawaii's land, and these two crops became the most important sources of revenue for the Hawaiian economy.

As the plantations of the Big Five expanded, the demand for labor grew, so the plantation owners hired immigrant workers, which included Chinese, Koreans, Japanese, Filipinos, and Portuguese. Each ethnic group wanted its own food in workplaces, and farms and grocery markets were established. The Chinese immigrants brought Cantonese cuisine, cooking the first stir fry, sweet and sour, and dim sum dishes in the islands, and replaced ''poi'' with rice, adding their own herbs and spices. Chinese rice growers imported familiar fish varieties from Asia to stock local streams and irrigation ditches. Korean immigration to Hawaii brought kimchi and built barbecue pits to cook marinated meats. Korean-style ''bulgogi'' or boneless meat with moderately sweet garlic sauce and ''galbi'' or meat with bones and moderately sweet garlic sauce as well, and another Korean favorite ''bibimbab'' or mixed rice with seasoned vegetables, ''namul'', sweet and spicy ''gochujang'' and ''bulgogi'' topping also became an integral part of Hawaiian cuisine. 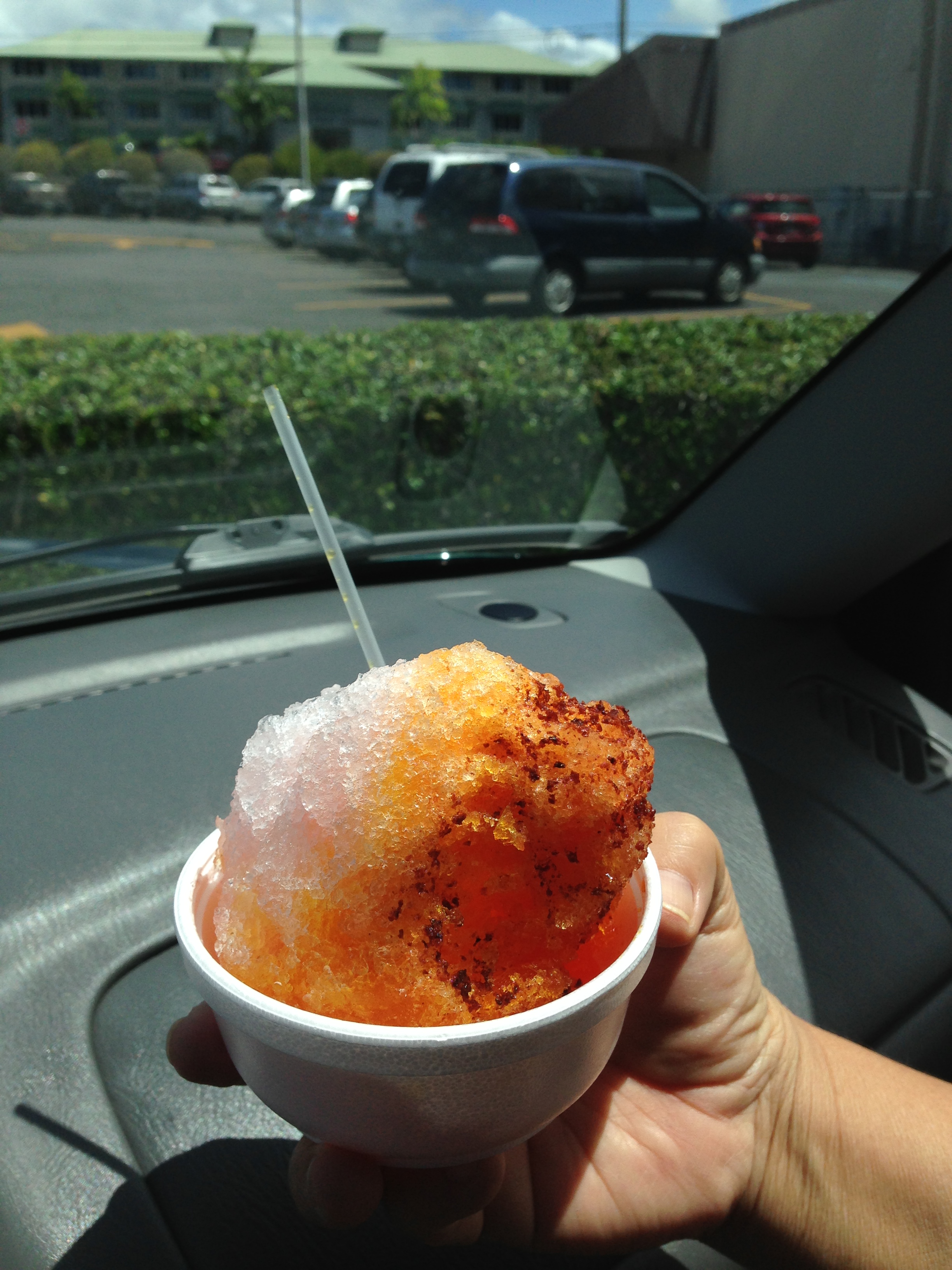 The Portuguese immigrants came to Hawaii from the Azores in the late 19th century, introducing their foods with an emphasis on pork, tomatoes and chili peppers, and built ''forno'', their traditional beehive oven, to make ''pão doce'', the Portuguese sweet bread and ''malasada''. Whalers brought in salted fish, which ultimately became ''lomi-lomi'' salmon. The Japanese brought ''bento'' and ''sashimi'', and, although many of their vegetable seeds would not grow in the climate of the islands, they succeeded in making tofu and soy sauce. The homes of Japanese immigrants lacked ovens, so their cooking relied on frying, steaming, broiling, and simmering, leading to the popularization of tempura and noodle soups in Hawaii.