Coober Pedy () is a town in northern South Australia, north of Adelaide on the Stuart Highway. The town is sometimes referred to as the "opal capital of the world" because of the quantity of precious opals that are mined there. Coober Pedy is renowned for its below-ground residences, called "dugouts", which are built in this fashion due to the scorching daytime heat. The name "Coober Pedy" comes from an Aboriginal term ''kupa-piti'', which means "whitefellas' hole". In the 2016 Census, there were 1,762 people in Coober Pedy.

Aboriginal people have a long-standing connection with the area.

Coober Pedy is a small town about halfway between Adelaide and Alice Springs. It is situated on the edge of the erosional scarp of the Stuart Ranges, on beds of sandstone and siltstone deep and topped with a stony, treeless desert. Very little plant life exists in town due to the region's low rainfall, high cost of water, and lack of topsoil.

The harsh summer desert temperatures mean that many residents prefer to live in caves bored into the hillsides ("dugouts"). A standard three-bedroom cave home with lounge, kitchen, and bathroom can be excavated out of the rock in the hillside for a similar price to building a house on the surface. However, dugouts remain at a constant temperature, while surface buildings need air conditioning, especially during the summer months, when temperatures often exceed . The relative humidity rarely gets over 20% on these hot days, and the skies are usually cloud-free. The average maximum temperature is , but it can get quite cool in the winter. The town's water supply, managed by the District Council which operates a bore and associated treatment plant, comes from the Great Artesian Basin. Problems with ageing pipes, high water losses, and lack of subsidies contribute to consumer water charges being the highest in South Australia.

By 1999, there were more than 250,000 mine shaft entrances in the area and a law discouraged large-scale mining by allowing each prospector a claim. Coober Pedy supplies most of the world's gem-quality opal; it has over 70 opal fields and is the largest opal mining area in the world.

In May 2009, South Australian Premier Mike Rann opened the $1.15 billion Prominent Hill Mine, south east of Coober Pedy. The copper-gold mine is operated by OZ Minerals. In August 2010 Rann opened the Cairn Hill iron ore/copper/gold mine operated by IMX Resources near Coober Pedy. It was the first new iron ore mining area opened in South Australia since the 19th century. Due to low iron ore prices, the Cairn Hill mine was closed in June 2014. It was sold to Cu-River Mining who reopened the mine in 2016.

In 2013, a potentially significant tight oil (oil trapped in oil-bearing shales) resource was found near the outskirts of Coober Pedy in the Arckaringa Basin. This resource was estimated to hold between of oil, providing the potential for Australia to become a net oil exporter.

The town has become a popular stopover point and tourist destination, especially since 1987, when the sealing of the Stuart Highway was completed.

Coober Pedy today relies as much on tourism as the opal mining industry to provide the community with employment and sustainability. Visitors' attractions in Coober Pedy include the mines, the graveyard and the underground churches (the Serbian Orthodox Church and the Catholic Church). There are several motels offering underground accommodation, ranging from a few rooms to the entire motel being a dug-out. The hybrid Coober Pedy Solar Power Station supplies power to the off-grid area.

Coober Pedy is home to the ''Coober Pedy Regional Times'', a free community publication released fortnightly since 15 March 2001. Under a previous name, it had begun as a newsletter called the ''Coober Pedy Times'', which was first issued in August 1982, itself continuing from a publication known as "''Opal Chips''". After some financial difficulties, the ''Times'' was bought by its editor, Margaret McKay, in 2006 and now includes online versions.

The local golf course – mostly played at night with glowing balls, to avoid daytime heat – is completely free of grass, and golfers take a small piece of "turf" around to use for teeing off. As a result of correspondence between the two clubs, the Coober Pedy golf club is the only club in the world to enjoy reciprocal rights at The Royal and Ancient Golf Club of St Andrews. The town also has an Australian rules football club, the Coober Pedy Saints, established in 2004, which competes in the Far North Football League (formerly the Woomera & Districts Football League). Due to the town's isolation, to play matches the Saints must make round trips of over to Roxby Downs, where the rest of the league's teams are located. The town has a drive-in theatre. It opened in 1965, but became less popular after 1980 with the arrival of television to the town, and ceased regular operation in 1984. It was re-opened in 1996.

A rare exhibition cachet, signed by Coober Pedy postmaster Alfred P. North, was discovered in Memphis, Tennessee by philatelist David Saks on 3 February 2016. To date, it is the only known example of this cachet in the world.

Coober Pedy has a hot desert climate (Köppen climate classification ''BWh''). Typical of a desert climate, diurnal ranges are wider than in most places, with an annual average high of and an annual average low of just . Summer temperatures range from in the shade, with occasional dust storms. The annual rainfall in the area is low and amongst the lowest in Australia, at around . Precipitation is well-distributed through the year, although the lowest amounts are recorded in the winter months. Extremes of annual rainfall since 1921 range from in 1929 to in 1973. Coober Pedy was flooded when of rainfall was recorded in 24 hours (which is over three-quarters of the mean annual rainfall) on 10 April 2014. 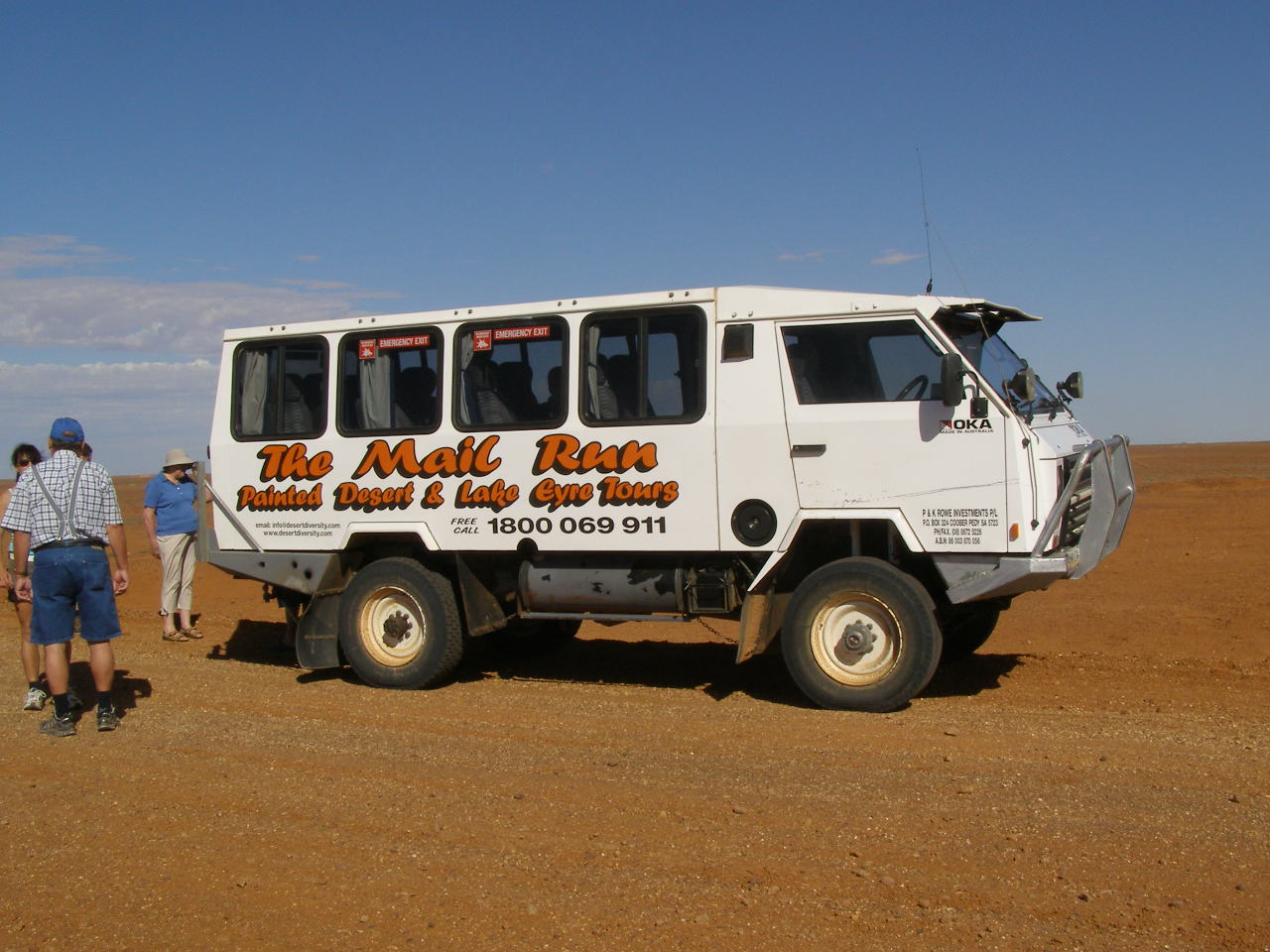 The town is served by daily coach services from Adelaide by Greyhound Australia. The Ghan train serves the town through the Manguri Siding, from Coober Pedy, which is served by trains once weekly in each direction. Passengers on The Ghan are not usually allowed to disembark at Manguri unless they have prearranged transport, due to the siding's isolation and the extremely cold temperatures at night. Coober Pedy is a gateway to the outback communities of Oodnadatta and William Creek, which are both located on the Oodnadatta Track. There is a twice-a-week mail run from Coober Pedy to these communities and other outback homesteads. It carries the mail, general freight and passengers. Regional Express also has direct flights to Adelaide, from Coober Pedy Airport.