The Collective Security Treaty Organization (CSTO; russian: Организация Договора о Коллективной Безопасности, ''Organizatsiya Dogovora o Kollektivnoy Bezopasnosti'', ODKB) is an intergovernmental military alliance in Eurasia that consists of selected post-Soviet states. The treaty had its origins to the Soviet Armed Forces, which was gradually replaced by the United Armed Forces of the Commonwealth of Independent States. However, on 15 May 1992, six post-Soviet states belonging to the Commonwealth of Independent States—Russia, Armenia, Kazakhstan, Kyrgyzstan, Tajikistan, and Uzbekistan—signed the Collective Security Treaty (also referred to as the "Tashkent Pact" or "Tashkent Treaty"). Three other post-Soviet states—Azerbaijan, Belarus, and Georgia—signed the next year and the treaty took effect in 1994. Five years later, six of the nine—all but Azerbaijan, Georgia, and Uzbekistan—agreed to renew the treaty for five more years, and in 2002 those six agreed to create the Collective Security Treaty Organization as a military alliance. Nikolai Bordyuzha was appointed secretary general of the new organization. On 23 June 2006, Uzbekistan became a full participant in the CSTO; and its membership was ratified by the Uzbek parliament on 28 March 2008. It suspended its membership in 2012. The CSTO is an observer organization at the United Nations General Assembly. The CSTO charter reaffirmed the desire of all participating states to abstain from the use or threat of force. Signatories would not be able to join other military alliances or other groups of states, while aggression against one signatory would be perceived as an aggression against all. To this end, the CSTO holds yearly military command exercises for the CSTO nations to have an opportunity to improve inter-organization cooperation. A CSTO military exercise called "Rubezh 2008" was hosted in Armenia, where a combined total of 4,000 troops from all seven constituent CSTO member countries conducted operative, strategic and tactical training with an emphasis towards furthering efficiency of the collective security element of the CSTO partnership. The largest of such exercises was held in Southern Russia and central Asia in 2011, consisting of more than 10,000 troops and 70 combat aircraft. In order to deploy military bases of a third country in the territory of the CSTO member-states, it is necessary to obtain the official consent of all its members. It also employs a "rotating presidency" system in which the country leading the CSTO alternates every year. The CSTO and its member states at times received criticism by independent observers and Western countries for their human rights abuses and political corruption, which they mostly denied.

The CSTO grew out of the framework of the Commonwealth of Independent States, and first began as the CIS Collective Security Treaty (CST) which was signed on 15 May 1992, by Armenia, Kazakhstan, Kyrgyzstan, Russian Federation, Tajikistan and Uzbekistan, in the city of Tashkent. Azerbaijan signed the treaty on 24 September 1993, Georgia on 9 December 1993 and Belarus on 31 December 1993. The treaty came into effect on 20 April 1994. The CST was set to last for a 5-year period unless extended. On 2 April 1999, only six members of the CST signed a protocol renewing the treaty for another five-year period – Azerbaijan, Georgia and Uzbekistan refused to sign and withdrew from the treaty instead. At the same time Uzbekistan joined the GUAM group, established in 1997 by Georgia, Ukraine, Azerbaijan, and Moldova, and largely seen as intending to counter Russian influence in the region. Uzbekistan later withdrew from GUAM in 2005 and joined the CSTO in 2006 in order to seek closer ties with Russia. On 28 June 2012, Uzbekistan suspended its membership in the CSTO. 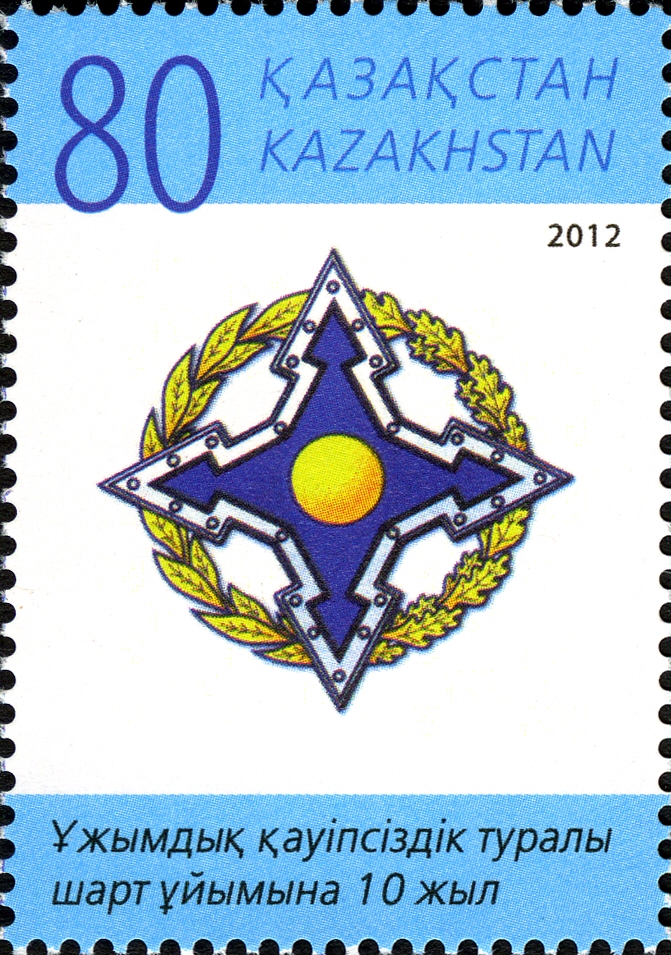 In May 2007, the CSTO secretary-general Nikolai Bordyuzha suggested Iran could join the CSTO saying, "The CSTO is an open organization. If Iran applies in accordance with our charter, we will consider the application" . If Iran joined it would be the first state outside the former Soviet Union to become a member of the organization. The Republic of Serbia and the Islamic Republic of Afghanistan have been accorded observer status in the CSTO.

During 2005, the CSTO partners conducted some common military exercises. In June 2007, Kyrgyzstan assumed the rotating CSTO presidency. In October 2007, the CSTO signed an agreement with the Shanghai Cooperation Organization (SCO), in the Tajik capital of Dushanbe, to broaden cooperation on issues such as security, crime, and drug trafficking. On 6 October 2007, CSTO members agreed to a major expansion of the organization that would create a CSTO peacekeeping force that could deploy under a U.N. mandate or without one in its member states. The expansion would also allow all members to purchase Russian weapons at the same price as Russia. On 29 August 2008, Russia announced it would seek CSTO recognition of the independence of Abkhazia and South Ossetia. Three days earlier, on 26 August, Russia recognized the independence of Georgia's breakaway regions of Abkhazia and South Ossetia. On 5 September 2008, Armenia assumed the rotating CSTO presidency during a CSTO meeting in Moscow, Russia. In 2009, Belarus boycotted the CSTO summit due to their Milk War with Russia. 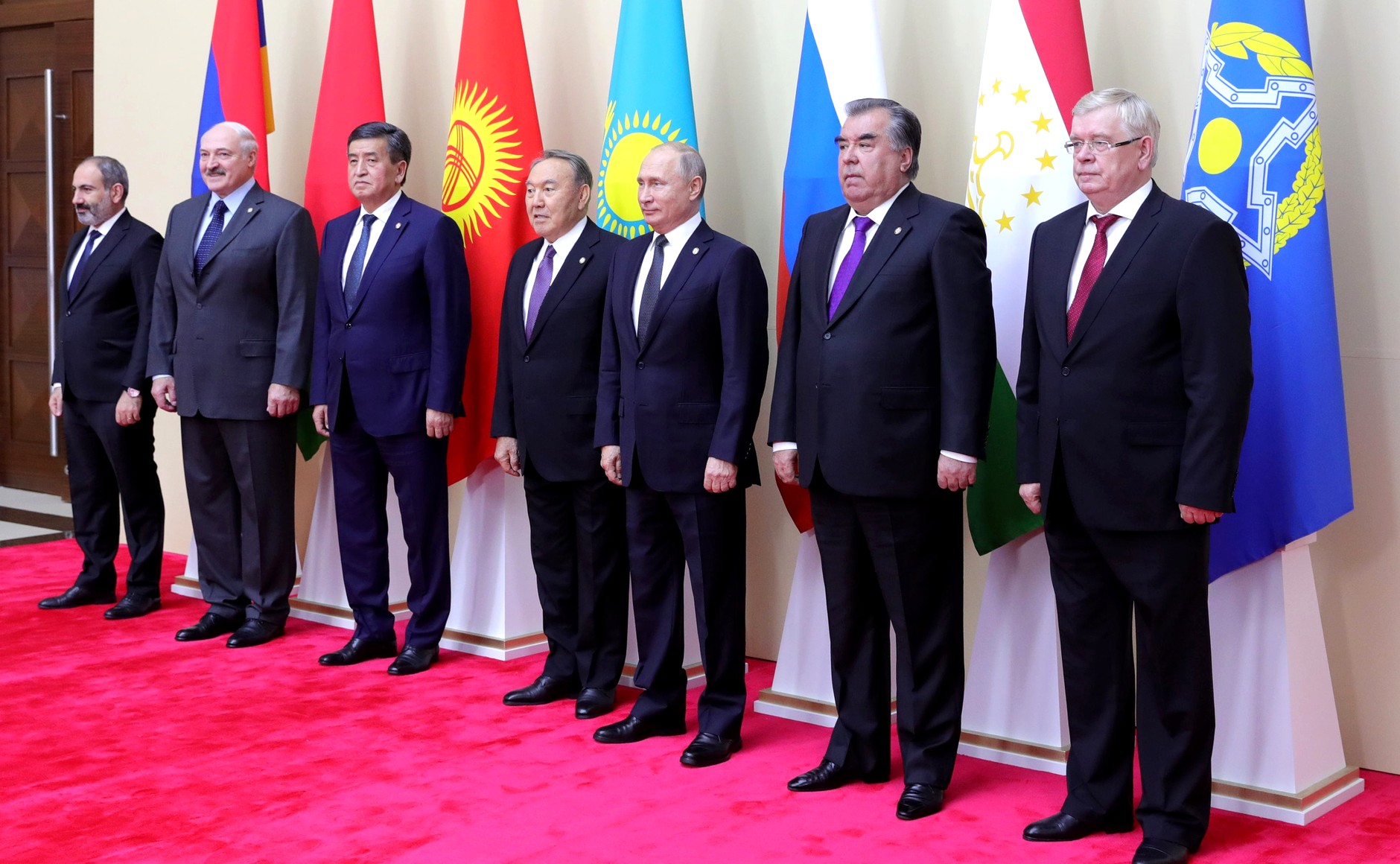 On 10 December 2010, the member states approved a declaration establishing a CSTO peacekeeping force and a declaration of the CSTO member states, in addition to signing a package of joint documents. Since 21 December 2011, the Treaty parties can veto the establishment of new foreign military bases in the member states of the Collective Security Treaty Organization (CSTO). Additionally, Kazakhstan took over the rotating presidency of the CSTO from Belarus. In August 2014, 3,000 soldiers from the members of Armenia, Belarus, Kazakhstan, Kyrgyzstan, Russia and Tajikistan participated in psychological and cyber warfare exercises in Kazakhstan under war games managed by CSTO. On 19 March 2015, the CSTO Secretary General Nikolai Bordyuzha offered to send a peacekeeping mission to Donbass, Ukraine. "The CSTO has a peacekeeping capacity. Our peacekeepers continuously undergo corresponding training. If such a decision is taken by the United Nations, we stand ready to provide peacekeeping units".

On 4 February 2009, an agreement to create the Collective Rapid Reaction Force (KSOR) (Russian: Коллекти́вные си́лы операти́вного реаги́рования (КСОР)) was reached by five of the seven members, with plans finalized on 14 June. The force is intended to be used to repulse military aggression, conduct anti-terrorist operations, fight transnational crime and drug trafficking, and neutralize the effects of natural disasters. Belarus and Uzbekistan initially refrained from signing on to the agreement. Belarus did so because of a trade dispute with Russia, and Uzbekistan due to general concerns. Belarus signed the agreement the following October, while Uzbekistan has never done so. A source in the Russian delegation said Uzbekistan would not participate in the collective force on a permanent basis but would "delegate" its detachments to take part in operations on an ''ad hoc'' basis. On 3 August 2009, the foreign ministry of Uzbekistan criticized plans by Russia to establish a military base in southern Kyrgyzstan for the CSTO rapid reaction force, stating,

After Kurmanbek Bakiyev was ousted from office as President of Kyrgyzstan as a result of riots in Kyrgyzstan in April, 2010, he was granted asylum in Belarus. Belarusian President Alexander Lukashenko expressed doubt about the future of the CSTO for failing to prevent Bakiyev's overthrow, stating, Lukashenko had previously accused Russia of punishing Belarus with economic sanctions after Lukashenko's refusal to recognize the independence of Abkhazia and South Ossetia, stating After refusing to attend a CSTO summit in 2009, Lukashenko said, During a trip to Ukraine to extend Russia's lease of the Crimean port Sevastopol in return for discounted natural gas supplies, Russian President Dmitry Medvedev was asked about whether Belarus could expect a similar deal and responded, The Belarusian President defended himself against this criticism by citing former Russian President Vladimir Putin's invitation of Askar Akayev to Russia after he was ousted as President of Kyrgyzstan during the 2005 Tulip Revolution. The following month, President Medvedev ordered the CEO of Russia's natural gas monopoly Gazprom to cut gas supplies to Belarus. Subsequently, the Russian television channel NTV, run by Gazprom, aired a documentary film which compared Lukashenko to Bakiyev. Then the Russian President's foreign policy adviser Sergei Prikhodko threatened to publish the transcript of a CSTO meeting where Lukashenko said that his administration would recognize Abkhazian and South Ossetian independence. In June 2010, ethnic clashes broke out between ethnic Kyrgyz and Uzbeks in southern Kyrgyzstan, leading interim Kyrgyz President Roza Otunbayeva to request the assistance of Russian troops to quell the disturbances. Kurmanbek Bakiyev denied charges that his supporters were behind the ethnic conflict and called on the CSTO to intervene. Askar Akayev also called for the CSTO to send troops, saying, Russian President Dmitry Medvedev said that "only in the case of a foreign intrusion and an attempt to externally seize power can we state that there is an attack against the CSTO", and that, "all the problems of Kyrgyzstan have internal roots", while CSTO Secretary General Nikolai Bordyuzha called the violence "purely a domestic affair". Later, however, Bordyuzha admitted that the CSTO response may have been inadequate and claimed that "foreign mercenaries" provoked the Kyrgyz violence against ethnic Uzbek minorities. On 21 July 2010, interim Kyrgyz President Roza Otunbayeva called for the introduction of CSTO police units to southern Kyrgyzstan saying, but added Only weeks later the deputy chairman of Otubayeva's interim Kyrgyz government complained that their appeals for help from the CSTO had been ignored. The CSTO was unable to agree on providing military assistance to Kyrgyzstan at a meeting in Yerevan, Armenia, which was attended by Roza Otunbayeva as well as Alexander Lukashenko.