Ciskei (, or ) was a nominally independent state – a Bantustan – in the south east of South Africa. It covered an area of , almost entirely surrounded by what was then the Cape Province, and possessed a small coastline along the shore of the Indian Ocean. Under South Africa's policy of apartheid, land was set aside for black peoples in self-governing territories. Ciskei was designated as one of two homelands or "Bantustans" for Xhosa-speaking people. Ngqika (Rharhabe) Xhosa people were forcibly resettled in the Ciskei, and Gcaleka Xhosa were settled in the Transkei, the other Xhosa homeland. Unlike the other Bantustans, including Transkei, which saw itself as a Xhosa homeland, Ciskei has been described as having "absolutely no basis in any ethnic, cultural or linguistic fact whatsoever" despite efforts by the Ciskei authorities to create a distinctive "Ciskeian" identity. In contrast to the Transkei, which was largely contiguous and deeply rural, and governed by hereditary chiefs, the area that became the Ciskei had been made up of a patchwork of "reserves" interspersed with pockets of white-owned farms. There were elected headmen, it had a relatively educated working class populace and there was a tendency of the region's black residents, who often worked in East London, Queenstown and King Williams Town, to oppose traditional methods of control. These differences have been posited as the reason for two separate homelands for the Xhosa people being developed, as well as the later nominal independence of Ciskei from South Africa, than Transkei. After its creation, large numbers of blacks were expelled from designed white areas in the Cape Province by the Apartheid government to Ciskei, in particular, "non-productive Bantus"-women with dependent children, the elderly, and the infirm, and it was also treated as a reservoir of cheap black labour. The diaspora of the Ciskei Xhosa is due to the settler colonialism and internal wars between the Xhosa. Ciskei had a succession of capitals during its existence. Originally, Zwelitsha served as the capital with the view that Alice would become the long-term national capital. However, it was Bisho (now spelled ''Bhisho'') that became the capital until Ciskei's reintegration into South Africa. The name Ciskei means ''"on this side of the Kei River"'', and is in contrast to the nearby Bantustan of Transkei. 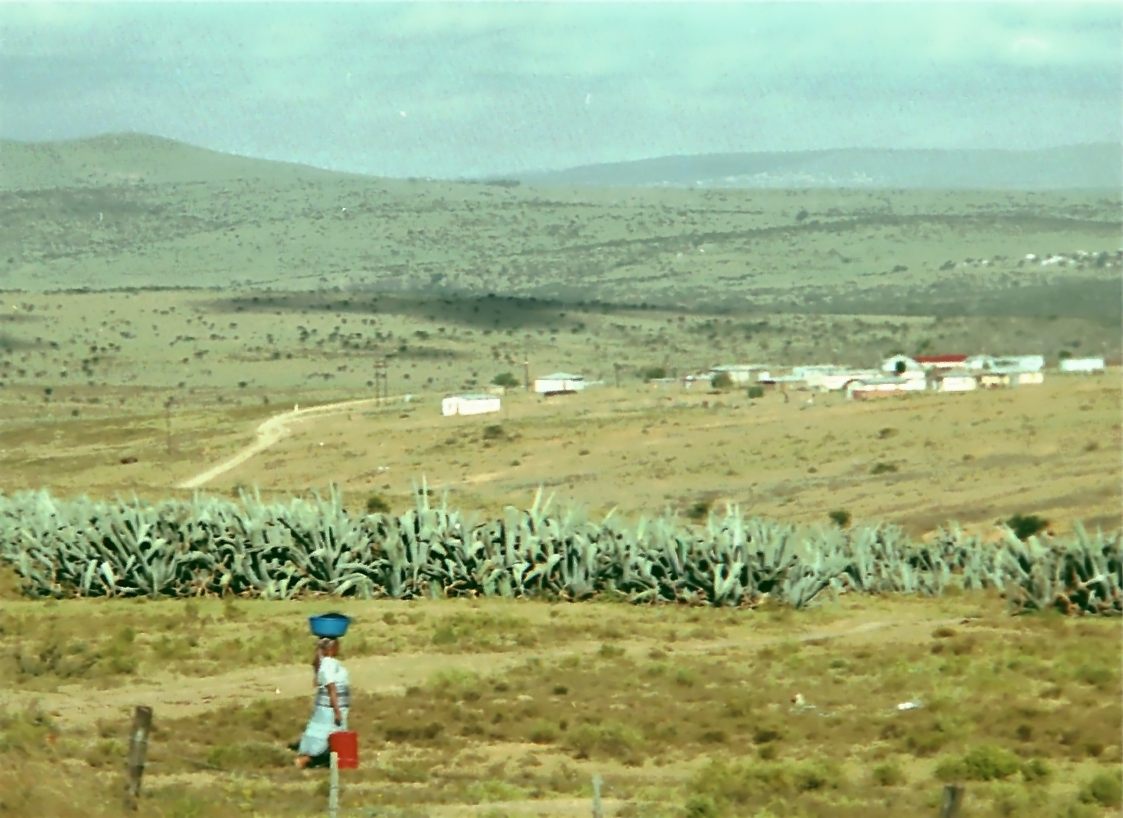 By the time Sir John Cradock was appointed governor of the Cape Colony in 1811, the Zuurveld region had lapsed into disorder and many white farmers had begun to abandon their farms. Early during 1812, on the instructions of the governor, Lieutenant-Colonel John Graham forced 20,000 Xhosa to cross the Fish River. Subsequently, 27 military posts were erected across this border, which resulted in the establishment of the garrison towns of Grahamstown and Cradock. At the end of the 19th century, the area known as British Kaffraria between the Fish and Kei rivers had been set aside for the "Bantu" and was from then on known as the Ciskei. Europeans gave the name ''Ciskei'' to the area to distinguish it from the ''Transkei'', the area north of the Kei. After the Union of South Africa formed in 1910, the "Bantu" rights of occupation remained unclear and differed from colony to colony within South Africa. The Native Lands Act of 1913 demarcated the reserves in the Union, and made it illegal to sell or lease these lands to Europeans (except in the Cape Colony). General Hertzog pursued his segregation policy and subsequently passed the Native Trust and Land Act in 1936. This act effectively abolished the right of the Cape "Bantu" to buy land outside of the existing reserves. The boundaries of the Ciskei region changed as land was added, and excised. A notable excision was the removal of the Glen Grey and Herschel Districts, and their allocation to the newly independent Transkei, with the populations of the districts moving into the rest of Ciskei to retain their South African citizenship (which was subsequently lost when Ciskei became independent). By the 1970s, the South African government decided on the final boundaries of Ciskei, as a consolidated area, through the amalgamation of existing reserves allocated to Ciskei, and the purchase of intervening white-owned land. This amalgamation reduced the total length of the Ciskei's borders, making them easier for the South African government to police, as well being an attempt to create a more viable area for the homeland.

In 1961 Ciskei became a separate administrative region and in 1972 was declared self-governing under the rule of Chief Justice Mabandla and then Lennox Sebe. Mabandla was a Fengu, a group that had allied itself with the British in the frontier wars, and which historically embraced colonial education and were better educated. The Rharhabe were resentful, and with the policy of "retribalisation" by the apartheid authorities, asserted their position, which culminated in the election of Sebe, although Sebe later abandoned his anti-Fengu rhetoric. In 1978 it became a single-party state under the rule of Sebe, and after an independence referendum in 1980, in 1981 it became the fourth homeland to be declared independent by the South African government and its residents lost their South African citizenship. However, there were no border controls between South Africa and Ciskei. Black people found to be living without permits in white areas or farms in South Africa, often for generations, were forcibly relocated to Ciskei by Apartheid authorities, often from "black spots" in the neighbouring "white corridor" and moved into squalid resettlement camps. A 1983 study by Rhodes University found that 40% of the children in one camp suffered from wasting caused by malnutrition, and 10% suffered from kwashiorkor, and in another camp, at Thornhill, 50% of children died before the age of 5. Typhoid epidemics also broke out in the resettlement camps, which were often isolated, and lacked health facilities, sanitation and schools, and were far from urban areas. The forced relocations of blacks to the Ciskei resulted in high population densities in the homeland, a situation that persists to the present day. On several occasions, the Ciskei government imposed collective punishment on communities that opposed its rule, and people fled the Bantustan back into South Africa proper because of the harassment and denial of government services to dissenters. In common with other Bantustans its independence was not recognised by the international community. Sebe once claimed that the State of Israel had granted official recognition to Ciskei, but the Israeli Foreign Ministry denied this.

In 1986 and 1987, Transkei, a larger, wealthier and more populous entity, undertook a series of military raids on Ciskei and attempted to seize control of Ciskei. One of these raids was an attack on leader Lennox Sebe's compound, with the apparent goal of taking him hostage, in order to force a merger of the two Bantustans. Transkei had previously granted sanctuary to Lennox Sebe's estranged brother Charles, the former head of Ciskei's security forces, who had been imprisoned in Ciskei on charges of sedition, and kidnapped Lennox Sebe's son The South African government ostensibly intervened to warn the Transkei government off however, it later emerged at the Truth and Reconciliation Commission that the plan to amalgamate the Transkei and Ciskei into a proposed ''Xhosaland'', as well as the freeing of Charles Sebe from prison, had been carried out by South African security forces linked to the Civil Cooperation Bureau, in order to consolidate an anti-ANC front in the Eastern Cape region, as part of the abortive ''Operation Katzen''.

In 1990 Brigadier Oupa Gqozo deposed Sebe and ruled as a dictator – despite an initial promise of a swift return to civilian rule. During 1991 and 1992 many of the legal foundations of apartheid in South Africa were removed, undermining the rationale for the homelands' continued existence. The African National Congress pressed strongly for them to be reincorporated into South Africa. This was opposed by Gqozo and the other homeland leaders.

On 7 September 1992 the Ciskei Defence Force fired into a crowd (led by Ronnie Kasrils, Cyril Ramaphosa and Chris Hani) of ANC members demanding the removal of Gqozo. 28 people were killed and hundreds injured in the Bisho massacre outside the sports stadium in Bisho, the small capital of Ciskei.

Gqozo refused to participate in the negotiations to agree a post-apartheid constitution for South Africa and initially threatened to boycott the first non-racial elections. This became unsustainable, and in March 1994 Ciskei government workers went on strike for fear of losing their job security and pensions in the post-apartheid era. The police then mutinied, prompting Gqozo to resign on 22 March. The Transitional Executive Council (TEC) appointed two administrators, who took control of the homeland to ensure security until the elections could be held the following month. The TEC also blocked the South African government from deploying the paramilitary Internal Stability Unit (ISU) of the South African Police force, as the unit was suspected of fomenting violence in other parts of the country, and after the Ciskei military had threatened to open fire on the ISU if it entered the territory. Ciskei and all of the other homelands were reincorporated into South Africa on 27 April 1994, after the first post-apartheid elections. Along with Transkei, Ciskei became part of the new Eastern Cape Province, with its capital becoming the capital of the new province, and the former territory of the Ciskei forming parts of the Buffalo City Metropolitan Municipality, the Chris Hani District Municipality and the Amathole District Municipality, as of 2016.

Creation of tribalism in Ciskei