The ''Chicago Tribune'' is a daily newspaper based in Chicago, Illinois, United States, owned by Tribune Publishing. Founded in 1847, and formerly self-styled as the "World's Greatest Newspaper" (a slogan for which WGN radio and television are named), it remains the most-read daily newspaper of the Chicago metropolitan area and the Great Lakes region. It had the 6th highest circulation for American newspapers in 2017. In the 1850s, under Joseph Medill, the ''Chicago Tribune'' became closely associated with Illinois' favorite son, Abraham Lincoln, and with the Republican Party's progressive wing. In the 20th century under Medill's grandson, Robert R. McCormick, it achieved a reputation as a crusading paper with a decidedly more American-conservative anti-New Deal outlook, and its writing reached other markets through family and corporate relationships at the ''New York Daily News'' and the ''Washington Times-Herald.'' The 1960s saw its corporate parent owner, Tribune Company, reach into new markets. In 2008, for the first time in its over century-and-a-half history, its editorial page endorsed a Democrat, Illinoisan Barack Obama, for U.S. president. Originally published solely as a broadsheet, on January 13, 2009, the ''Tribune'' announced it would continue publishing as a broadsheet for home delivery, but would publish in tabloid format for newsstand, news box, and commuter station sales. This change, however, proved to be unpopular with readers and in August 2011, the ''Tribune'' discontinued the tabloid edition, returning to its established broadsheet format through all distribution channels. In December 2019, Alden Global Capital, a New York City-based hedge fund, acquired a 32% stake in shares of Tribune Publishing Company. The ''Tribune''s masthead displays the American flag, in reference to the paper's former motto, "An American Paper for Americans". The motto is no longer displayed on the masthead, where it was placed below the flag.

The ''Tribune'' was founded by James Kelly, John E. Wheeler, and Joseph K. C. Forrest, publishing the first edition on June 10, 1847. Numerous changes in ownership and editorship took place over the next eight years. Initially, the ''Tribune'' was not politically affiliated, but tended to support either the Whig or Free Soil parties against the Democrats in elections. By late 1853, it was frequently running xenophobic editorials that criticized foreigners and Roman Catholics. About this time it also became a strong proponent of temperance. However nativist its editorials may have been, it was not until February 10, 1855, that the ''Tribune'' formally affiliated itself with the nativist American or Know Nothing party, whose candidate Levi Boone was elected Mayor of Chicago the following month. 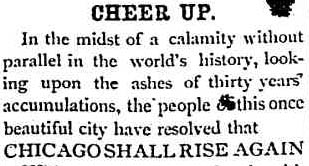 By about 1854, part-owner Capt. J. D. Webster, later General Webster and chief of staff at the Battle of Shiloh, and Dr. Charles H. Ray of Galena, Illinois, through Horace Greeley, convinced Joseph Medill of Cleveland's ''Leader'' to become managing editor. Ray became editor-in-chief, Medill became the managing editor, and Alfred Cowles, Sr., brother of Edwin Cowles, initially was the bookkeeper. Each purchased one third of the ''Tribune''. Under their leadership, the ''Tribune'' distanced itself from the Know Nothings, and became the main Chicago organ of the Republican Party. However, the paper continued to print anti-Catholic and anti-Irish editorials, in the wake of the massive Famine immigration from Ireland. The ''Tribune'' absorbed three other Chicago publications under the new editors: the ''Free West'' in 1855, the ''Democratic Press'' of William Bross in 1858, and the ''Chicago Democrat'' in 1861, whose editor, John Wentworth, left his position when elected as Mayor of Chicago. Between 1858 and 1860, the paper was known as the ''Chicago Press & Tribune''. On October 25, 1860, it became the ''Chicago Daily Tribune''. Before and during the American Civil War, the new editors strongly supported Abraham Lincoln, whom Medill helped secure the presidency in 1860, and pushed an abolitionist agenda. The paper remained a force in Republican politics for years afterwards. In 1861, the ''Tribune'' published new lyrics by William W. Patton for the song "John Brown's Body". These rivaled the lyrics published two months later by Julia Ward Howe. Medill served as mayor of Chicago for one term after the Great Chicago Fire of 1871.

Under the 20th-century editorship of Colonel Robert R. McCormick, who took control in the 1920s, the paper was strongly isolationist and aligned with the Old Right in its coverage of political news and social trends. It used the motto "The American Paper for Americans". From the 1930s to the 1950s, it excoriated the Democrats and the New Deal of Franklin D. Roosevelt, was resolutely disdainful of the British and French, and greatly enthusiastic for Chiang Kai-shek and Sen. Joseph McCarthy. When McCormick assumed the position of co-editor (with his cousin Joseph Medill Patterson) in 1910, the ''Tribune'' was the third-best-selling paper among Chicago's eight dailies, with a circulation of only 188,000. The young cousins added features such as advice columns and homegrown comic strips such as ''Little Orphan Annie'' and ''Moon Mullins''. They promoted political "crusades", with their first success coming with the ouster of the Republican political boss of Illinois, Sen. William Lorimer. At the same time, the ''Tribune'' competed with the Hearst paper, the ''Chicago Examiner'', in a circulation war. By 1914, the cousins succeeded in forcing out Managing Editor William Keeley. By 1918, the ''Examiner'' was forced to merge with the ''Chicago Herald''. In 1919, Patterson left the ''Tribune'' and moved to New York to launch his own newspaper, the New York ''Daily News''. In a renewed circulation war with Hearst's ''Herald-Examiner'', McCormick and Hearst ran rival lotteries in 1922. The ''Tribune'' won the battle, adding 250,000 readers to its ranks. Also in 1922, the ''Chicago Tribune'' hosted an international design competition for its new headquarters, the Tribune Tower. The competition worked brilliantly as a publicity stunt, and more than 260 entries were received. The winner was a neo-Gothic design by New York architects John Mead Howells and Raymond Hood. The newspaper sponsored a pioneering attempt at Arctic aviation in 1929, an attempted round-trip to Europe across Greenland and Iceland in a Sikorsky amphibious aircraft. But, the aircraft was destroyed by ice on July 15, 1929, near Ungava Bay at the tip of Labrador, Canada. The crew were rescued by the Canadian science ship CSS ''Acadia''. The ''Tribune''s reputation for innovation extended to radio—it bought an early station, WDAP, in 1924 and renamed it WGN (AM), the station call letters standing for the paper's self-description as the "World's Greatest Newspaper." WGN Television was launched April 5, 1948. These broadcast stations remained ''Tribune'' properties for nine decades and were among the oldest newspaper/broadcasting cross-ownerships in the country. (The ''Tribune''s East Coast sibling, the New York ''Daily News'', later established WPIX television and radio.) The ''Tribune''s legendary sports editor Arch Ward created the Major League Baseball All-Star Game in 1933 as part of the city's Century of Progress exposition. From 1940 to 1943, the paper supplemented its comic strip offerings with ''The Chicago Tribune Comic Book'', responding to the new success of comic books. At the same time, it launched the more successful and longer lasting ''The Spirit Section'', which was also an attempt by newspapers to compete with the new medium. Under McCormick's stewardship, the ''Tribune'' was a champion of modified spelling for simplicity (such as spelling "although" as "altho"). McCormick, a vigorous campaigner for the Republican Party, died in 1955, just four days before Democratic boss Richard J. Daley was elected mayor for the first time. One of the great scoops in ''Tribune'' history came when it obtained the text of the Treaty of Versailles in June 1919. Another was its revelation of United States war plans on the eve of the Pearl Harbor attack. The ''Tribune''s June 7, 1942, front page announcement that the United States had broken Japan's naval code was the revelation by the paper of a closely guarded military secret. The story revealing that Americans broke the enemy naval codes was not cleared by censors, and had U.S. President Franklin D. Roosevelt so enraged that he considered shutting down the ''Tribune''.

The paper is well known for a mistake it made during the 1948 presidential election. At that time, much of its composing room staff was on strike. The early returns led editors to believe (along with many in the country) that the Republican candidate Thomas Dewey would win. An early edition of the next day's paper carried the headline "Dewey Defeats Truman", turning the paper into a collector's item. Democrat Harry S. Truman won and proudly brandished the newspaper in a famous picture taken at St. Louis Union Station. Beneath the headline was a false article, written by Arthur Sears Henning, which purported to describe West Coast results although written before East Coast election returns were available.

Colonel McCormick prevented the ''Tribune'' for years from participating in the Pulitzer Prize competition. But it has won 25 of the awards over the years, including many for editorial writing. The ''Tribune'' won its first post-McCormick Pulitzer in 1961, when Carey Orr won the award for editorial cartooning. Reporter George Bliss won a Pulitzer the following year for reporting, and reporter Bill Jones another in 1971 for reporting. A reporting team won the award in 1973, followed by reporter William Mullen and photographer Ovie Carter, who won a Pulitzer for international reporting in 1975. A local reporting team won the award in 1976, and architecture critic Paul Gapp won a Pulitzer in 1979.

In 1969, under the leadership of publisher Harold Grumhaus and editor Clayton Kirkpatrick (1915–2004), the ''Tribune'' began reporting from a wider viewpoint. The paper retained its Republican and conservative perspective in its editorials, but it began to publish perspectives in wider commentary that represented a spectrum of diverse opinions, while its news reporting no longer had the conservative slant it had in the McCormick years. On May 1, 1974, in a major feat of journalism, the ''Tribune'' published the complete 246,000-word text of the Watergate tapes, in a 44-page supplement that hit the streets 24 hours after the transcripts' release by the Nixon White House. Not only was the ''Tribune'' the first newspaper to publish the transcripts, but it beat the U.S. Government Printing Office's published version, and made headlines doing so. A week later, after studying the transcripts, the paper's editorial board observed that "the high dedication to grand principles that Americans have a right to expect from a President is missing from the transcript record." The ''Tribune''s editors concluded that "nobody of sound mind can read