The Chicago Bulls are an American professional basketball team based in Chicago. The Bulls compete in the National Basketball Association (NBA) as a member of the league's Eastern Conference Central Division. The team was founded on January 16, 1966, and played its first game during the 1966–67 NBA season. The Bulls play their home games at the United Center, an arena on Chicago's West Side shared with the Chicago Blackhawks of the National Hockey League (NHL). The Bulls saw their greatest success during the 1990s when they played a major part in popularizing the NBA worldwide. They are known for having one of the NBA's greatest dynasties, winning six NBA championships between 1991 and 1998 with two three-peats. All six of their championship teams were led by Hall of Famers Michael Jordan, Scottie Pippen, and coach Phil Jackson. The Bulls are the only NBA franchise to win multiple championships while never losing an NBA Finals series in their history. The Bulls won 72 games during the 1995–96 NBA season, setting an NBA record that stood until the Golden State Warriors won 73 games during the 2015–16 NBA season. The Bulls were the first team in NBA history to win 70 games or more in a single season, and the only NBA franchise to do so until the 2015–16 Warriors. Since 1998, the Bulls have failed to regain their former success. The franchise struggled throughout the 2000s, but showed promise in the early 2010s, lead by Derrick Rose and Joakim Noah, culminating in a 62-win season in 2010–11. However, due to injuries and departures for key players, the franchise was never able to build on that success and has sunk back into mediocrity since. Michael Jordan and Derrick Rose have both won the NBA Most Valuable Player Award while playing for the Bulls, for a total of six MVP awards. The Bulls share rivalries with the Cleveland Cavaliers, Detroit Pistons, Miami Heat and the New York Knicks. The Bulls' rivalry with the Pistons was highlighted heavily during the late 1980s and early 1990s.

On January 16, 1966, Chicago was granted an NBA franchise to be called the Bulls. The Chicago Bulls became the third NBA franchise in the city, after the Chicago Stags (1946–1950) and the Chicago Packers/Zephyrs (1961–1963, now the Washington Wizards). The Bulls' founder, Dick Klein, was the Bulls' only owner to ever play professional basketball (for the Chicago American Gears). He served as the Bulls' president and general manager in their initial years. After the 1966 NBA Expansion Draft, the newly founded Chicago Bulls were allowed to acquire players from the previously established teams in the league for the upcoming 1966–67 season. The team started during the 1966–67 NBA season, and posted a 33–48 record, the best by an expansion team in NBA history. Coached by Chicagoan and former NBA star Johnny "Red" Kerr, and led by former NBA assist leader Guy Rodgers, guard Jerry Sloan and forward Bob Boozer, the Bulls qualified for the playoffs, the only NBA team to do so in their inaugural season. 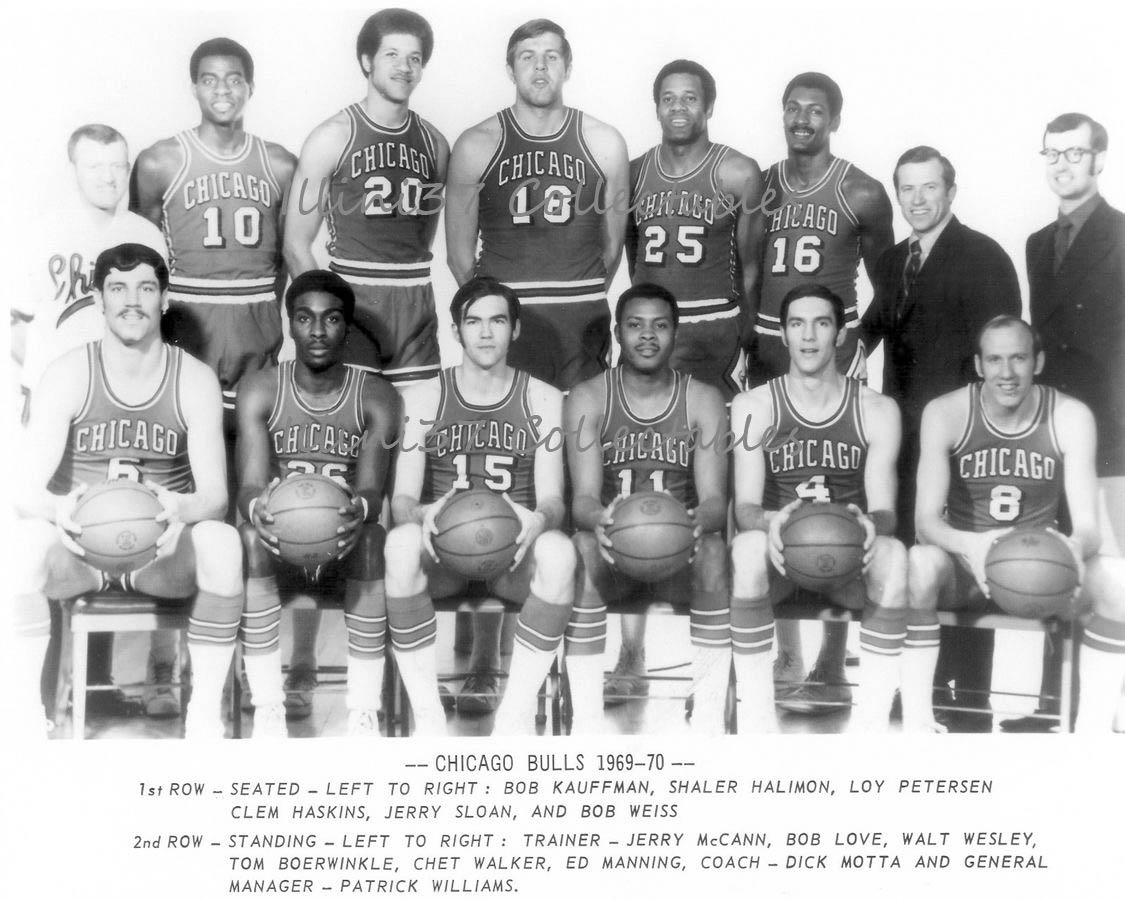 In their first season, the Bulls played their home games at the International Amphitheatre, before moving to Chicago Stadium. Fan interest was diminishing after four seasons, with one game in the 1968 season having an official attendance of 891 and some games being played in Kansas City. In 1969, Klein dropped out of the general manager job and hired Pat Williams, who as the Philadelphia 76ers' business manager created promotions that helped the team become third in attendance the previous season. Williams revamped the team roster, acquiring Chet Walker from his old team in exchange for Jim Washington and drafting Norm Van Lier – who was traded to the Cincinnati Royals and only joined the Bulls in 1971 – while also investing in promotion, with actions such as creating mascot Benny the Bull. The Bulls under Williams and head coach Dick Motta qualified for four straight playoffs and had attendances grow to over 10,000. In 1972, the Bulls set a franchise win–loss record at 57 wins and 25 losses. During the 1970s, the Bulls relied on Jerry Sloan, forwards Bob Love and Chet Walker, point guard Norm Van Lier, and centers Clifford Ray and Tom Boerwinkle. The team made the conference finals in 1975 but lost to the eventual champions, the Golden State Warriors, 4 games to 3. After four 50-win seasons, Williams returned to Philadelphia, and Motta decided to take on the role of GM as well. The Bulls ended up declining, winning only 24 games in the 1975–76 season. Motta was fired and replaced by Ed Badger.