The first Malibu was a top-line subseries of the mid-sized Chevrolet Chevelle from 1964 to 1972. Malibus were generally available in a full range of bodystyles including a four-door sedan, two-door Sport Coupe hardtop, convertible and two-seat station wagon. Interiors were more lavish than lesser Chevelle 300 and 300 Deluxe models thanks to patterned cloth and vinyl upholstery (all-vinyl in convertibles and station wagons), deep-twist carpeting, deluxe steering wheel and other items. The Malibu SS was available only as a two-door Sport Coupe hardtop or convertible and added bucket seats, center console (with optional four-speed manual or Powerglide transmissions), engine gauges and special wheelcovers, and offered with any six-cylinder or V8 engine offered in other Chevelles - with the top option being a in 1964. For 1965, Malibus and other Chevelles received new grilles and revised tail sections and had the exhaust pipes replaced but carried over the same basic styling and bodystyles from 1964. The Malibu and Malibu SS models continued as before with the SS featuring a blacked-out grille and special wheelcovers. Top engine option was now a V8. The Malibu SS was replaced in 1966 by a new Chevelle SS-396 series that included a big-block V8 engine (Canadian market did not receive the SS396 but marketed the former Malibu SS nameplate until January 1967 when it was phased out), heavy duty suspension and other performance equipment. Other SS-396 equipment was similar to Malibu Sport Coupes and convertibles including an all-vinyl bench seat. Bucket seats and console with floor shift were now optional on the SS and for 1966 with the SS now denoting a car with a big-block engine, the bucket seats became a new option on the regular Malibu Sport Coupe and convertible, upon which any six-cylinder or small-block V8 could be ordered. Also new for 1966 was the Chevelle Malibu four-door Sport Sedan hardtop. Styling revisions on all 1966 Chevelles including more rounded styling similar to the full-sized Chevrolets with sail panels and tunneled rear windows featured on two-door hardtop coupes. For 1967, the same assortment of bodystyles were continued with styling changes similar to all other Chevelles including a new grille and revised tail section with taillights that wrapped around to the side. New this year was a Chevelle Malibu Concours station wagon with simulated woodgrain exterior side panel trim. Front disc brakes were a new option along with a stereo 8-track tape player. The same assortment of drivetrains carried over from 1966 with the top V8 dropped from .

Malibus and all other Chevelles were completely restyled for 1968 with semi-fastback rooflines on two-door hardtops and wheelbases split to } on two-door models and 116 for four-door sedans and station wagons. Engine offerings included a new V8 rated at that replaced the V8 that had served as the base V8 since the Chevelle's introduction in 1964. Inside was a new instrument panel featuring round gauges in square pods similar to what would appear in Camaros the following year. New for 1968 was the Concours luxury option for Malibu sedans and coupes that included upgraded cloth or vinyl bench seats, carpeted lower door panels, woodgrain trim on dash and door panels, a center console and floor shifter (only with the hardtop and convertible, which was shared with the SS396) and Concours nameplates. There was again a top-line Concours Estate wagon with simulated woodgrain trim that had the same interior and exterior appointments as the Malibu sedans. 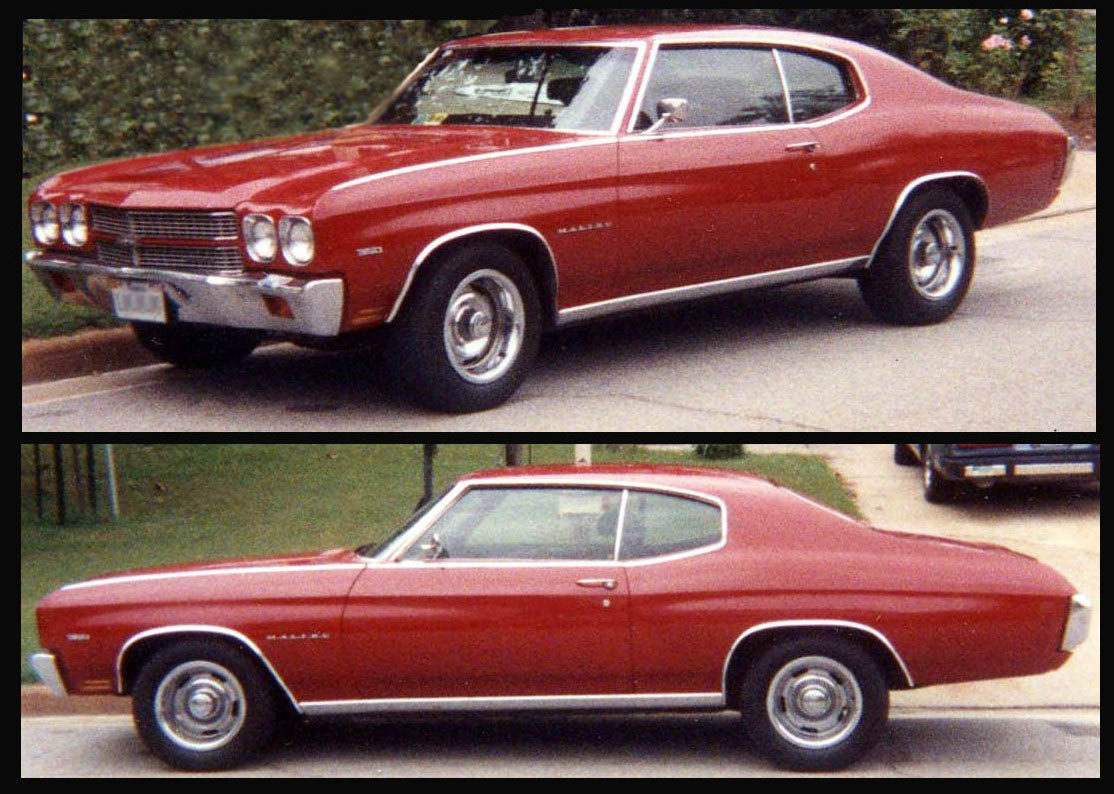 New grilles and rear decks with revised taillights highlighted the 1969 Malibus and other Chevelles. Instrument panels were revised and front seat headrests were now standard equipment due to federal safety mandate. The ignition switch moved from the instrument panel to the steering column and also doubled as a steering wheel lock. The 307 continued as the base V8, but the 327 engines were replaced by new V8s of . GM's three-speed Turbo Hydra-Matic transmission, previously only offered on SS-396 Chevelles (RPO M40), was now available on all models with all engines (THM400s were used with the 396 while the THM350 (RPO M38) first introduced with the Camaro and Nova) was phased in with the small blocks optioned, including the six-cylinder and small-block V8s which in previous years were only available with the two-speed Powerglide. A police package Chevelle 300 (pillared 4 door sedan) was available for the 1969 model year which came with the L35 code 396 - it was built in few numbers when the Chrysler Corporation held the market for its law enforcement orders. Some 1964 and 1965 Chevelle 300s came with the BO7 police package but was powered with the inline six. For 1970, the Malibu was initially the only series of Chevelle offered, aside from the SS-396 and new SS-454, as the low-line 300 and 300 Deluxe models were discontinued for the American market (it continued in Canada until 1972), which also eliminated the two-door pillared coupes from the Chevelle lineup – which were never included in the Malibu series. New grilles, rear decks with taillights moved into the bumper and revised Sport Coupe roofline highlighted this year's changes. The standard six-cylinder engine was punched up from to and , while the same assortment of V8s carried over with the addition of a , V8 on non-SS Chevelles. At mid-year, the Malibu was rejoined by lower-line Chevelle models that were simply called the base Chevelle in both four-door sedans and two-door hardtops. In 1971, Malibus and all other Chevelles got a new grille surrounded by single headlamps replacing the duals of previous years, and four round taillights similar to Camaros and Corvettes were located in the bumper. All engines were detuned to use lower-octane unleaded gasoline this year per GM corporate policy as a first step toward the catalytic converter-equipped cars planned for 1975 and later models which would require no-lead fuel. Only new grilles highlighted the 1972 Malibu and other Chevelles. All bodystyles were carried over from 1971, but 1972 would be the final year for hardtops and convertibles as the redesigned Chevelles originally planned for this year, but delayed until 1973, would feature Colonnade styling with side pillars and frameless door windows. The 1972 Chevelle was also ordered with the police package which used RPO 9C1 (which became the default SEO (service option) code for subsequent Chevrolet PPV packages).

The Chevelle was redesigned for the 1973 model year. Models included the base Deluxe, mid-range Malibu & Malibu SS and the top-line Laguna. For 1974, the Deluxe was dropped, and the Malibu became the entry-level Chevelle. The Laguna trim package was replaced with the Malibu Classic which used a stacked arrangement of four rectangular headlights and made its way to the dealers in the 1976 model year, offering the Chevrolet built inline six 250 CID as the base engine. The Laguna S-3 model was introduced to replace the SS, and continued through 1976.

For the 1978 model year, the Malibu name, which had been the bestselling badge in the lineup, replaced the Chevelle name. This was Chevrolet's second downsized nameplate, following the lead of the 1977 Chevrolet Caprice. The new, more efficient platform was over a foot shorter and had shed compared to previous versions, yet offered increased trunk space, leg room, and head room. Only two trim levels were offered - Malibu and Malibu Classic. The Malibu Classic Landau series had a two-tone paint job on the upper and lower body sections, and a vinyl top. This generation introduced the Chevrolet 90° V6 family of engines, with the 200 CID (3.3 L) V6 as the base engine for the all new 1978 Chevrolet Malibu, along with the 229 CID (3.8 L) V6 and the 305 CID (5.0 L) Chevy built V8 as options. The 200 and 229 engines were essentially a small block V-8, with one pair of cylinders lopped off. The front and rear bellhousing face were the same as the small V8. The 231 engine was a Buick product, and featured a front distributor. Three bodystyles were produced (station wagon, sedan, and coupe), and the design was also used as the basis for the El Camino pickup truck with its own chassis. The sedan initially had a conservative six-window notchback roofline. This was in contrast to the unusual fastback rooflines adopted by Oldsmobile and Buick divisions which would later revert a more formal pillar style. To increase rear seat hip room (and encourage more orders for the high-profit air conditioner), the windows in the rear doors of four-door sedans were fixed, while the wagons had small moveable vents. With the rear window regulators no longer required, Chevrolet was able to recess the door arm rests into the door cavity, resulting in a few extra inches of rear seat room. Customers complained about the lack of rear seat ventilation. No doubt this design contributed to the number of factory air conditioning units sold with the cars, to the benefit of General Motors and Chevrolet dealers. For the 1981 model year, sedans adopted a four-window profile and "formal" pillared upright roofline. The two-door coupe was last produced in this year, as the Monte Carlo assumed the market position held by the 2-door coupe. For 1982 the Malibu was facelifted with more squared-off front styling marked by quad headlights with long, thin turn signals beneath them. The look was very reminiscent of the also recently facelifted Chevrolet Caprice. For 1983, Malibus gained a block-style "Malibu" badge on the front fenders to replace the cursive-style script located on the rear quarter panels of previous model years. The four-door Malibu was commonly used in fleet service, especially for law enforcement. After the Chevrolet Nova ceased production in 1979, the mid-sized 9C1 police version (not to be confused with the full-size Chevrolet Impala 9C1 which was also available) was transferred to the Malibu, filling a void for the mid-sized police patrol cars. A 9C1-equipped Malibu with an LT-1 Z-28 Camaro engine driven by E. Pierce Marshall placed 13th of 47 in the 1979 Cannonball Baker Sea-To-Shining-Sea Memorial Trophy Dash, better known as the Cannonball Run. There was no factory Malibu SS option available on this generation. The SS only came in the El Camino. The rare, and striking, 1980 Malibu M80 was a dealer package for only North and South Carolina. It was mostly aimed at NASCAR fans who regularly traveled to Darlington Raceway. To this day, the number actually produced is unknown; estimates place this around 1,901 cars. All M80s had to be white with dark blue bucket seats and center console interior. The base of the M80 was a two-door sport coupe equipped with the F41 Sport Suspension package and the normal V8 (140 hp) drive train. The M80 option added two dark blue skunk stripes on top and a lower door stripe with the M80 identification. The package also added front and rear spoilers and 1981 steel rally wheels (sourced from the 1980 Monte Carlo). In Mexico, General Motors produced this generation in the Ramos Arizpe plant, which was sold during three years (1979 to 1981). Mexican versions came in three trim levels (Chevelle, Malibu and Malibu Classic) and two body styles (sedan and coupe) with the I6 as basic engine and the V8 as the optional; this engine was standard on Malibu Classic models during those three years. This was possible because the Mexican emissions regulations remained relatively free at the time.

In 1981, General Motors of Canada (GMCL) produced a special order of 25,500 four-door Malibu sedans at their Oshawa plant for Saddam Hussein's Iraqi government. The deal was reportedly worth $100 million to GMCL.