The Chevrolet Lumina is an automobile that was marketed by the Chevrolet division of General Motors from 1989 to 2013. Introduced to consolidate the Chevrolet mid-size nameplates under a single product range, five different generations of the Lumina were produced. The first two generations were sold nearly exclusively in North America, with successive versions sold in other markets worldwide. The first generation of the Lumina replaced the Chevrolet Celebrity and Chevrolet Monte Carlo under a single nameplate; the mechanically unrelated Chevrolet Lumina APV minivan served as the successor for the Celebrity station wagon. The model line was based on the front-wheel-drive GM10 platform (later designated the GM W platform), shared with Buick, Oldsmobile, and Pontiac. For 1994, the second-generation Lumina was introduced, serving as a substantial exterior revision of the previous generation (the two-door coupe was renamed the Monte Carlo). For the 2000 model year, the Lumina was replaced by the Chevrolet Impala; the model line would retain the W platform through the 2016 model year. Throughout its production, both generations of the Lumina were produced by General Motors Canada at Oshawa Car Assembly (Oshawa, Ontario). For markets outside of North America, the Chevrolet Lumina was derived from other large GM sedans. From 1998 to 2013, the Lumina was marketed in the Middle East and South Africa as a Chevrolet-badged version of the Holden Commodore produced in Australia. From 2005 to 2006, GM Philippines sold the Lumina as a Chevrolet-badged version of the Buick Regal (sharing much of its body with its American counterpart). 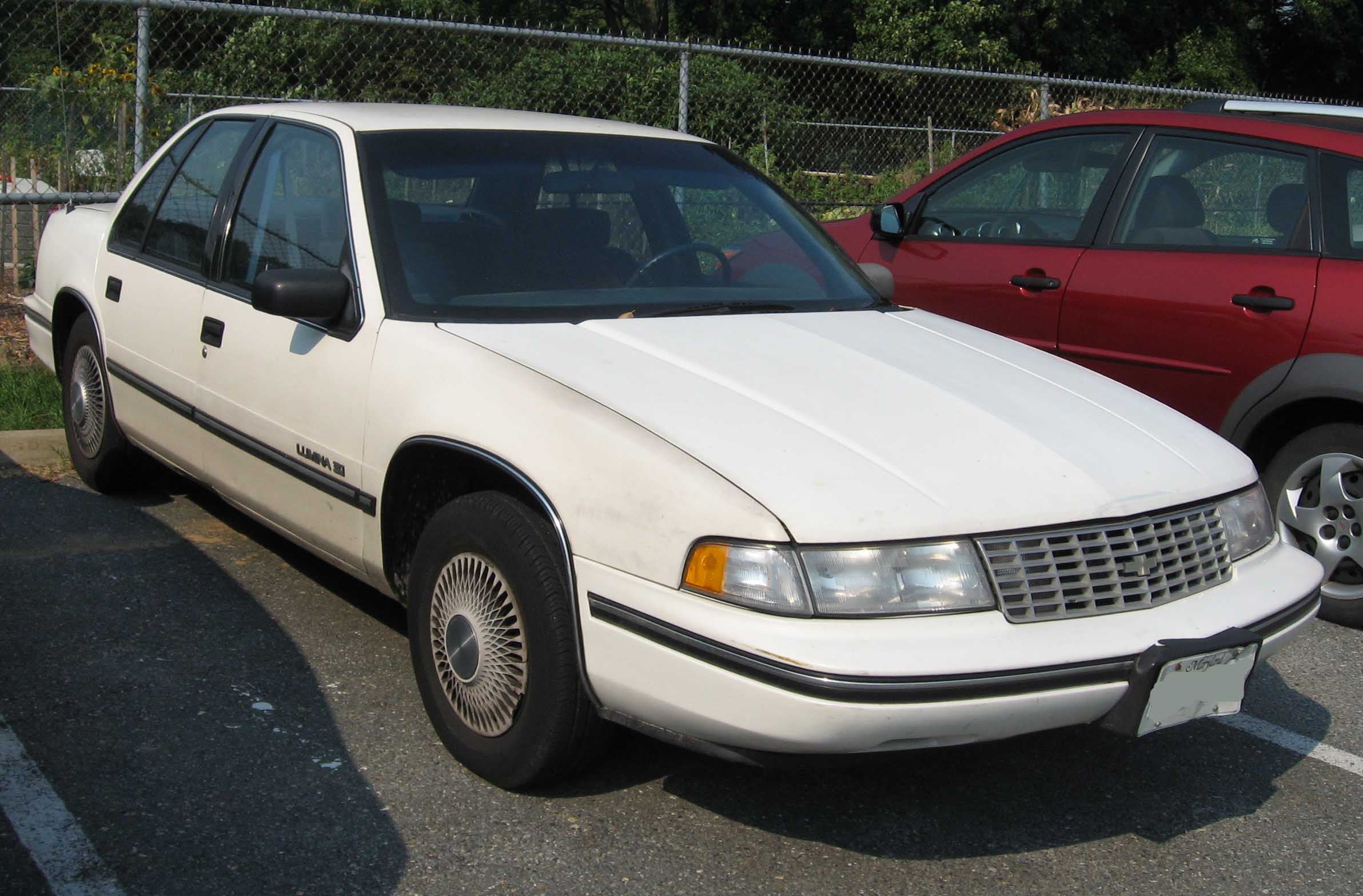 The North American Chevrolet Lumina was based on the mid-size GM W-body, which was shared with the Pontiac Grand Prix, Oldsmobile Cutlass Supreme (later Intrigue), Buick Regal, and Buick Century (after 1996). Although the Lumina became a popular seller, GM was widely criticized in the motoring press for being late to the game in introducing a direct aero-designed competitor to the Ford Taurus. The "Lumina" name was considered by Ford in the pre-production stage of the Taurus. The Chevrolet Lumina's first generation ended production in August 1994, making this the shortest-lived generation of the first-generation GM W-body cars. 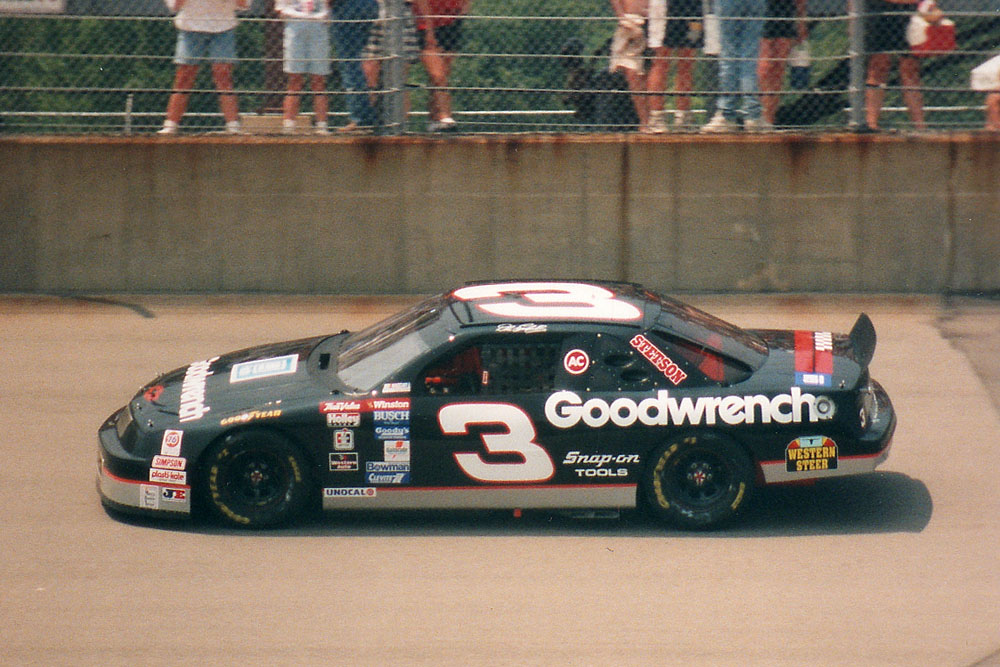 In 1989, the Lumina became the nameplate under which Chevrolets were raced in NASCAR, more than a year before the model was available to the public. As a result, NASCAR received many letters complaining about the unfair advantage of Chevrolet racing an "aluminum" car. Chevrolet signed a deal with Disney-MGM Studios to make the 1990 Lumina the company's Official Car. Early Lumina ads included Disney animated characters from ''Fantasia'' under license from Disney; In return, the Lumina was made the official car of Disney World. In one sequence, advertising the car’s spacious interior, cartoon hippopotami were used to demonstrate the Lumina's wider rear door swings which Chevrolet claimed made for easier access to the rear seat area. While popular, the ads were soon cancelled when focus groups revealed that they remembered the Disney characters better than they remembered the car itself.

thumb|left|Chevrolet Lumina LTZ rear General Motors began development of an updated Lumina in 1989, under chief engineer Norm Sholler, planned for a late 1992 launch. By 1991, a final body design was approved. Development eventually took longer than planned, delaying launch by 18 months. The redesigned Lumina was unveiled at the Los Angeles Auto Show in January 1994 as a 1995 model. The 1995 Lumina received a rounded body, increasing its size, as well as an updated interior. Unlike its other W platform counterparts, the Lumina retained the first-generation chassis. Replacing the Lumina two-door coupe was the resurrected Monte Carlo. The LH0 V6 was dropped in favor of the L82 V6, known as the 3100 SFI; the latter engine produced 20 more horsepower from the same displacement due to a revised intake manifold and cylinder heads. Initial trim levels consisted of ''base'' and ''LS''; the latter replacing the "Euro" trim. Options included an electric sunroof, leather bucket seats, power windows, power driver seat, and an AM/FM stereo with CD player. This Lumina was also sold with police (code 9C3) and taxi packages, because the Chevrolet Caprice was discontinued after the 1996 model year. Production began on Monte Carlo coupes in February 1994 and March 7, 1994 for Lumina sedans at GM's Oshawa manufacturing plant, for a June 6, 1994 market launch for the 1995 model. The LTZ trim was introduced in 1996 for the 1997 model year because the Impala SS and Caprice were discontinued. Standard features included 16" brushed aluminum wheels, blackwall radial sport tires, sport tuned suspension, a 3.1 L V6 rated at and or an optional 3.4 L V6 rated at and of torque, a rear spoiler, restyled front and rear body clips (resembling the Monte Carlo Z34), a tachometer, and a floor-mounted shifter. In 1997 for MY 1998, the 3.4 L V6 was replaced by the 3800 Series II which produced and of torque. Despite its increased torque, the 3.8 L LTZ demonstrated slightly worse performance due to its lowered horsepower, with 0-60 mph (0–97 km/h) times of 7.5 seconds (as opposed to 7.2 seconds for the LQ1) and 1/4 mile (~400 m) times of 15.7 seconds (as opposed to 15.5 seconds for the LQ1). The car has a computer-limited top speed of and the rev limiter kicks in at 5,800 rpm for the 3.8 L (rev limiter is at 7,000 rpm for the 3.4 L LQ1). Also in 1997, the 1998 model year Luminas received second generation airbags. The front-wheel-drive Chevrolet Impala was introduced as a replacement for the Lumina in 2000, although GM produced 2001 model year Luminas to be exclusively sold for rental fleets. Retail sales of the Lumina ended in Canada in 1999, with the United States following a year later. Fleet production ended on April 26, 2001. In some Asian countries, the Lumina continued as a rebadged Buick Century/Regal.

The Australian GM subsidiary, Holden, manufactured a third and fourth generation Lumina based on the rear-wheel-drive Commodore (VX, VZ and VE series) sedan and Ute coupé utility. This model was exclusively manufactured for export primarily to the Middle East and South Africa. Luxury specifications of these sedans were also exported in Brazil as the Chevrolet Omega. High-performance models were powered by Chevrolet V8 engines, including the high specification Pontiac G8 based on the VE Series, exported to the United States.

The Chinese-built Buick Regal was also sold in the Philippines from 2005 to 2006 as the Chevrolet Lumina. GM had withdrawn from the Philippines in 1985 along with Ford, finding the political and economic situation there at the time was untenable. This left just Nissan, Toyota and Mitsubishi operating in the Filipino market. In 1997, GM returned with the Opel brand, and introduced the Opel Vectra, Opel Omega and, shortly thereafter, the Opel Tigra and Opel Astra. In 2000, Chevrolet returned with the Chevrolet Suburban and GMC Savana, and GM dealerships were branded as GM AutoWorld. But Opel struggled in the Filipino market and by 2000 the market was still dominated by Japanese automakers who accounted for 80% of the total market (Koreans were the next biggest players with 15%). The Vectra struggled against rivals like the Nissan Cefiro, Honda Accord and Toyota Camry. GM withdrew the brand in 2003, leaving the corporation without a car in the mid-size segment. And in 2005, GM Philippines introduced Chevrolet Lumina, due to the growing mid-size sedan market. The Lumina only had a 2.5 liter V6 as the only engine offered in the market, making at 152 hp and 154 lbs. ft. of torque. Mated to the Lumina's engine is a four-speed automatic, producing a 173-km/h top speed and a 0-100km/h time of 12.8 seconds. The emissions are kept to a minimum in this car, thanks to a EURO II-level three-way catalytic converter. And the primary safety system features a four-wheel disc brakes with anti-lock braking systems (ABS), an onboard vehicle diagnosis system, a tire pressure monitor and a integrated turn signal/headlight housings in transparent crystal. In case of accidents, five seatbelts (two for the front passengers, three for the rear) and front dual airbags restrain passengers from slamming towards the dashboard. To reinforce cabin protection, the Lumina's body features an integrated steel body structure (with impact protection) and GM's proprietary Safety Steel Four-Door Beams. To prevent theft, the Lumina features an engine immobilizer and a central locking system. Its main features consists of keyless entry, its eight-way power adjustable driver's seat, its remote trunk opener and power-assisted dashboard gauge cluster-level side mirror adjuster. The steering wheel features a leather-wrapped steering wheel (with a tilt-adjustable steering column) and hydraulic power steering. It also had leather appointments and faux wood trim found all around the Lumina's interior, along with a rear seat storage armrest (plus dual cupholders), electronic climate control and a compact disc (CD)/radio-ready head unit with six speakers and a glass-printed antenna. The car costed at around 1.290M Php at the time and was quite a bit larger than the Vectra, measuring 20 inches longer and around 5 inches wider. This made it the largest car in its class, larger and wider than its main competitors, the Honda Accord and the Toyota Camry. The car was praised for being comfortable, spacious and well-equipped. And the design was also criticized for being a "bit too bland". As the car was also short-lived. China ceased production of the Regal in 2008 and so the Chevrolet Lumina was discontinued from the Filipino market in 2006, leaving GM again without a mid-size sedan. Sales were poor, making the Lumina a very rare car in the Philippines. In 2013, Chevrolet Philippines introduced the eighth generation Chevrolet Malibu as the successor to the Lumina, as it marked Chevrolet's return to the executive sedan segment since the Lumina from the mid 2000's. The Ninth Generation Malibu was Launched in the Philippines in 2018, competing with rivals like the Toyota Camry and the Honda Accord and even a handful of more expensive European models.