The Centre Party ( sv, Centerpartiet, C) is a liberal and agrarian
political party A political party is an organization that coordinates candidates to compete in a country's elections. It is common for the members of a political party to have similar ideas about politics, and parties may promote specific political ideology, ...
in Sweden. It is a member of the
Alliance of Liberals and Democrats for Europe The Alliance of Liberals and Democrats for Europe (ALDE; french: Alliance des Démocrates et des Libéraux pour l'Europe, ADLE) is a transnational alliance between two European political party, European political parties, the Alliance of Liberals ...
, the
Liberal International Liberal International (LI) is the political international federation for liberalism, liberal political parties. It was founded in Oxford in 1947, and has become the pre-eminent network for liberal parties and for the strengthening of liberalism ...
and the Renew Europe parliamentary group. Founded in 1913 as the Farmers' League ( sv, link=no, Bondeförbundet, B) and traditionally part of the Nordic agrarian party family, the Centre Party has increasingly shifted its focus towards free-market economics, environmental protection, gender equality and decentralisation of governmental authority. The party has held the position of Prime Minister of Sweden three times, most recently Thorbjörn Fälldin from 1979 to 1982. The party's major issues are the Economy, national economy, the Biophysical environment, environment and social integration. It is represented in all of the Riksdag's parliamentary committees, currently holding 31 seats and providing external support to the Löfven II Cabinet. 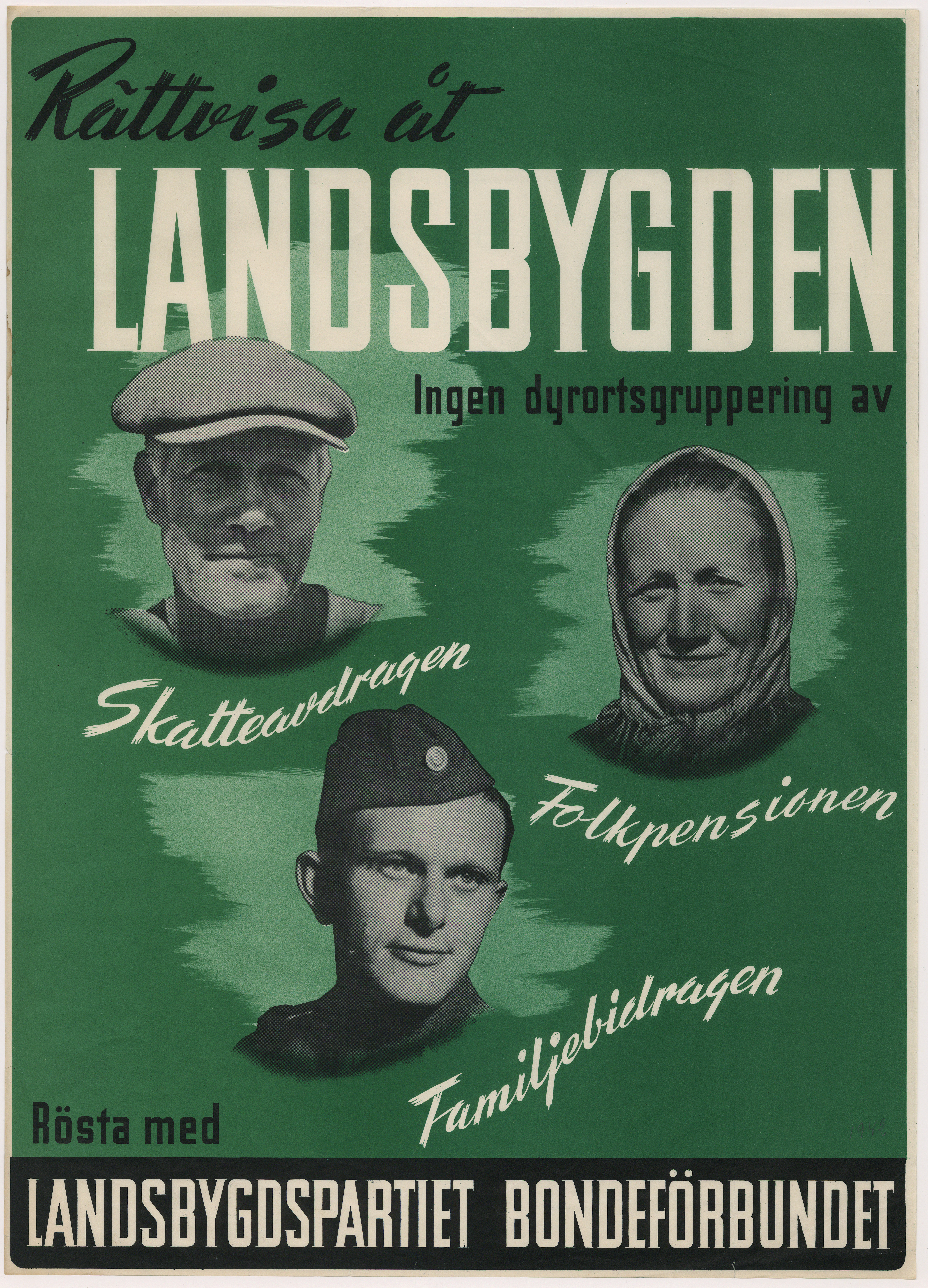 The party was founded in 1913 as the Farmers' League ( sv, Bondeförbundet, B). In 1922, it merged with the ( sv, link=no, Jordbrukarnas Riksförbund, JR) party adopted its current name in 1957. At that time, it had been the closest ally of the centre-left Swedish Social Democratic Party for twenty-five years and its Coalition cabinet, coalition partners between 1936 and 1945 as well as between 1951 and 1957. However, it has since revised this strategy in order to establish a closer long-term alliance between the centre-right ''borgerlig'' ("bourgeois" or "nonsocialist") parties that achieved power between 1976 and 1982 and between 1991 and 1994. Thorbjörn Fälldin was the leader of the Centre Party and Prime Minister from 1976 until 1982, except a short interregnum in 1978–1979 by the Liberals (Sweden), Liberal People's Party leader Ola Ullsten. The Centre Party again joined a centre-right government following the 1991 Swedish general election, 1991 general election led by Moderate Party leader Carl Bildt. During the leaderships of Maud Olofsson and Annie Lööf in the 2000s, the party has positioned itself clearly on the political right as a small business-friendly party, leaning towards neoliberal and right-libertarian policies and viewing the Social Democrats as its main opponent. In 2005, the Centre Party sold its ownership of the newspaper group Centertidningar AB for 1.8 1000000000 (number), billion Swedish krona, SEK, making it the richest political party in the world at the time.

The 2006 Swedish general election was a success for the Centre Party. Its support had been slowly increasing through recent elections, receiving 5.1% of the votes in 1998 and increasing this to 6.2% in 2002. In the 2006 Sedish general election, 7.88% of the vote went to the Centre Party, entitling the party to 29 of the 349 seats in the Riksdag. Furthermore, their alliance with the other parties in the Alliance (Sweden), Alliance for Sweden, a centre-right coalition which won a majority of parliament seats in this election, meant that the Centre Party shared the ministry posts with their Alliance for Sweden allies, namely the Moderate Party, the Liberal People's Party (Sweden), Liberal People's Party and the Christian Democrats (Sweden), Christian Democrats. The strong victory by the Centre Party has been studied by political scientist Lina M. Eriksson, who in her dissertation from the Department of Government at Uppsala University, entitled "Natural Disasters and National Election", performs a rigorous statistical analysis of election data combined with interviews with Maud Olofsson, Eskil Erlandsson, Ulrica Messing and Mona Sahlin. Eriksson's research finds that both the Indian Ocean's 2004 Boxing Day Tsunami and the 2005 Cyclone Gudrun (Erwin) which struck only two weeks following the tsunami are major events that impacted government popularity in the general election and contributed to the redistribution of voter support within and across party-blocs, with particularly interesting results for the Centre Party. According to this research, "[t]he core findings from this thesis show that the Swedish Social Democratic Party (S) government's poor crisis response to Gudrun, which is the hitherto most costly natural disaster in Swedish history, alone has an estimated effect of a magnitude that likely contributed to the 2006 historic regime shift, while the tsunami also seems to have mattered. The tsunami is particularly interesting, as S's poor international crisis response to the event constitutes the first natural disaster situation to knowingly have affected an election on the other side of the planet. Moreover, to some degree voters recognized the active opposition by C as effective representation and rewarded the party for its strong stance on the poor handling of both events by S. In fact, the active voice of C concerning these disasters likely helped move the party from the periphery of party politics to becoming the third-largest party in Swedish politics". Part of the dissertation has been published in ''Electoral Studies'' which is to be considered the leading scientific journal in election research. In the article, long-term effects are also found over the 2010 Swedish general election, 2010 and 2014 Swedish general elections, implying that the Cyclone Gudrun in particular triggered long-lasting changes in voter support from the left to the right side of the political spectrum. A comprehensive summary of the dissertation is available for download via Uppsala University.

The party has been described as one of Sweden's most Classical liberalism, market liberal parties in liberal, socialist and conservative media. However, the party describes itself as "a party with a green, social and decentralised liberalism". The party leadership has advocated neoliberalism and right-libertarianism. The party advocates lower taxes, greatly reduced employer contributions, a freer market and an increased RUT-deduction. The party is a big advocator for small-business, farmers and entrepreneurs. They also want to invest in the infrastructure and transportation so that employees could work in bigger cities but still live in the rural areas and vice versa. On economic policy, they view the Swedish Social Democratic Party, Social Democrats and the Sweden Democrats as their opponents.

The party is liberal on immigration, seeking to combine generous immigration policy with an initially more restrictive contribution policy to the immigrants. After the European migrant crisis, the party proposed to replace the existing establishment grants with establishment loans, similar to the Student financial aid (Sweden), Swedish student loans. The balance of the state responsibility of accepting refugees with their responsibility for integration into Swedish society is at the core of the party policy. In January 2016, the party for example proposed to give all immigrants compulsory civic education in both rights and expectations from the society.

The party is a decentralist pro-European party that believes that the European Union is an important union to secure peace, freedom and trade between the European countries. The party also advocates a smaller but sharper European Union that focuses on democracy and peace, free movement and trade, vigorous action against climate change and collaboration against organized crime while also believing that Sweden should stay outside the monetary union and keep the Swedish krona, krona as the currency. The party is a member of the Alliance of Liberals and Democrats for Europe Party, ALDE party and its European Parliament group Renew Europe. MEP Fredrick Federley is a vice-president of the ALDE Party and the group leader of the ALDE group in the European Parliament Committee on Industry, Research and Energy. In the European Committee of the Regions, the Center Party sits in the Renew Europe in the European Committee of the Regions, Renew Europe CoR group with one full and one alternate member for the 2020-2025 mandate.

The Centre Party owned a media consortium called Centertidningar AB. It included newspapers that the party had either started on their own or brought from competitors. It included ''Hallands Nyheter'', ''Södermanlands Nyheter'', ''Länstidningen i Södertälje'', ''Nynäshamns Posten'', ''Norrtelje Tidning'', ''Lidingö Tidning'', ''Ljusdalsposten'', ''Östersunds-Posten'', ''Hälsingekuriren'' and ''Hudiksvalls Tidning''. The consortium was split in 2005 and sold to Mittmedia, Stampen Group and Vestmanlands Läns Tidning, VLT for a total of 1.815 billion Swedish krona, Swedish kronor.

Traditionally, most of the voters and votebank come from rural areas and quite a few are farmers and agricultural producers. Since the takeover of Maud Olofsson in recent years, the party has been attracting liberal voters from urban areas in central Sweden. It is believed that voters from the Liberal People's Party (Sweden), Liberal People's Party have been moving to the Centre Party due to changes in both parties.

Leaders of the Centre Party

The Leader of the Centre Party is the highest political and organisational officer as the party leader is also the Party chair, president in the Board of directors, National Executive Board and represents the party on media, in public and with other parties. The party leader has often held an important Minister (government), cabinet protfolio when the party has been part of a coalition. The most famous leader of the Centre Party is Thorbjörn Fälldin, Prime Minister of Sweden, Prime Minister in the late 1970s and early 1980s. The Centre Party had the first female leader of a party in the Riksdag was Karin Söder, also Sweden's first female Minister for Foreign Affairs (Sweden), Minister for Foreign Affairs. The party leaders were: * Erik Eriksson (politician), Erik Eriksson (1916–1920) * Johan Andersson (Swedish Centre Party politician), Johan Andersson (1920–1924) * Johan Johansson i Kälkebo, Johan Johansson (1924–1928) * Olof Olsson (politician), Olof Olsson (1928–1934) * Axel Pehrsson-Bramstorp (1934–1949) * Gunnar Hedlund (1949–1971) * Thorbjörn Fälldin (1971–1985) * Karin Söder (1985–1987) * Olof Johansson (1987–1998) * Lennart Daléus (1998–2001) * Maud Olofsson (2001–2011) * Annie Lööf (2011–present)