BoltBus is an intercity bus common carrier that operates low-cost, non-stop and limited-stop, premium level routes in the northeast and western United States and British Columbia, Canada. In the northeast, BoltBus provides service along the Interstate 95 corridor between Boston and Washington, DC. On the west coast, BoltBus service is offered in Oregon, Washington and British Columbia, Canada. BoltBus is owned by Greyhound Lines and uses the company's operating authority, but it is operated as a distinct business with little advertisement of the corporate connection. BoltBus competes with other low-cost carriers such as Megabus and Chinatown bus carriers. The BoltBus branding incorporates a lightning bolt logo similar to the one used by the British Union of Fascists. A spokesperson for Greyhound claimed in an interview that the resemblance was purely coincidental and not intentional. 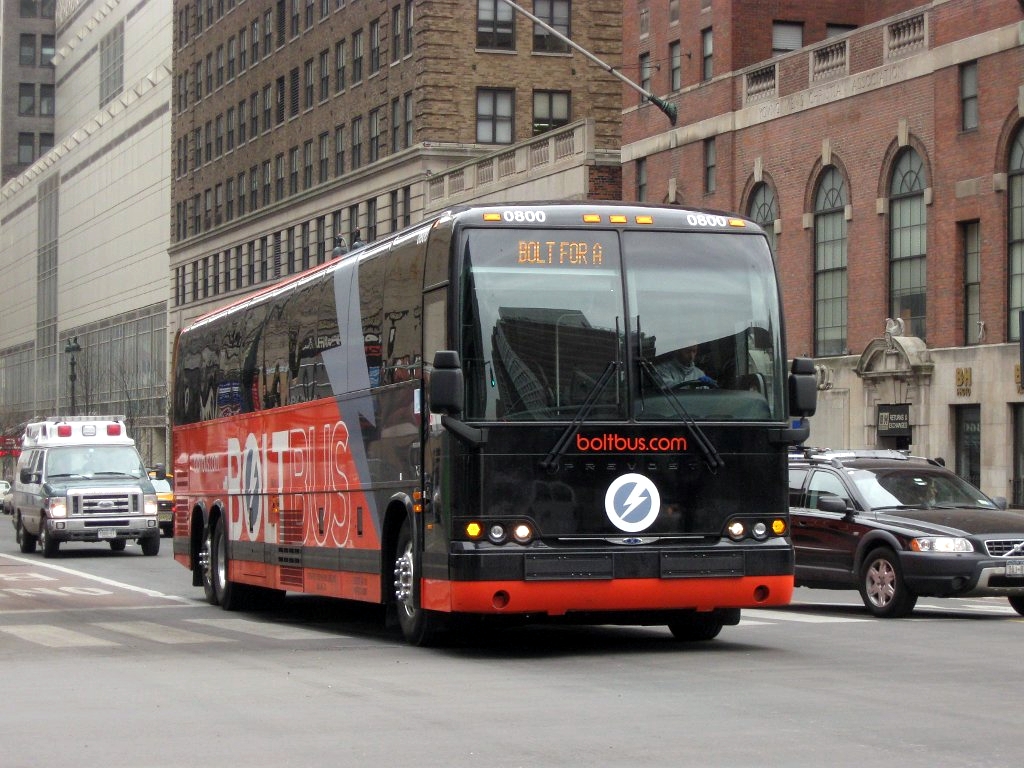 Facing increasing competition from low-cost Chinatown bus carriers in the northeast, Greyhound and Peter Pan Bus Lines partnered to launch BoltBus as a low-cost, non-stop brand. Service began over the course of a month in early 2008. The first route to begin operation was between New York and Washington, D.C. on March 27, 2008, followed by a route between New York and Philadelphia on April 10, 2008, and between New York and Boston on April 24, 2008. Over the following years service was expanded several more times, with stops in Baltimore and Greenbelt, Maryland added in 2009, a stop in Newark added on March 24, 2011. After a lengthy legal skirmish, Greyhound and Peter Pan Bus Lines announced that they would no longer be partnering together. As part of a legal settlement, Greyhound became the sole owner of BoltBus, effective September 27, 2017. The BoltBus network in the northeast radiates from New York City. Service is currently available between New York City and Boston's South Station Bus Terminal, Washington, D.C.'s Union Station, Baltimore's Penn Station, the Greenbelt Metro station in Greenbelt, Maryland, Newark's Penn Station and Philadelphia from both the 30th Street Station in University City and the Cherry Hill Mall in the suburb of Cherry Hill, New Jersey.

Unlike parent Greyhound, all tickets sold on BoltBus are for reserved seating and buses are not oversold. On each trip, at least one ticket is sold for $1, with most pre-booked tickets priced in the $10–$20 range, via the yield management model. BoltBus sells the $1 tickets at random within the first few seats sold. The $1 fare is the basis for its slogan "Bolt for a Buck". Since buses do not operate out of traditional stations with ticket windows, passengers are encouraged to purchase tickets either online or on the phone before heading to the bus stop, but drivers will also accept cash from "walk-up" passengers, if space is available (walk-up tickets typically cost 30% more than online fares). When ticketed, passengers are assigned to a boarding group (S, A, B & C). Passengers who purchased their tickets earlier get a better boarding group assignment, allowing them to board the bus and choose their seats earlier. Passengers who are members of the Bolt Rewards program are always assigned to the A boarding group. Passengers who have special needs are assigned to the S boarding group and are allowed to board before other passengers.

BoltBus routes use Prevost X3-45 and MCI D4505 coaches. All motorcoaches are equipped with wireless internet access and seats that have armrests, footrests, seat belts, cup holders. Most seats have a pair of 120-volt power outlets. The motorcoaches used on BoltBus have 5 fewer seats than the industry standard, giving passengers additional legroom and eliminating the middle seat from the last row.

* Bowen, Alison
"Boltbus, Megabus and Fung-Wah: Curbside buses more dangerous: Buses that pick up passengers off the street are more dangerous than those that use a terminal, a new report found"
''Metro'' newspaper, New York City, October 31, 2011