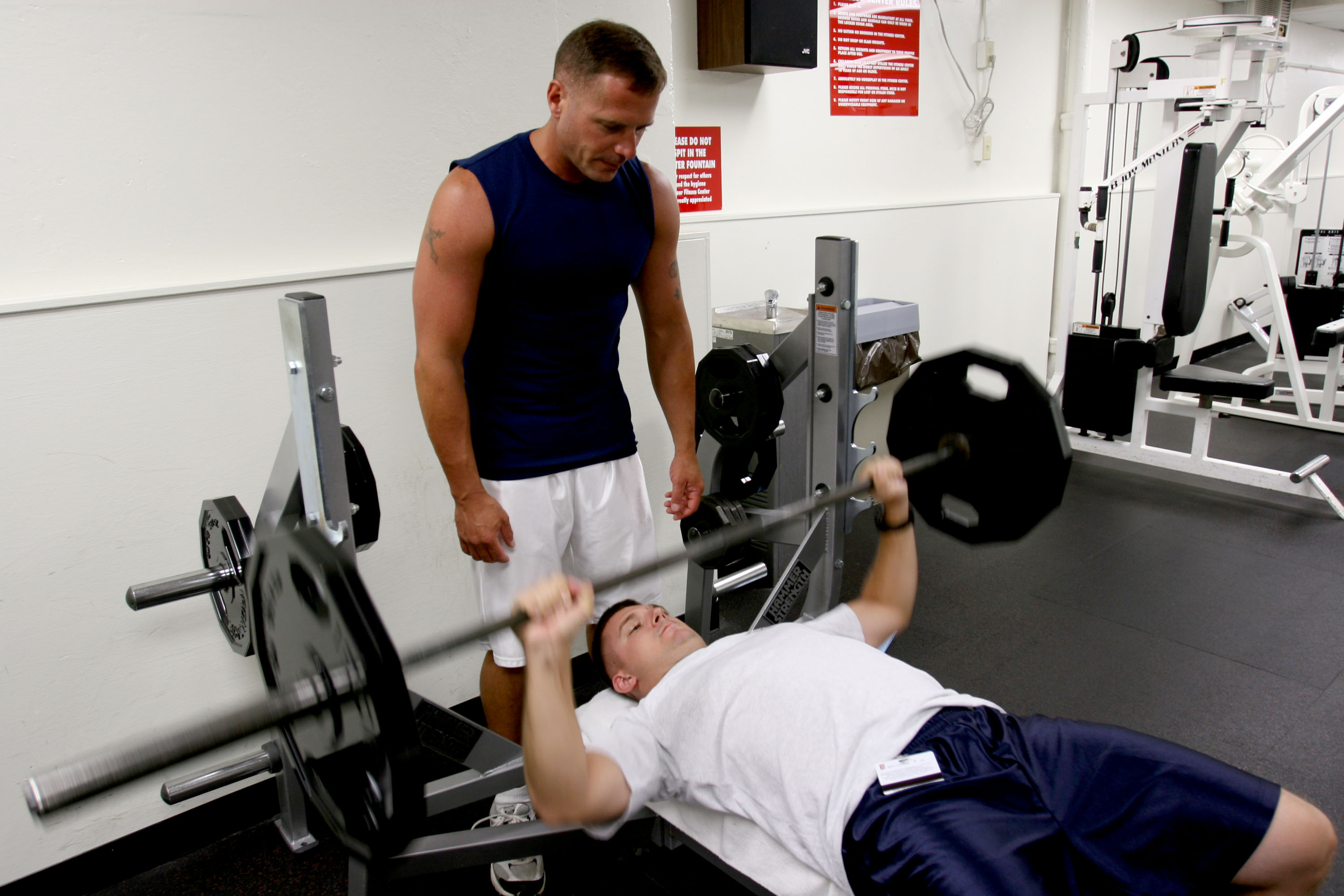 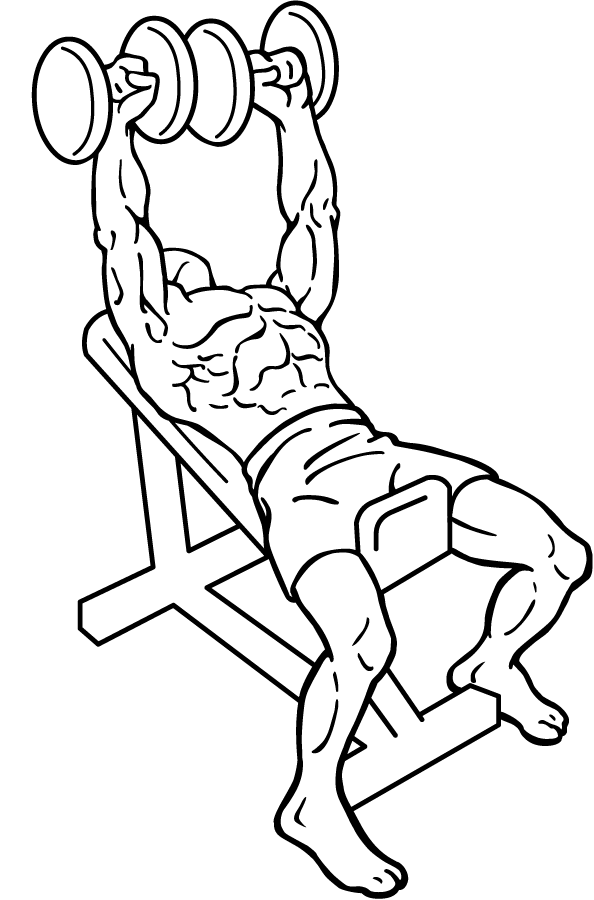 The bench press is an upper-body weight training exercise in which the trainee presses a weight upwards while lying on a weight training bench. The exercise uses the pectoralis major, the anterior deltoids, and the triceps, among other stabilizing muscles. A barbell is generally used to hold the weight, but a pair of dumbbells can also be used. The barbell bench press is one of three lifts in the sport of powerlifting alongside the deadlift and squat, and is the only lift in the sport of Paralympic powerlifting. It is also used extensively in weight training, bodybuilding, and other types of training to develop the chest muscles.

The person performing the exercise lies on their back on a bench with a barbell grasped in both hands. They lower the barbell to chest level, then press the barbell upwards, extending the arms until the elbows are locked out. This is one repetition (rep). Powerlifting: Take position on a flat bench with body weight resting on buttocks and upper traps having an arched back and feet driven into the floor. Movement requires the weight to be taken at full arms' length, lowered to upper torso, paused, and then lifted to starting position.

The bench press has evolved over the years, from floor, bridge, and belly toss variations to the methods used by bodybuilders and powerlifters today. It became popular from the late 1950s onwards. Despite the fact the parallel dip is safer (the dip does not require spotters or safety bars), in the 1950s the bench press took over the dip in popularity and became the standard fare for chest exercises. At first the strict floor press was the most popular method. In 1899, using a barbell with discs (plates), George Hackenschmidt, inventor of the barbell hack squat, rolled a barbell over his face (which was turned to the side) and performed a strict floor press with . This stood as a record for 18 years until Joe Nordquest broke it by in 1916. Around this time, new methods started gaining ground. Lifters started figuring out that strong glutes could help them get the bar from the ground to overhead. They would lie on the floor and position the bar over their abdomen, then perform an explosive glute bridge movement, catapulting the bar upwards and catching it at lockout. Lifting techniques, training and drugs have improved over the years and the bench press record lift has grown from to (equipped, record held by Will Barotti) in approximately 100 years. The bench press is used as a test of upper-body explosive strength during the NFL combine, where prospective NFL draft picks attempt to get as many reps of 225 lbs as possible.

Variations of the bench press involve different groups of muscles, or involve the same muscles in different ways: *Flat bench press: The flat bench press involves both portions of the pectoralis major muscle but focuses on the lower (sternal) head as well as the anterior deltoid muscle. The term 'bench press' on its own is assumed to refer to a flat bench press. *Incline bench press: An incline elevates the shoulders and lowers the pelvis as if reclining in a chair; this variation emphasizes anterior deltoids with little emphasis at the upper (clavicular) head of the pectoralis major. This variation is called the incline bench press. *Decline bench press: A decline bench press elevates the pelvis and lowers the head, and emphasizes the lower portion of the pectoralis major whilst incorporating shoulders and triceps. *Reverse grip: A reverse grip bench press utilizes an underhand (supinated) grip on the bar. A supinated grip externally rotates the humerus, which puts the shoulders in a much more favorable position for the lift, decreasing injury potential without compromising range of motion. It emphasises the clavicular head of the pectoralis major more than an incline bench press. On the eccentric phase of the lift, the bar path will create a larger arc and eventually touch a point on the chest that is lower compared to the regular bench press, because the upper arms and elbows are closer to the body and the angle between the humerus and the torso is smaller. *Narrow grip: A bench press performed with the hands close together ("close grip") relies on the triceps to complete the pressing motion. Called the close grip bench press, this variation is best performed with arms in a near-vertical position to reduce strain placed upon the wrists, elbows and shoulders. A close grip bench press can also be performed with dumbbells or a barbell with neutral grips. *Wide grip: A bench press performed with the hands far apart ("wide grip") shortens the range of motion, lessening the contribution of the triceps. *Different lowering targets: A lifter can elect to lower the bar to nipple level, to the xiphoid process, or even further, to the abdomen. On the other hand, a lifter may lower the bar to a very high point on the chest, or even to the neck; the latter variation is called a guillotine press and emphasizes the upper pectorals. *Altered stability: The bench press can be performed with various modifications to make the lifter or the weight less stable. Examples include lifting on a Swiss ball, using dumbbells instead of a barbell, or lifting with the legs on the bench or in the air *Variable resistance: The bench press can be performed with chains or bands which are attached to either end of the barbell. They can be used to strengthen the upper range of motion in the movement and develop explosive power in the bench press. This means that the percentage of 1RM lifted for the stronger phase more closely matches the percentage 1RM for the weaker lower phase e.g. a person can lift 60 kg for one full rep (including the weaker lower phase) but can lift 90 kg for the stronger upper phase. So by adding resistance they can better meet the respective 1RMs, in percentage terms, for both strength phases. The incorporation of chains and bands can help to develop explosive power in the bench press. An alternative is to combine heavier partial reps with lighter full reps. *Partial rep: A partial rep usually means lowering the bar partially before raising it again i.e. for a half or quarter rep. Because this is a stronger ROM significantly more weight can be lifted. When used in combination with lighter full reps, this can allow a person to better ensure that the percentage of 1RM lifted for the stronger and weaker phases of the movement is more consistent e.g. a 80 kg full ROM press is 80% of someone’s 1RM for a full rep, and lifting 120 kg for a partial which remains in the stronger phase of the movement is 80% for that phase. If they only trained full reps at a 1RM of 100 kg, then the stronger phase of the lift could not be trained at more than about 66% of its respective 1RM of 150kg. Performing heavier partials can help to increase strength and power and also improve a person’s 1RM for a full ROM press. A different form of partial rep involves training the lower most difficult part of the movement in order to strengthen it and to avoid it being a ‘sticking point’ which stops the movement of the weight. *Equipped: An "equipped" bench press is performed with a stiff, supportive shirt that allows greater weights to be used. The materials and cut of the bench shirt, as well as the skill of the lifter and the rules of performance, will determine how much additional weight can be pressed in the shirt as opposed to without it. The contrast between equipped, and unequipped (raw) bench press weights is illustrated in the progression of the bench press world records, with the record equipped lift exceeding the unequipped lift by hundreds of pounds. *With minor injury: People who suffer from shoulder injuries can use a specialised barbell such as the Swiss Bar or Football Bar that allows them to hold the bar in a neutral grip, reducing the amount of external rotation on the shoulder. It also engages the shoulder more, increasing power in upper body movements. Another variation is the hex press in which two dumbbells are squeezed against each other, with the palms facing inwards. This puts the strain of the exercise on the triceps and inner chest rather than the shoulders. The Floor Press is another variation that puts less strain on the lifter's shoulders, due to the shorter range of motion. 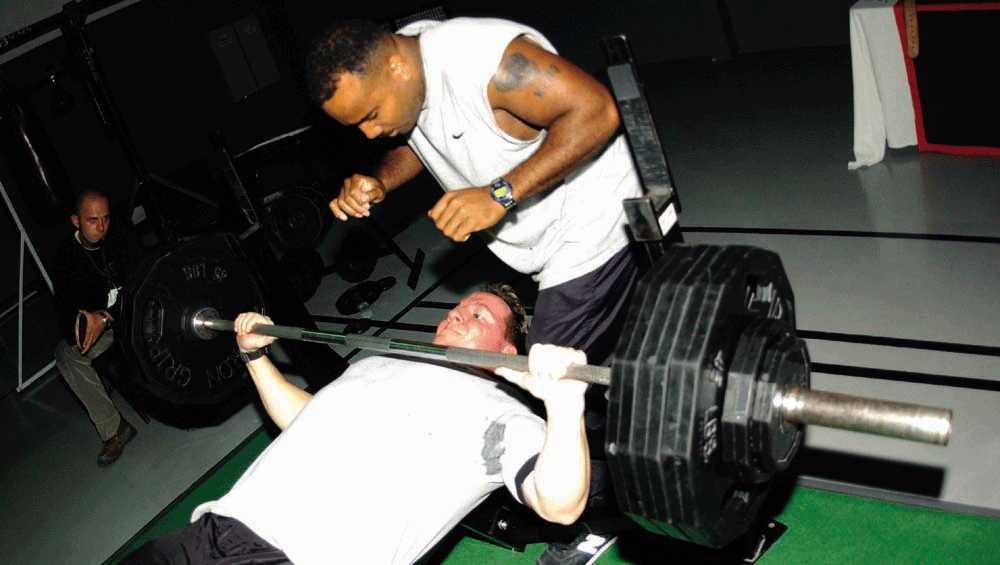 Performing the bench press can contribute to multiple types of injuries: *Torn ligaments / tendons in shoulders *Injuries to the trapezius muscle *Elbow / wrist strains *Cracked or broken ribs, usually the result of bouncing the bar off of the chest to add momentum to the lift or a loss of strength causing the bar to fall onto the chest *Distal clavicular osteolysis: bone spur or erosion at the end of the clavicle. Athletes suffering from this condition should avoid doing bench presses. *Torn or damaged rotator cuff *Pectoral muscle tear *Death by asphyxiation by being trapped under the bar (several each year) Many of these possible injuries can be avoided by using dumbbells instead of a barbell since dumbbells can be dropped without hitting the chest or neck, while also allowing greater external rotation of the shoulder which can help prevent shoulder injuries. Studies have also shown dumbbell bench press activates the pectorals more, which can lead to increased muscle growth.