Click Here for Items Related To - Bank of India

n government owned bank under the
ownership Ownership is the state or fact of exclusive rights and control over property Property (''latin: Res Privata'') in the Abstract and concrete, abstract is what belongs to or with something, whether as an attribute or as a component of said thing ...
of Ministry of Finance , Government of India with headquarters in Bandra Kurla Complex,
Mumbai Mumbai (, ; also known as Bombay , List of renamed Indian cities and states#Maharashtra, the official name until 1995) is the capital city of the Indian States and union territories of India, state of Maharashtra. According to the United Nat ...

. Founded in 1906, it has been government-owned since nationalisation in 1969. Bank of India has 5,316 branches as of 31 March 2019, including 56 offices outside India, which includes five subsidiaries, five representative offices, and one joint venture. BoI is a founder member of SWIFT (Society for Worldwide Inter Bank Financial Telecommunications), which facilitates provision of cost-effective financial processing and communication services.

Bank of India was founded on 7 September 1906 by a group of eminent businessmen from
Mumbai Mumbai (, ; also known as Bombay , List of renamed Indian cities and states#Maharashtra, the official name until 1995) is the capital city of the Indian States and union territories of India, state of Maharashtra. According to the United Nat ...

,
Maharashtra Maharashtra (; , abbr. MH) is a state in the western peninsular region of India India (Hindi: ), officially the Republic of India (Hindi: ), is a country in South Asia. It is the List of countries and dependencies by population, second-m ...
, India. The Bank was under private ownership and control till 19 July 1969 when it was nationalised along with 13 other banks. Beginning with one office in Mumbai, with a paid-up capital of and 50 employees, the Bank has made a rapid growth over the years and blossomed into a mighty institution with a strong national presence and sizable international operations. In business volume, the Bank occupies a premier position among the nationalised banks. The bank has over 5,100 branches in India spread over all states and union territories including specialized branches. These branches are controlled through 54 zonal offices. There are 60 branches, 5 subsidiaries, and 1 joint venture abroad. The Bank came out with its maiden public issue in 1997 and follow on Qualified Institutions Placement in February 2008.

The earlier holders of the Bank of India name had failed and were no longer in existence by the time a diverse group of Hindus, Muslims, Parsees, and Jews helped establish the present Bank of India in 1906 in Bombay. At the time, banks in India were either owned by Europeans and served mainly the interests of the European merchant houses, or by different communities and served the banking needs of their own community. The promoters incorporated the Bank of India on 7 September 1906 under Act VI of 1882, with an authorised capital of divided into 100,000 shares each of . The promoters placed 55,000 shares privately, and issued 45,000 to the public by way of IPO on 3 October 1906; the bank commenced operations on 1 November 1906. The lead promoter of the Bank of India was Sir Sassoon J. David (1849–1926). He was a member of the Sassoon family, who in turn were part of a Bombay community of Baghdadi Jews that was notable for its history of social service. Sir David was a prudent banker and remained the bank's chief executive from its founding in 1906 until his death in 1926. The first board of directors of the bank consisted of
Sir Sassoon David 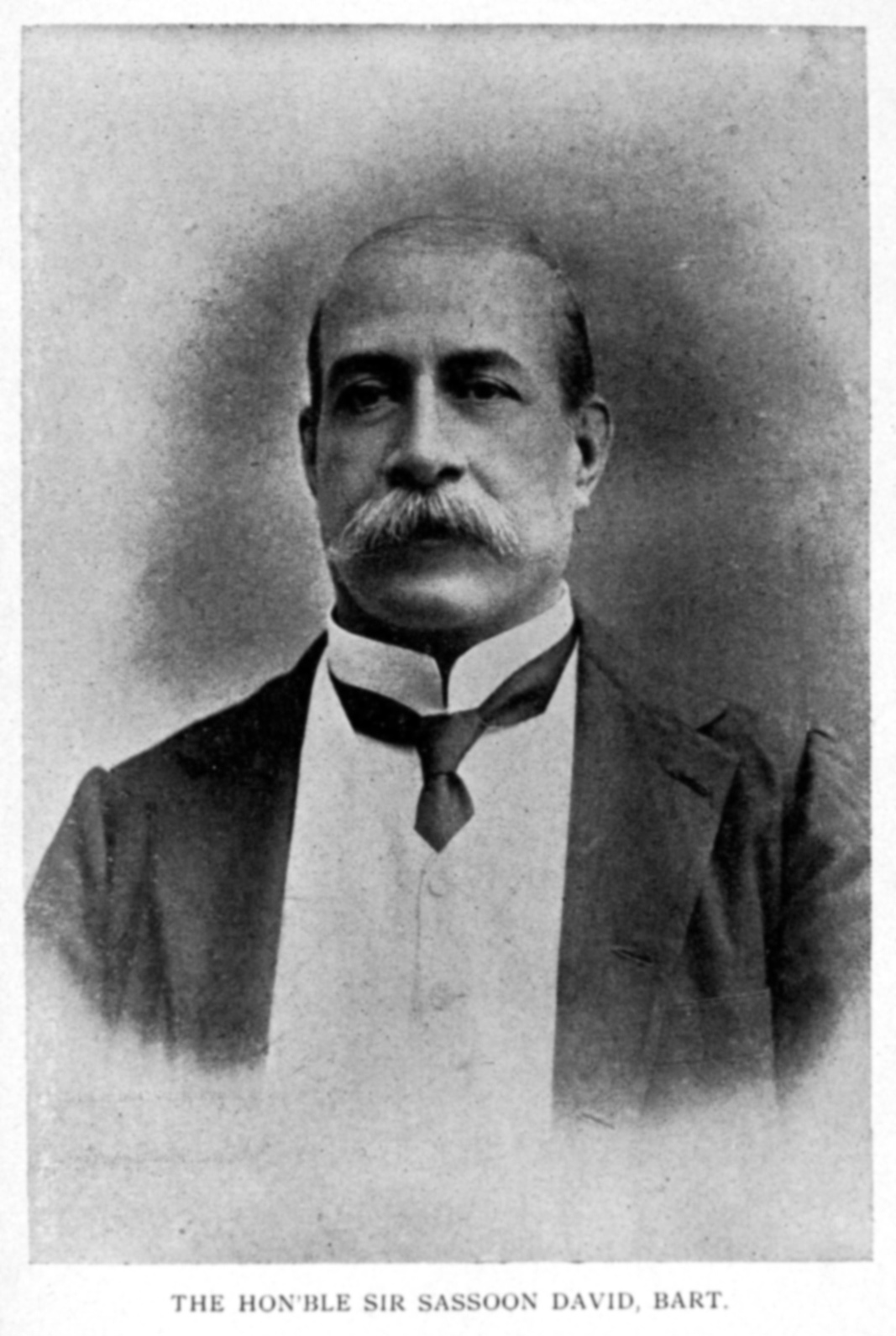 , Sir Cowasjee Jehangir, J. Cowasjee Jehangir, Sir Frederick Leigh Croft, Ratanjee Dadabhoy Tata, Gordhandas Khattau, Lalubhai Samaldas, Khetsety Khiasey, Ramnarain Hurnundrai, Jenarrayen Hindoomull Dani, and Noordin Ebrahim Noordin. In 1921, BoI entered into an agreement with the Bombay Stock Exchange to manage its clearing house. BoI's international expansion began in 1946 when the bank BoI opened a branch in London, the first Indian bank to do so. This was also the first post-World War II overseas branch of any Indian bank. The 1950s saw BoI open numerous branches abroad: Tokyo and Osaka in 1950, Singapore in 1951, Bank of India (Kenya), Kenya and Uganda in 1953, Aden in 1953 or 1954, and Tanganyika (territory), Tanganyika in 1955. After a brief hiatus, BoI returned to international expansion, opening a branch in Hong Kong in 1960. A branch in Nigeria followed in 1962. Then came nationalizations abroad, and at home. The Government of Tanzania nationalised BoI's operations in Tanzania in 1967 and folded them into the government-owned National Commercial Bank (Tanzania), National Commercial Bank, together with those of Bank of Baroda and several other foreign banks. Two years later, in 1969, the Government of India nationalised the 14 top banks, including Bank of India. In the same year, the People's Democratic Republic of Yemen nationalised BoI's branch in Aden, and the Nigerian and Ugandan governments forced BoI to incorporate its branches in those countries. The next year, National Bank of Southern Yemen incorporated BoI's branch in Yemen, together with those of all the other banks in the country; this is now National Bank of Yemen. BoI was the only Indian bank in the country. In 1972 BoI sold its Uganda operation to Bank of Baroda. The next year BoI opened a representative office in Jakarta. In 1974 BoI opened a branch in Paris. This was the first branch of an Indian bank in Europe. In 1976 the Nigerian government acquired 60% of the shares in Bank of India (Nigeria). In 1978 BoI opened a branch in New York. Also in the 1970s, BoI opened an agency in San Francisco. In 1980 Bank of India (Nigeria), changed its name to Allied Bank of Nigeria to reflect the fact that it was no longer a subsidiary of Bank of India. In 1986 BoI acquired North Paravur, Parur Central Bank in (Ernakulam District, Kerala State) in a rescue. Parur Central Bank had been founded in 1930, and at the time of its failure had 51 branches. BoI amalgamated Parur Central Bank in 1990. The next year, 1987, BoI took over the three UK branches of Central Bank of India (CBI). CBI had been caught up in the Sethia fraud and default and the Reserve Bank of India required it to transfer its branches. * 2003: BoI opened a representative office in Shenzhen. * 2005: BoI opened a representative office in Vietnam. * 2006: BoI plans to upgrade the Shenzen and Vietnam representative offices to branches, and to open representative offices in Beijing, Doha, and Johannesburg. In addition, BoI plans to establish a branch in Antwerp and a subsidiary in Dar-es-Salaam, marking its return to Tanzania after 37 years. In 2007 BoI acquired 76% of Indonesia-based PT Bank Swadesi. BoI established a wholly owned subsidiary, Bank of India (New Zealand) Ltd., in Auckland, New Zealand on 6 October 2011. Then BoI established a wholly owned subsidiary, Bank of India (Uganda) Ltd., on 18 June 2012. Most recently, BoI opened its wholly owned subsidiary Bank of India (Botswana) Ltd., on 9 August 2013.

The board of Bank of India is examining the possibility of merger with other banks, based on the synergy in business According to Dinabandhu Mohapatra, Managing Director and Chief Executive Officer said on 17 September 2017 that the bank is in the process of strengthening its systems and processes before exploring merger possibilities