Australia Post, formally the Australian Postal Corporation, is the government business enterprise that provides postal services in Australia. The head office of Australia Post is located in Bourke Street, Melbourne, which also serves as a post office. Australia Post is the successor of the Postmaster-General's Department, which was established at federation in 1901 as the successor to colonial post services. In 1975, the department was abolished and its postal functions were taken over by the Australian Postal Commission. The organisation's current name and structure were adopted in 1989 as part of a process of corporatisation.

Before colonial control of mail started in 1809, mail was usually passed on by ad hoc arrangements made between transporters, storekeepers and settlers. These arrangements were flexible, and inherently unstable. It was common for early settlers to ride many miles out of their way to deliver neighbours' mail that had been collected from informal distribution points. The first organisation of a postal service in Australia commenced in 1809 with the appointment in Sydney of the first postmaster. An English ex-convict, Isaac Nichols, took the post operating from his home in George Street, Sydney. His main job was to take charge of letters and parcels arriving by ship, to avoid the chaos of people rushing aboard ships as soon as they arrived at Sydney's wharves. Nichols would pick up the mail and post a list of recipients outside his house. He would advertise in the ''Sydney Gazette'' the names of all those who received mail. Recipients paid a fixed price of one shilling per letter to collect mail from Nichols' home, with parcels costing more depending on how heavy they were. VIP addressees were afforded personal delivery by Nichols. Between 1812 and 1842, postmasters were also appointed in Tasmania (1812), Western Australia (1829), Victoria (1836), South Australia (1837), and Queensland (1842). Settlements outside of the postmasters' domain were serviced by contractors on horsebacks or in coaches. In 1825, the New South Wales Legislative Council passed the ''Postal Act'' which transferred responsibility from Nichols, acting as a private company, to the governor. The governor would then set the wage of the postmaster and the cost of collecting mail. 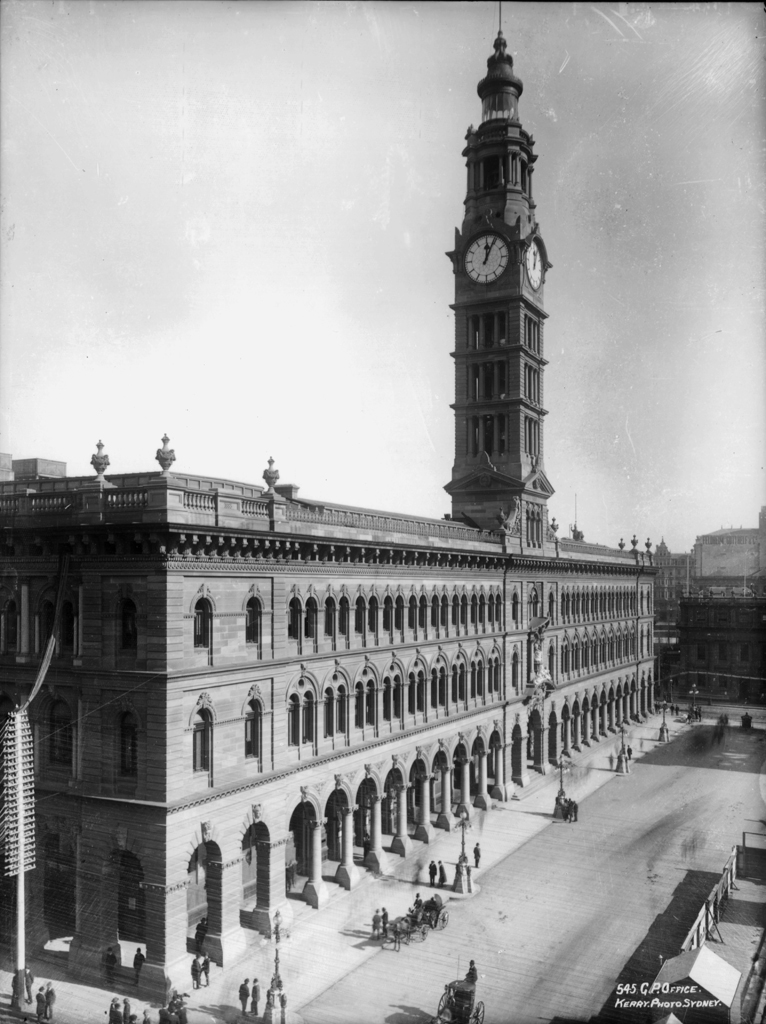 Following federation in 1901, the colonial mail systems were merged into the Postmaster-General's Department (PMG). This body was responsible for telegraph and domestic telephone operations as well as postal mail. An airmail service was introduced in 1914. In 1967, 4-digit postcodes in Australia were introduced, in addition to the world's first mechanical processing centre, which garnered international attention. On 1 July 1975, separate government commissions were created to undertake the operational responsibilities of the PMG. One of these was the Australian Postal Commission. It later became the Australian Postal Corporation on 1 January 1989 when it was corporatised into what is now known as the Australian Postal Corporation, or Australia Post.

Under amendments to the Australian Postal Corporation Act which came into effect in March 2008, quarantine inspection officers of a state or territory are authorised to request Australia Post to open packets and parcels sent from interstate for inspection when inspectors believe they may contain quarantine material. The legislation also authorises Australia Post to remove any mail articles that are suspected of being scam mail. In February 2010, Ahmed Fahour was appointed MD and CEO of Australia Post. In May 2010, he announced a new strategy dubbed "Future Ready" designed to reinvigorate Australia Post. This included a new organisation structure as well as a renewed foray into digital businesses under the "eServices" Strategic Business Unit. However, in 2013, the corporation acknowledged that, though the strategy was successful in improving Australia Post's profitability and structure, it was insufficient in its contributions to their development as a financially self-sustaining business. In September 2015, the corporation announced its first loss in 30 years. The 222 million loss was down from a $116 million profit the previous year. Large decreases in addressed and stamped mail led to a $381 million loss in the mail delivery side of the business. Parcel delivery then accounted for over half of total revenue. Overall revenue was stable at $6.37 billion. In August the following year, Australia Post returned to profit with strong parcel and courier performance, and organisation re-structuring. However, mail performance reached an all-time low. In February 2017, Australian Prime Minister Malcolm Turnbull criticised CEO Ahmed Fahour's $5.6 million annual salary, saying "As the Prime Minister and a taxpayer, I've spoken to the chairman today. I think that salary, that remuneration, is too high." On 23 February 2017, Fahour announced his resignation, effective July 2017, telling media that the decision was not related to discussion of his salary. In October 2019, Australia Post completed a major rebranding project with Melbourne-based brand strategy firm Maud. This project saw the development of a new brand identity, website and self-service platform, parcel and letter packaging, street posting boxes, staff uniforms, and a fleet of custom-designed electric vehicles, amongst others. In 2019 with parcels deliveries increasing while letter deliveries falling, the Post Office transferred several thousand workers from letters to parcels. Also letter deliveries reduced from 5 days per week to 2 days per week.

Responding to competitive pressures, Australia Post continued to broaden its product and service range in 2019, having invested in extensive technology-based infrastructure programmes. It operates in three core areas: letters and associated services; retail merchandise and agency services; and parcels and logistics. It has a number of subsidiaries and joint ventures, including Sai Cheng Logistics International—a joint-venture logistics company established with China Post in 2005. Australia Post operates regular mail delivery as well as an express/courier service through Messenger Post (Now trading as Startrack Courier). It delivers mail every day of the week. Australia Post is self-funding and uses its assets and resources to generate profits, which can be reinvested in the business or returned as dividends to its sole shareholder, the Australian Government. Under its community service obligations, Australia Post is committed to providing an accessible, affordable and reliable letter service for all Australians wherever they reside. The corporation reaches more than 10 million Australian addresses; operates 6,990 postal outlets; and serves more than a million customers in postal outlets every business day. When the basic domestic letter rate was increased to $1.00 on 4 January 2016, there were no changes to prices of concession stamps or seasonal greeting stamps, which remained at 60 cents and 65 cents respectively. At the same time, a category of "Priority" mail was introduced (as distinct from "Regular"), under which delivery standards were varied and a 50-cent Priority label was required as additional payment for the better standard.

Australia Post collects, processes and delivers single parcels or multi-parcel consignments all across Australia and internationally. It also provides complete end-to-end supply chain capabilities, from manufacturer (domestic or international) to consumer with integrated logistics services and a broad range of distribution options to track and trace deliveries.

Australia Post offers a number of digital services outside of their main mail/parcel/logistics area. These include employment screening, online payment services and a digital identity platform.

Australia Post now offers parcel lockers at over 500 locations near Post Offices, supermarkets and train stations. These lockers are free to use for Australia Post deliveries and can be picked up at anytime during day or night. Once delivered, the package must be picked up within 48 hours. Parcel lockers are also available to use for sending prepaid parcels under 16kg, with tracking details updated as soon as you have dropped your parcel off.

On 23 December 2003, Australia Post and Qantas went into a joint venture to acquire StarTrack from the company's founder, Greg Poche. On 18 May 2011 it was announced the merger of the retail division of Australian airExpress (AaE) with StarTrack. StarTrack will be a solely retail-focused business and AaE will focus solely on domestic air linehaul and cargo terminal operations. The changes follow a review of the businesses guided by AUX Investments, a company established in 2010 to guide the review and provide streamlined governance across the businesses. In November 2012, Australia Post bought the 50% of the company owned by Qantas. As part of the deal, Australia Post divested itself of its 50% interest in Australian airExpress to Qantas. On 7 May 2014, StarTrack was rebranded to include Australia Post Post horn in the StarTrack blue colours. StarTrack also took responsibility of Australia Post's "Messenger Post couriers" under the StarTrack brand as "StarTrack Courier"

Australia Post has had a long and difficult relationship with the Communication Workers Union. The union has claimed that contractors provide a poor parcel delivery service, with a newspaper reporting anecdotes of unsatisfactory performance during the peak Christmas period, including a propensity to insert "delivery failure" cards into mailboxes rather than attempting delivery of packages, thus requiring the customer to travel to their local post office to collect items personally. These delivery drivers are usually contractors as opposed to actual Australia Post employees. The relationship between Australia Post and its franchised retail outlets, being the Licensed Post Offices (LPOs) and Community Postal Agencies (CPAs), has had claims of unsustainable business practices made by individuals and the LPO Group, before the Australian Senate undertook an inquiry in 2014. A unanimous report from the inquiry resulted in a range of outcomes and recommendations, including some increased payments and the establishment of an independently chaired stakeholder forum.

In May 2015 Australia Post had a legal battle wit
Sendle
a transnational courier using the slogan "Post without the office". Australia Post claimed that the term was deceptively similar to their trademark and what they stand for. Sendle argued that there was no similarity and that in fact, they were differentiating from Australia Post. Two years were spent in the trademark dispute, which resulted in Sendle winning the case.

Letter boxes for houses and units (condominium) are mostly standard items bought from hardware stores. Letterboxes for farms and sparsely located rural houses are often made from 44-gallon or smaller barrels. Such boxes were formerly numbered using the Rural Mail Box system, but they are now numbered according to distance travelled on a main road. For example, if your property's letter box is located 10.52 kilometers from the start of the main road, your letter box number is 1052. Rural letter boxes are located on the road and not the farm.

On 2 November 2020, the CEO Christine Holgate announced resignation, due to increasing pressure from the Prime Minister Scott Morrison and Communications Minister Paul Fletcher to investigate further into the gifting of four senior executives with the total of $20,000 AUD worth of Cartier watches. The watches were initially reported as $3000 each, tallying $12,000 AUD on purchase. Ms Holgate argued that she did not regret the purchase, as its purpose was to ''"drive positive change"'' and ''"thank and reward positive behaviours".'' Increasing media attention also contributed to her decision, as it was causing much ''"debate and distraction"'' and was negatively impacting her health. She retorted, "I appreciate the optics of the gifts involved do not pass the 'pub test' for many". The reward was reportedly to tip the 4 senior executives who secured a deal in 2018, which allowed the customers of Commonwealth Bank, NAB and Westpac to do their banking at the post office. During Senate Estimates hearing on 22 October 2020, Ms Holgate defended her decision, saying ''"We are a commercial organisation, it was a recommendation from our chair that these people get rewarded"''. Australia Post is owned by the Australian Government, but is commercialized through corporatization, and does not receive funding from the government.