Andrew Ferguson Neil (born 21 May 1949) is a Scottish journalist and broadcaster. He serves as chairman of ''The Spectator'' and GB News, which will launch in 2021. Neil was appointed editor of ''The Sunday Times'' by Rupert Murdoch in 1983, and held this position until 1994. After this he became a contributor to the ''Daily Mail''. He was formerly chief executive and editor-in-chief of Press Holdings Media Group. In 1988 he became founding chairman of Sky TV, also part of Murdoch's News Corporation. He worked for the BBC for 25 years until 2020, fronting various programmes, including ''Sunday Politics'' and ''This Week'' on BBC One and ''Daily Politics'', ''Politics Live'' and ''The Andrew Neil Show'' on BBC Two. Since July 2008, he has been the chairman of Press Holdings, whose titles include ''The Spectator'', and ITP Media Group.

Neil was born in Paisley, Renfrewshire to Mary and James Neil. His mother worked in cotton mills in the war and his father ran the war-time Cairo fire brigade, worked as an electrician and was a Major in the Territorial Army in Renfrewshire. He grew up in the Glenburn area and attended the local Lancraigs Primary School. At 11, Neil passed the Qualifying Examination and obtained entrance to the selective Paisley Grammar School. After school, Neil attended the University of Glasgow, where he edited the student newspaper, the ''Glasgow University Guardian'', and dabbled in student television. He was a member of the Dialectic Society and the Conservative Club, and participated in Glasgow University Union inter-varsity debates. In 1971, he was chairman of the Federation of Conservative Students. He graduated in 1971, with an MA with honours in political economy and political science. He had been tutored by Vince Cable and had a focus on American history.

After his graduation, Neil briefly worked as a sports correspondent for local newspaper, the ''Paisley Daily Express'', before working for the Conservative Party. In 1973, he joined ''The Economist'' as a correspondent and was later promoted as editor of the publication's section on Britain.

End of the Murdoch connection

According to Neil, he was replaced as ''Sunday Times'' editor in 1994 because Murdoch had become envious of his celebrity. Many years later, in November 2017, former Conservative cabinet minister Kenneth Clarke said Neil had been removed because Neil's article about corruption in the Malaysian government of Mahathir Mohamad conflicted with Murdoch's desire to acquire a television franchise in the country. The Malaysian prime minister at the time told Clarke on a ministerial visit that he had achieved Neil's sacking after a telephone conversation with Murdoch. The conflict between Neil and Mohamad did become public knowledge at the time. The British minister of state for trade Richard Needham criticised Neil and the newspaper for potentially putting thousands of jobs at risk. Neil's departure from his role as ''Sunday Times'' editor was officially reported in 1994 as being merely temporary, as he was to present and edit a current affairs programme for Fox in New York. "During my time, the ''Sunday Times'' has been at the centre of every major controversy in Britain", he said at the time. "These are the kind of journalistic values I want to reproduce at Fox". Neil's new television programme did not make it to air. A pilot produced in September had a mixed internal response, and Murdoch cancelled the entire project in late October. Neil did not return to his job as ''Sunday Times'' editor.

Neil became a contributor to the ''Daily Mail''. In 1996, he became editor-in-chief of the Barclay brothers' Press Holdings group of newspapers, owner of ''The Scotsman'', ''Sunday Business'' (later just ''The Business'') and ''The European''. Press Holdings sold ''The Scotsman'' in December 2005, ending Neil's relationship with the newspaper. Neil has not enjoyed great success with the circulations of the newspapers (indeed ''The European'' folded shortly after he took over). ''The Business'' closed down in February 2008. He exchanged his role as chief executive of Press Holdings for chairman in July 2008. Since 2006 Neil has been chair of the Dubai based publishing company ITP Media Group. In June 2008, Neil led a consortium which bought talent agency Peters, Fraser & Dunlop (PFD) from CSS Stellar plc for £4 million, making him chairman of the new company in addition to his other activities. Neil served as Lord Rector of the University of St Andrews from 1999 to 2002.

As well as Neil's newspaper activities he has maintained a television career. While he worked for ''The Economist'', he provided news reports to American networks. His regular interview series for Channel 4, ''Is This Your Life?'' (made by Open Media), was nominated for a BAFTA award for "Best Talk Show". In the course of the series Neil interviewed a wide variety of personalities, from Albert Reynolds and Morris Cerullo to Jimmy Savile and Max Clifford. He acted as a television newsreader in two films: ''Dirty Weekend'' (1993) and ''Parting Shots'' (1999), both directed by Michael Winner. 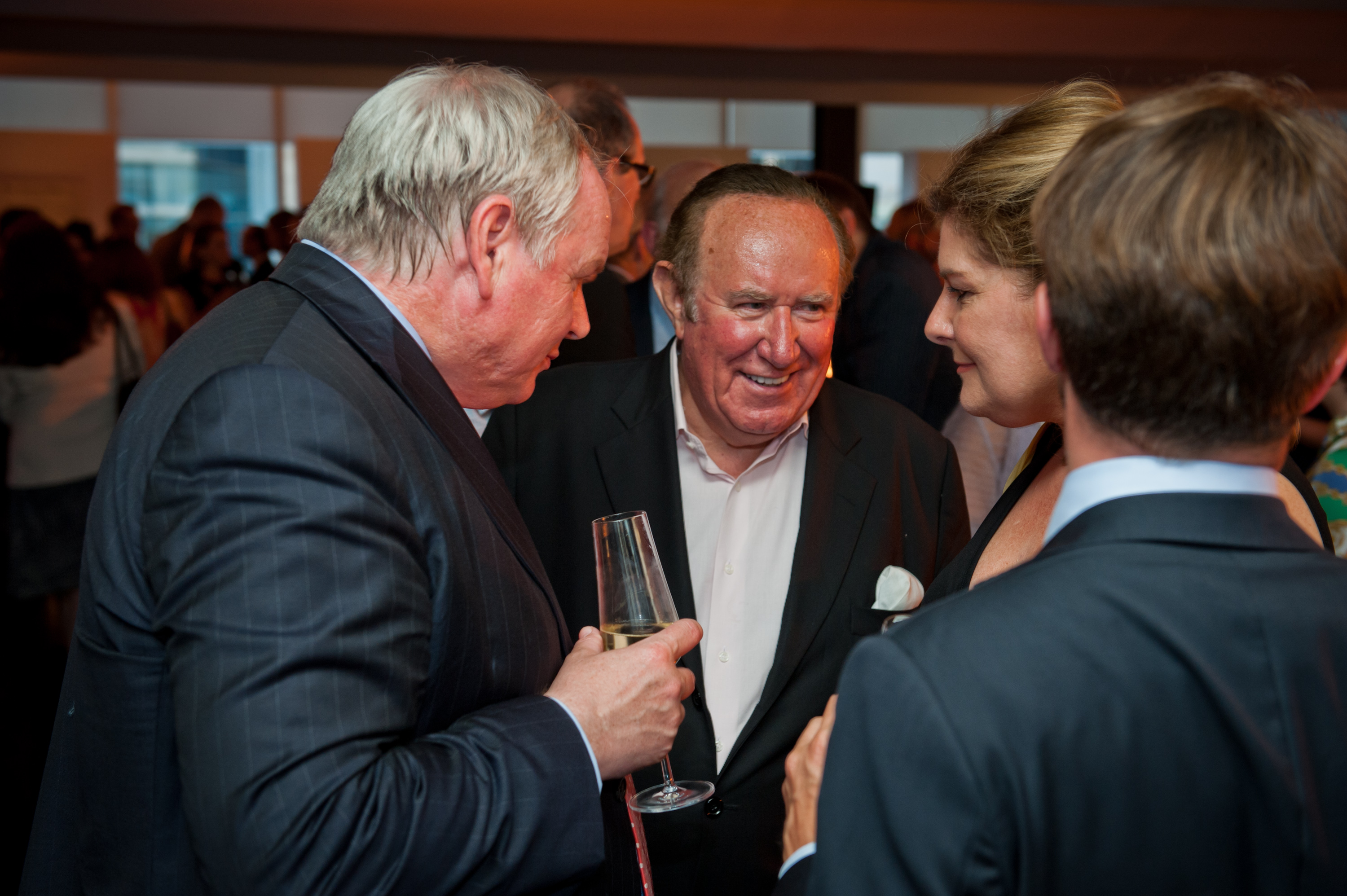 In 1988 he became founding chairman of Sky TV, also part of Murdoch's News Corporation. Neil was instrumental in the company's launch, overseeing the transformation of a downmarket, single-channel satellite service into a four-channel network in less than a year. Neil and Murdoch stood side by side at Sky's new headquarters in Isleworth on 5 February 1989 to witness the launch of the service. Sky was not an instant success; the uncertainty caused by the competition provided by British Satellite Broadcasting (BSB) and the initial shortage of satellite dishes were early problems. The failure of BSB in November 1990 led to a merger, but a few programmes acquired by BSB were screened on Sky One and BSB's satellites were sold. The new company was called British Sky Broadcasting (BSkyB). The merger may have saved Sky financially; despite its popularity, Sky had very few major advertisers to begin with, and it was beginning to suffer from embarrassing breakdowns. Acquiring BSB's healthier advertising contracts and equipment apparently solved the problems. BSkyB would not make a profit for a decade but by July 2010, it was one of the most profitable television companies in Europe.

At ''The Sunday Times'', he contributed to BBC, both radio and television. He commented on the various controversies provoked by the paper while he was editor. During the 1990s, Neil fronted political programmes for the BBC, notably ''Despatch Box'' on BBC Two.

Following the revamp of the BBC's political programming in early 2003, Neil presented the live political programmes, ''This Week'' on BBC One and ''Daily Politics'' on BBC Two. The latter ended in 2018 and was replaced by ''Politics Live'', which Neil presented until he left the corporation. From 2007 to 2010, he presented the weekly one-on-one political interview programme ''Straight Talk with Andrew Neil'' on the BBC News channel. He also presented ''Sunday Politics'' on BBC One between 2012 and 2017 and occasionally guest presented ''Newsnight'' on BBC Two following host Jeremy Paxman's departure in 2014. Neil played an important part of the BBC general election night coverage in both 2010 and 2015. Neil interviewed various celebrities on the River Thames for the 2010 election and political figures in the studio for the 2015 election. He also provided commentary on foreign elections, and with Katty Kay led the BBC's overnight live coverage of the US presidential election in 2016. In the run-up to the 2017 general election he interviewed five of the political party leaders on BBC One in ''The Andrew Neil Interviews''. Neil earned £200,000 to £249,999 as a BBC presenter in the financial year 2016–17. In May 2019, Neil interviewed Ben Shapiro, an American conservative commentator, on ''Politics Live'' on BBC Two. Shapiro was promoting his new book, ''The Right Side of History'', which discusses Judeo-Christian values and asserts their decline in the United States. Shapiro took offence to the questioning, accused Neil of having a left-leaning bias, and said Neil was trying to make a "quick buck... off of the fact that I'm popular and no one has ever heard of you", before Shapiro ended the interview. Shapiro later apologised for the incident. During the 2019 Conservative Party leadership election, Neil interviewed candidates Jeremy Hunt and Boris Johnson, in ''The Andrew Neil Interviews.'' Director of BBC News Fran Unsworth hailed it as "a masterclass of political interviewing". In August 2019, the BBC announced that Neil would host a prime-time political programme that would run through autumn 2019 on BBC Two, called ''The Andrew Neil Show''. The show included "in-depth analysis and forensic questioning of key political players". It was suspended due to the COVID-19 pandemic in March 2020 and then cancelled as the BBC went through with budget cuts. On 24 September 2019, Neil presented a live programme on BBC One entitled ''BBC News Special: Politics in Crisis'', addressing the Supreme Court judgement which deemed Boris Johnson's prorogation of parliament unlawful. In the run-up to the 2019 general election, Neil interviewed all the leaders of the main political parties, excluding Johnson, having delivered a monologue in ''The Andrew Neil Interviews'' issuing him a challenge to participate. On 15 July 2020 the BBC announced that Neil was in talks about an interview show on BBC One. The next month he was discussed in the media as Sir David Clementi's possible successor as Chairman of the BBC; he later said he had no interest in the role. The Director-General of the BBC, Tim Davie, on his second day in the role, held talks with Neil "in an attempt to get him back to the BBC" and it was reported that he was also in discussions with executives from commercial rivals. Neil's final appearance for the BBC was when he presented coverage of the 2020 US presidential election, again with Katty Kay.

On 25 September 2020, Neil announced his exit from the BBC to become chairman of GB News, a news channel set to launch in 2021. He will also present a prime time evening programme on the news channel.

Neil was a vocal and enthusiastic proponent of British military involvement in Afghanistan, deriding those who opposed the war as "wimps with no will to fight", while labelling ''The Guardian'' as ''The Daily Terrorist'' and the ''New Statesman'' as the ''New Taliban'' for publishing dissenting opinions about the wisdom of British military involvement. For questioning whether "Bush and Blair are leading us deeper and deeper into a quagmire", Neil ridiculed ''Daily Mail'' columnist Stephen Glover, calling him "woolly, wimpy" and "juvenile".