The New Zealand men's national rugby union team, commonly known as the All Blacks, represents New Zealand in men's international rugby union, which is considered the country's national sport. The team won the Rugby World Cup in 1987, 2011 and 2015. New Zealand has a 77 per-cent winning record in test-match rugby, and is the only international men's side to have secured more wins than losses against every opponent. Since their international debut in 1903, New Zealand teams have played test matches against 19 nations, of which 11 have never won a game against the All Blacks. The team has also played against three multinational all-star teams, losing only eight of 45 matches. Since the introduction of the World Rugby Rankings in 2003, New Zealand has held the number-one ranking longer than all other teams combined. They jointly hold the record for the most consecutive test match wins for a tier-one ranked nation, along with England. The All Blacks compete with Argentina, Australia and South Africa in the Rugby Championship, and have won the trophy sixteen times in the competition's 23-year history. The team has completed a Grand Slam tour against the four Home Nations four times (1978, 2005, 2008 and 2010). World Rugby has named New Zealand the World Rugby Team of the Year ten times since the award was initiated in 2001, and an All Black has won the World Rugby Player of the Year award ten times over the same period. Fifteen former All Blacks have been inducted into the International Rugby Hall of Fame. The team's first match took place in 1884 in New South Wales and their first international test match in 1903 against Australia in Sydney. The following year New Zealand hosted their first home test, a match against a British Isles side in Wellington. There followed a 34-game tour of Europe and North America in 1905 (which included five test matches), where New Zealand suffered only one defeat: their first test loss, against Wales. New Zealand's early uniforms consisted of a black jersey with a silver fern and white knickerbockers. By the 1905 tour they were wearing all black, except for the silver fern, and the name "All Blacks" dates from this time. The team performs a haka before every match; this is a Māori challenge or posture dance. Traditionally the All Blacks use Te Rauparaha's haka ''Ka Mate'', although players have also performed ''Kapa o Pango'' since 2005.

Introduction of rugby to New Zealand

Rugby union, known almost universally in New Zealand as just "rugby", was introduced to the nation by Charles Monro in 1870; he had discovered the sport while completing his studies at Christ's College in Finchley, England. The first recorded game in New Zealand took place in May 1870 in the city of Nelson, between the Nelson rugby club and Nelson College. The first provincial union, the Canterbury Rugby Football Union, was formed in 1879, and New Zealand's first internationals were played in 1882 when the "Waratahs" from New South Wales toured the country. The Australian team did not face a New Zealand national team but played seven provincial sides; the tourists won four games and lost three. Two years later, the first New Zealand team to travel overseas toured New South Wales, winning all eight of their games. A privately organised British team, which later became the British & Irish Lions, toured New Zealand in 1888. The visitors only played provincial sides and no test matches were played. Wales and Scotland were represented in the British team, but the players were drawn mainly from Northern England.

In 1892, following the canvassing of provincial administrators by Ernest Hoben, the New Zealand Rugby Football Union (NZRFU) was formed by the majority of New Zealand's provincial unions, but did not include Canterbury, Otago or Southland. The first officially sanctioned New Zealand side toured New South Wales in 1893, where the Thomas Ellison captained team won nine of their ten matches. The following year New Zealand played its first home "international" game, losing 6–8 to New South Wales. The team's first true test match occurred against Australia on 15 August 1903 at the Sydney Cricket Ground in front of over 30,000 spectators and resulted in a 22–3 victory. 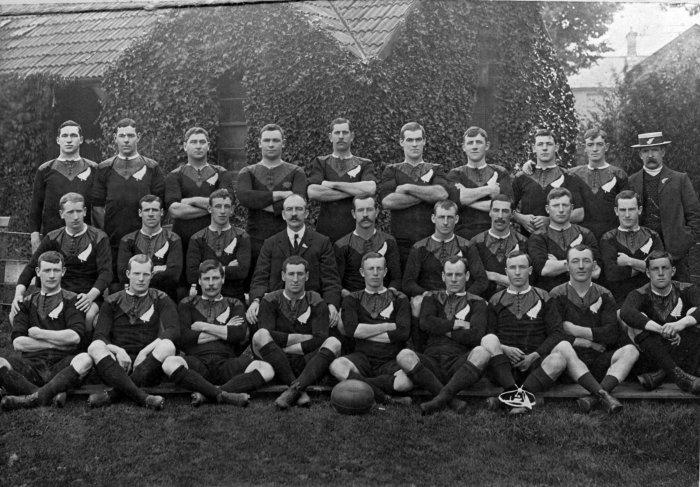 A representative New Zealand team first toured the British Isles in 1905. The side is now known as the "Originals", as the "All Blacks" name emerged during this tour when, according to team member Billy Wallace, a London newspaper reported that the New Zealanders played as if they were "all backs". Wallace claimed that because of a typographical error, subsequent references were to "All Blacks". This account is most likely a myth: because of their black playing strip, the side was probably referred to as the ''Blacks'' before they left New Zealand. Even though the name All Blacks most likely existed before the trip, the tour did popularise it. The Originals played 35 matches on tour, and their only loss was a 0–3 defeat to Wales in Cardiff. The match has entered into the folklore of both countries because of a controversy over whether All Black Bob Deans had scored a try that would have earned his team a 3–3 draw. In contrast to the success of the Originals on the field, the team did antagonise some in the Home Nations' rugby establishment; both administrators and the press complained that the All Blacks did not play the game within the amateur and gentlemanly spirit promoted by the International Rugby Football Board. This complaint continued to dog New Zealand teams until the 1930s. The success of the Originals had uncomfortable consequences for the amateur NZRFU. In 1907, a party of professional players was assembled to tour the British Isles and play rugby leaguea professional offshoot of rugby union that was played by clubs that split from England's Rugby Football Union (RFU) due to disagreements over financial compensation for players. When the "All Golds", as the team came to be known, returned they established rugby league in New Zealand, and a large number of players switched to the professional code.