Alexander County was organized from part of Union County in 1819. It was named for William M. Alexander, a physician who practiced in the town of America (the first county seat). Alexander was elected as a representative to the state House, where he became Speaker of the Illinois House of Representatives in 1822. The county was initially developed for agriculture and settled by numerous migrants from the Upper South. The county seat was moved to Unity in 1833, then to Thebes in 1843, and finally to Cairo in 1860. America, the first county seat, is now within Pulaski County, which was formed from Alexander and Johnson counties in 1843. Settled largely by white migrants from the Upland South, southern Illinois had many racial attitudes of the South. As African Americans settled in Cairo to seek jobs on steamboats, ferries, in shipping and railroads, there were tensions between the racial groups. White residents sometimes used violence and terrorism, as well as discrimination, to keep black residents in second-class positions. They excluded them from the city government and the police and fire departments, and relatively few African Americans were hired to work in the local stores. There were three lynchings of blacks in Alexander County in the years between Reconstruction and the early 20th century. The county had the second-highest number of lynchings of African Americans in all of Illinois. The most notorious of these was the lynching of Will James before a crowd of white spectators estimated at 10,000, in the county seat of Cairo, Illinois on November 11, 1909. James was accused of murdering a young white woman. Later that same evening, the mob lynched a white man named Henry Salzner, hanging him in the courthouse square for allegedly killing his wife. Neither man had had a trial, nor was anyone ever prosecuted for the lynchings, even though Illinois had passed an anti-lynching law four years earlier.

The Tamms Correctional Center, a now shuttered super-maximum correctional facility operated by the Illinois Department of Corrections, was located in Tamms, as was the State of Illinois execution chamber. Prior to the January 11, 2003 commutation of death row sentences, male death row inmates were housed in Tamms, Menard, and Pontiac correctional centers. After that date, only Pontiac continued to host the male death row. On January 4, 2013, after years of controversy over inmate conditions, the prison officially closed, negatively impacting the county's economy. In late September 2009, press reports indicated that the Alexander County Sheriff's office had five of its seven squad cars repossessed as payments had not been made. The sheriff once had 29 deputies, but was reduced to just five at the time of the reports. The Illinois State Police have provided assistance to the county with additional patrols. 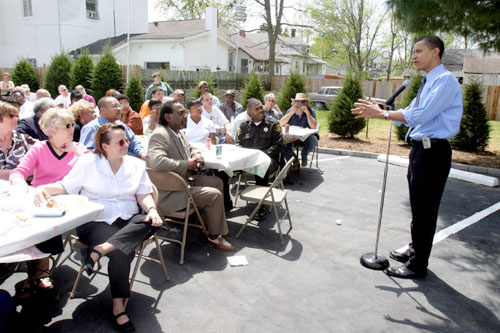 Alexander County is unique among antebellum free state rural counties in having a postbellum political history largely determined by a previously disfranchised black electorate. It is most similar in this respect to – though still substantially different from – some counties of the south and the Eastern Shore of Maryland. The county was thus solidly Republican until the New Deal, and gradually turned solidly Democratic until the presidency of Bill Clinton. In the twenty-first century, the county has shown a trend towards the GOP due to large-scale black emigration and a rapid swing of its Caucasian population toward Republican candidates. This became clear in 2016, when Donald Trump carried the county by 8.3 points—a hard swing from favorite son Obama's 13.6-point victory four years earlier, and the first time the county voted Republican since 1972. An even harder swing was taken in 2020, when he carried Alexander again by 14.2 points, even as the nation as a whole trended slightly leftward. Despite the rightward swing taken by the county, the city and county seat of Cairo remains overwhelmingly Democratic.